Let's go to the movies. Start up the time machine.

Puttin' on the Ritz 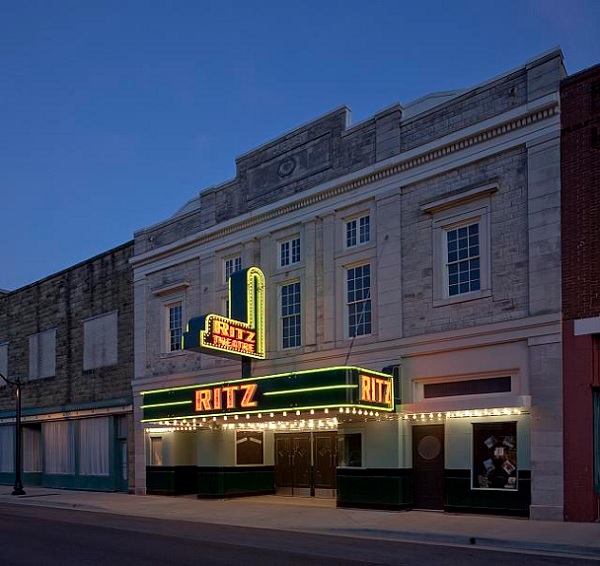 This is a lovely photo by Carol M Highsmith, the gifted photographer who generously gives all her Americana photos to the Library of Congress. It shows a restored 1920s cinema in Sheffield, Alabama.

'Puttin' on the Ritz' was a popular phrase back in the Jazz Age. We bet you knew that. We even bet you've got something vintage – a theatre, a cinema, a restaurant, a hotel – with the word 'Ritz' in its name in your area, too.

But you might not have known that there was a Sheffield in Alabama. Nobody in Alabama seems interested in explaining how Sheffield – population 9, 500, give or take – got its name. Only that Andrew Jackson used to own a lot of property there, and that it's close to Muscle Shoals on the Tennessee River.

If the Tennessee River were in Europe, it would be famous. It's big and pretty. But since it's in North America, nobody except the Tennessee Valley Authority pays much attention to it, unless they want to go fishing.

Muscle Shoals is more of a puzzle. Theories abound as to how it got its name. Were there mussels on those shoals at one time, and they just couldn't spell? (Andrew Jackson's been accused of bad spelling before.) Or was the bend in the river shaped like a muscular bicep? Or was it that the Indians complained that you needed real muscles to paddle a canoe against the strong current? Take your pick.

Maybe somebody will make a movie about it. And it can star actor and former Senator Fred Thompson1, because he was born in Sheffield. Sean Bean can be in it, too, but his kind of Sheffield accent might clash with the rest of them, who tend to drawl a lot. Fans of The Prisoner take note: the term 'The Village' has a different connotation. In Sheffield it was a model town, and an aerial view shows that it's shaped like the Liberty Bell. One street even resembles the crack in the bell.

Now, that's puttin' on the Ritz.

1Known to fans of Law & Order.