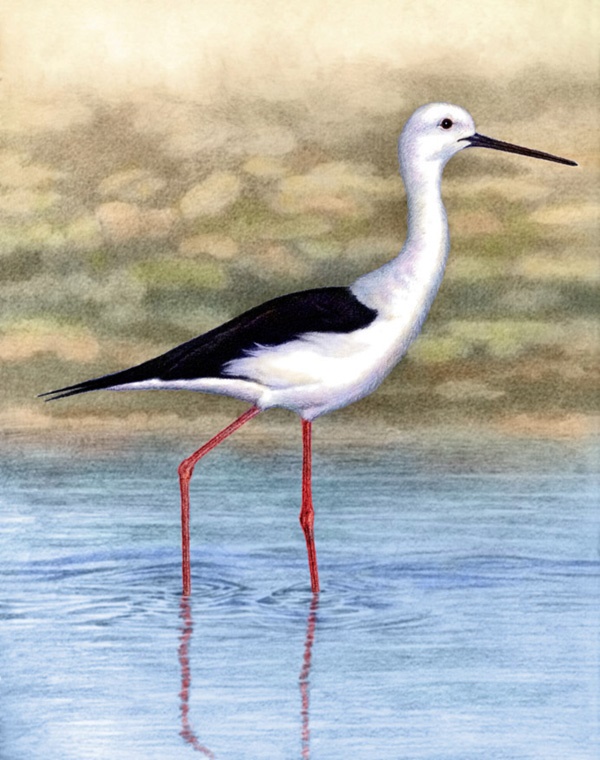 Here I feature a most lovely and elegant little bird! This is a Black-Winged Stilt, Himantopus himantopus. The scientific name means 'strap-foot'. The scientific and common names refer to this bird's exceptionally long, thin legs. An adult black-winged stilt reaches a head-and-body length of about 38 cm/15", but stands quite a bit taller than that due to its long legs. They also protrude far beyond its tail when it is in flight. The long legs of the stilt are indeed very useful, for it is a wading bird. Stilts can wade into much deeper water than other birds their size. In my painting the stilt is in shallow water, but they will often wade into deeper water until it reaches their bellies and they seem to be floating on it like ducks!


In Afrikaans, stilts are called 'elsies'. An 'els' is an awl, this referring to the thin, sharp bills of these birds. The name 'elsie' is also used for the Avocet, a close relative of the stilts.

It is mostly a sorry tale, that of human interference with nature. People have destroyed or degraded much of this planet, rendering it hostile to the critters that used to inhabit it before we came along. But in a few cases, human influences have actually created new living environments for creatures. The black-winged stilt is one of those fortunate critters who have actually benefited from human activity – at least here in South Africa. Regular readers of my columns will know that South Africa is by and large a dry country, with about half of it receiving less than 500 mm/20" of rain per year. We have few perennial rivers or large wetlands. In the past, black-winged stilts were likely birds of mostly coastal regions, staying around river estuaries and lagoons. When humans in South Africa started to conduct large-scale agriculture, they made plans for dealing with the lack of water. Today, every farm has at least one dam to impound some water that can be used for irrigation or for hydrating livestock. There are lots of large national dams also. These form the very kind of ponds and lakes that the stilts frequent. Today, black-winged stilts are found all over South Africa.


I am therefore fortunate to have seen lots of these wonderful birds. They are especially frequent visitors to the Polokwane Bird Sanctuary. They occur there in small flocks. They are very easy to spot with their bold black-and-white plumage. If seen clearly, the adults can't be mistaken for anything else (though the youngsters have dull plumage and can be mistaken for greenshanks or other sandpipers). They forage in the water with a high-stepping gait, pecking up insects, crustaceans, molluscs and other small aquatic critters from the water surface with their fine beaks, sometimes dipping their heads and necks into the water. They do occasionally swim into deeper water. If alarmed they launch themselves straight into the air and utter a 'chek-chek-chek' alarm call. In flight, they're equally easy to identify with their long, red legs stretching out far beyond their short, white tails. They give a variety of other calls, these being yipping calls a bit like small puppies.


Unfortunately, the thin legs of stilts are fragile, and I've seen a few of them hobbling around on broken legs, a very sad sight.


Black-winged stilts can breed in most months of the year in South Africa. Their nests are very simple, though made in a variety of different situations. They can be hollows scraped in open ground, lined with leaves and pellets of mud. They can also be mounds of vegetation, built up in shallow water so that their tops are dry. They can also be on floating aquatic plants like water lilies. Black-winged stilts may breed singly or in small groups. Pairs are monogamous. The female typically lays three or four eggs. Parent stilts are very wary and will perform distracting calls and displays if they think their nests or chicks are threatened. Sometimes they feign being injured. The baby stilt is born fluffy and with open eyes. It can walk and wade and feeds itself, only accompanying its parents for the sake of safety. It fledges in about a month.


Stilts of the World

The black-winged stilt is actually a very widespread bird species. It occurs in suitable wetlands all over Africa, and also in the warm and temperate parts of Europe and Asia. Different species, or subspecies, replace it in Indonesia, the Philippines and Australia. In New Zealand, an all-black stilt occurs which is very rare. In the Americas, the stilts look a bit different, having black patches on their heads and necks, but are otherwise very similar. In this group, another very rare form occurs, the Hawaiian Stilt, which has suffered mainly as a result of habitat destruction and human-introduced predators. Both the New Zealand black stilt and the Hawaiian stilt today are the focus of intensive conservation efforts, so let's hope they make it!