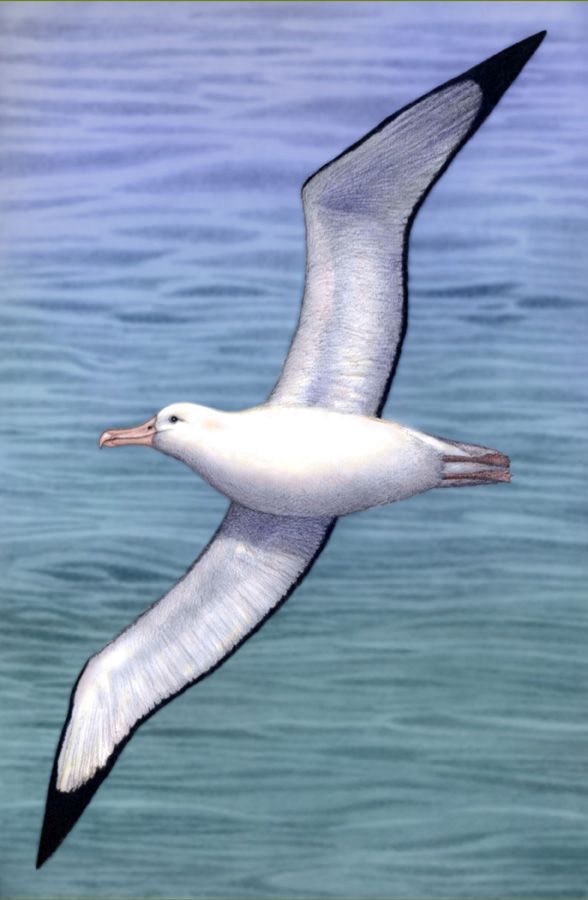 This time I bring you a most superlative bird. This is the Wandering Albatross, Diomedea exulans. The scientific genus name honours the heroic Greek warrior Diomedes, whose companions according to one legend were turned into birds, while the species name means 'exiled'. The way this albatross wanders all over the ocean suggests that it is roaming restlessly after being banished from its true home. The wandering albatross is the largest of all the albatrosses. Recently two species have been split off it, the Tristan Albatross, and the Antipodean Albatross. These are either very closely related separate species, or they are sub-species of the wandering albatross.


Albatrosses are members of the tube-nosed birds or Procellariiformes. All birds in this group have bony tubes on top of their bills by which the nostrils open to the air. They also have salt glands in their nasal passages that extract salt from the seawater that these birds ingest as they feed. The salt is expelled from the nostrils. All the tube-nosed birds can therefore survive feeding from the ocean without needing to drink any fresh water at all.

This albatross's claim to fame is its wings! Its wingspan is the greatest of any living bird's. There have been claims of absurd wingspans such as 6 m/20' or more, but reliable measurements top at around 3.6 m/12'. Albatross wings are extremely long and narrow. They are fairly rigid at the shoulder, for stability, and can't flap much. Albatrosses use these wings for soaring low over the ocean waves, using the wind blowing over their crests to provide them with lift. They can often go long distances without having to flap their wings at all. They do on occasion soar high in the sky. They travel vast distances, one banded bird having been recorded as covering 6 000 km/3 750 miles over twelve days. They only settle down on the water to rest, floating on the waves like corks. They feed mainly on squid; these they snatch from the water using their long bills with sharply hooked tips. They can dive down a short distance into the water. They feed mostly at night, which is the time when the squid rise to the ocean's surface. They sometimes feed on offal from fishing boats, or on refuse thrown overboard from other boats and ships. They often follow ships by weaving back and forth across their wakes, or circling them. They fly fast and low, the tips of their wings sometimes skimming the water. They use minimal wing motion to manoeuvre, making excellent use of air movements over the water so as to get speed and height.


The extreme wings of these albatrosses can be an encumbrance sometimes! When down on land or on the water, they can't flap their wings very much, these being too long. On water they need to wait for a strong wind; turning head on into this they have enough air flowing over their wings to give them lift. On their breeding islands (see below) they often have runways facing into the prevailing west winds. Running down these, they can get enough airspeed to get themselves airborne.

Wandering albatrosses are found in the southern oceans. They occur offshore from South Africa, preferring the deeper rather than the shallow coastal waters. They breed on subantarctic islands. These are small and isolated islands, experiencing year-round cool to cold weather, and covered only in sparse shrubby or grassy vegetation, if any. The benefit for albatrosses is that these islands support no predators. Albatrosses form couples that mate for life – which can be quite long; they have been known to reach ages of fifty years or more, and still manage to breed. The male and female strengthen their bond by complex displays, performed on the nesting islands. The do a kind of dance where they spread their wings, with a slight bend in the wrist, stretch their heads skyward, and circle each other with short steps while swaying their heads, clapping their bills and uttering croaks, brays and squeals. They affectionately touch their bills together, which we might well think of as kissing.


Once mated, they build their nests. These are situated on plains or ridges on the islands, and are fairly tall mounds made from mud and vegetation. The top is a hollow cup in which the female lays a single egg. The male and female incubate it in shifts which may last days or even weeks! The egg takes two months to hatch, after which the parents feed the chick on regurgitated squid and oil. The chick actually grows much bigger than its parents! Some chicks can exceed 16 kg/35 lbs in bodyweight, while the parents are a much more svelte 9 kg/20 lbs or so. When the chick fledges it loses most of this weight again. At the end it is left alone for long periods while its parents concentrate on feeding themselves again. It fledges at around nine months of age. At first it is chocolate brown, with only its face being white, and then as it grows older more and more of its plumage turns white. At the age of five or six years, it has the full adult plumage, being white except for having black tips and margins to its wings. It starts breeding itself at about nine years of age. Because breeding takes so much time and effort, wandering albatrosses breed only every second year.


Although wandering albatrosses are reasonably abundant and secure today, they are vulnerable to several factors. Their breeding colonies are being monitored by scientists so we can learn more about their reproduction. Because of these colonies being on predator-free islands, the nesting birds are almost completely free from fear of humans. It is possible to walk right up to a nesting female, lift her off her nest to weigh her, take measurements, draw blood, and inspect the egg or chick, without causing her any concern.


Albatross around the Neck

Samuel Taylor Coleridge's poem, 'The Rime of the Ancient Mariner', features an albatross. In the poem, the titular mariner kills the albatross following his ship. This was a wantonly cruel deed that brought mischief down on him and his ship. The albatross was hung around his neck as a sign of his shame … today, this image is still used for a burden or a shame encumbering a person. In reality, in the days of the exploration of the southern oceans, many sailors saw albatrosses as birds of good omen and did not kill or disturb them, but some humans did indeed hunt them for meat or for their bones, these being suited for making pipe stems. The Maori of New Zealand made even more items from albatross bones, such as flutes, needles, tattooing blades, and fish hooks. Today albatrosses are less at risk from direct hunting than from being unintentionally caught during large-scale long-line fishing, and from pollution of the ocean.


Huge Wings of the Past

Although this albatross represents the extreme in wing length today, there used to be birds (and other things) with even greater wingspans in the past. The false-toothed birds, or Osteodontornithids, an ancient family that have all died out, included some huge ones, the largest currently known being Pelagornis sandersi, with a wingspan that might have exceeded 7 m/23'!. They, too, were most likely soaring, oceanic birds, quite formidable in appearance with their toothed bills. Then there were the Teratorns, or monster birds. Related to the huge condors of the New World, they were even bigger; the largest species, Argentavis, might have had a wingspan exceeding 6m/20'. Its wings were also extremely broad, necessitated by the sheer size of this vulture-like thing which might have reached more than 70 kg/150 lbs in bodyweight. But even these birds were dwarfed by the ancient pterosaurs. These were not dinosaurs as some people think, but a related group. The largest pterosaurs, such as Quetzalcoatlus and Hatzegopteryx might have had wingspans exceeding 10 m/33'. Just how heavy they were is still controversial. They probably had extensive air bags in their bodies and bones, and so were lighter than they looked, but even so, the enormity of the largest species suggests that they might have been as heavy as 250 kg/550 lbs, which is incredible for a flying creature. At least some scientists have, on this basis, speculated that they might not have been flyers at all … but their wings and the rest of their build make it a fair certainty that indeed they were capable of flight.