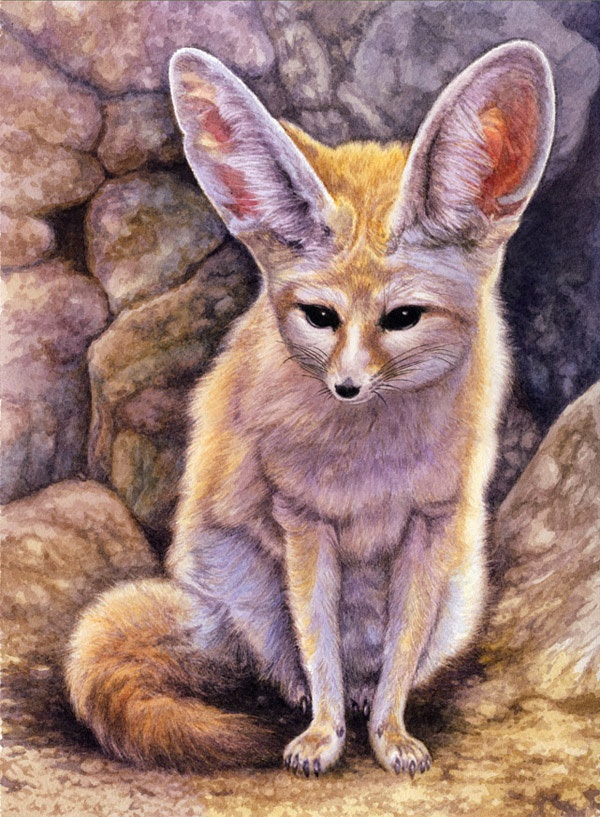 This time I have another cute little critter for you! This is a Fennec, Vulpes zerda. Fennecs are sometimes called Fennec foxes, but 'Fennec' already means fox ('fanak' in Arabic) so that's redundant. The genus name 'Vulpes' also means fox, and is shared with several other fox species. Fennecs are the smallest foxes in the world, and indeed the smallest members of the dog family. They stand around 20 cm/8" at the shoulder, and weigh from 0.7-1.6 kg/1.5-3.5 lbs. They have the largest ears for their size of any fox, though! They live in deserts, the species name zerda being derived from the Greek word 'xeros' which means 'dry'. They occur all over the Sahara Desert of Africa, and also in northern Arabia as far as Kuwait.

Fennec ears are indeed as big as they are for a reason. First, the ears are thin and have dense networks of small blood vessels in them. These can radiate heat into the outside air, keeping the little fox cool during the worst of the desert heat. During the cool or even cold nights, fennecs are kept warm by their dense, fluffy fur. They even have fur on the bottoms of their feet. This also protects them when they walk on the hot sand.


But fennec ears also have a more direct function. Fennecs are nocturnal, coming out to hunt at night. They catch all manner of critters even smaller than themselves, such as lizards, rats and mice, small birds, and insects. Though they have large eyes with good vision, and a good sense of smell as well, they use their ears especially to tell them where prey might be. Their ears are very mobile, and they can swivel them around to pinpoint the sources of sounds. They can hear insects burrowing underground, and will dig them out. They’re good leapers, and will stalk prey on the ground surface and then try to catch it with a swift, final pounce. Fennecs will also eat birds' eggs, wild fruit and roots. They have very efficient kidneys and extract all the water they need from the food they eat, but will drink water if it's available.

Most fox species are not very social. Fennecs, however, do have fairly complex social lives. They farm small packs, usually composed of related individuals, a pair and their offspring of a year or few mostly. Youngsters as well as adults are very playful. Packs can number up to ten individuals. They communicate with barking, chattering, chirping, whimpering and wailing calls. They proclaim their territories with a brief howl that descends in pitch. They purr like cats when content, and snarl and growl when threatened.


Their lives are centred around their burrows. For this, fennecs need sand that is not too loose to dig in. They can dig out quite extensive burrow systems. Inside, the resting chambers are lined with grass to make them cosy. Burrow systems can have as many as fifteen entrances and exits.


The mating season for fennecs is in late winter, and they give birth in early spring. A pair mates for life. The male appears very possessive of the female, defending her against others. He also brings her food during her gestation and afterwards when she's nursing the kits. The litter consists of up to five kits, and they are born blind and helpless. Their ears are folded at birth. Their eyes open at the age of around ten days, and their ears also start straightening out then. Their mother suckles them for the first two months, and they are physically mature at the age of six months, and sexually mature at nine months. Fennecs in captivity can live for 14 years.


In the wild, the greatest threat to fennecs are eagle owls. These large predatory birds can find the little foxes in the dark and easily kill them. But fennecs are too wary and wily for practically anything else to catch. Only humans are able to trap them. Their fine fur is esteemed in some places, and they're also caught to display or to sell as pets. They are not really tame or tameable like dogs or cats. The fennec is the national animal of Algeria. Because of their very wide range, they are currently not considered to be in danger of extinction.