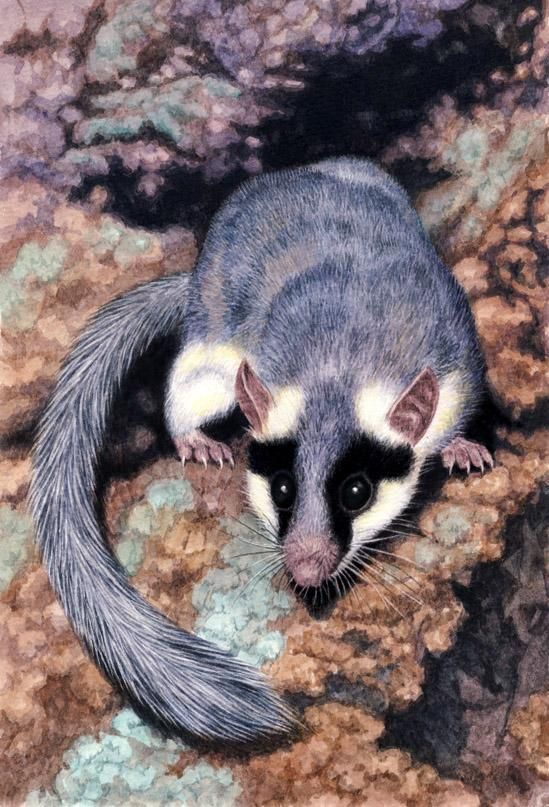 This week's critter is a Spectacled Dormouse, Graphiurus ocularis. In Afrikaans we know it as a Gemsbokmuis or Gemsbok Mouse, because of its bold black and white face pattern that resembles that of a Gemsbok.

Dormice are not mice at all. They belong to a separate family, the Gliridae (sometimes called the Muscardinidae or the Myoxidae). They have also been confused with squirrels, but they are not those either. They constitute an ancient family of their own, the earliest known fossils of them dating back to 40 million years. They do belong to the Rodent order and may indeed be closer to squirrels. They can be recognized by their pointy, mouse-like faces, combined with their bushy, squirrel-like tails. Most species are much smaller than (regular) squirrels but here in Africa the issue is complicated by a number of tiny squirrel species, including the mouse-sized Pygmy Squirrel. But these are still squirrel-like in general appearance and behavior, and so can be distinguished from dormice given a good look.


The name 'Dormouse' also isn't really supposed to imply that they are mice. It comes to English via the Anglo-Norman word 'dormeus', which means 'the sleepy one'. The modern French word 'dormir' ('to sleep') comes from the same Latin root. The idea of dormice being sleepy actually comes from them hibernating in the winter – at least, dormice in temperate and cold regions do so. Hibernating dormice are almost totally inert. They curl up in a tight ball and might be taken from their cozy nests and rolled around without waking them up. This is of course nothing like ordinary sleep. A hibernating dormouse is in a kind of suspended animation, its body temperature almost at freezing and its breathing and heart rate tremendously slowed down. It is not a state it can exit from easily. But it conserves a great deal of energy, allowing these small rodents to survive through an entire winter without food.


The sleepy dormouse is a memorable character in 'Alice in Wonderland' by Lewis Carrol (nom de plume of Charles Lutwidge Dodson). It there is used in a nice demonstration of logic, saying that 'I breathe when I sleep' is not the same thing as 'I sleep when I breathe' … only, it was not quite the best person to demonstrate the principle since, as the Hatter remarked, in its case the two statements are indeed equally true.


The dormice that hibernate put on a lot of fat during the late summer to help them last through the winter. This has, in the Fat or Edible Dormouse, led to its consumption by humans! Since the time of the Romans, or perhaps even before them, people have raised these dormice as food. Dormouse fat has also been used as a folk remedy for sleeping problems. All of this doesn't happen much anymore, and today the Edible Dormouse is a protected species in Britain.

African dormice are different from those found in Europe and the colder parts of Asia. They are considered 'primitive' and generalists compared to those. They generally don't hibernate, but do sleep in cozy nests in holes in trees or rock crevices, and do put on fat during times of plenty to last them through periods of scarcity. In Africa, those are more correlated with the absence of rain than with cold. In the southern parts of South Africa, though, there is significant cold over the wintertime, and here they might indeed hibernate. But this has not been studied much, and it seems the local dormice rather just sleep longer than usual when the weather is cold, and may be lethargic on cold days. But the Spectacled Dormouse may actually hibernate for as long as a month in the coldest parts of its range.


The African dormice constitute a single genus, Graphiurus. Nevertheless, this genus displays quite a lot of diversity. The Spectacled Dormouse I illustrate here is the largest species. It reaches 25 cm/10" in total length, and 85 g/about 3 ounces in weight. The smallest African dormouse, the Lesser Savannah Dormouse, is also found here in South Africa, and only reaches about 18g/about two thirds of an ounce. A weird species occurring here is the Rock Dormouse, which has a flattened skull, adapted for easily squeezing into narrow rock crevices. Then there are many more typical woodland, savannah and forest-living dormice species. The group as a whole has been little studied here in Africa, and it is easily possible that new species await discovery. But even more certain is that there are many fascinating behaviours that we have yet to record.

What we do know about the African dormice is that they are much more carnivorous than most other rodents. Their digestive system is unspecialized and they cannot digest cellulose as other rodents can. While they do eat seeds and fruits, they also eat lots of insects, and even lizards, birds and small mammals up to their own size! In captivity, they can be fed meat. They will also eat birds' eggs and carrion if they can find it. They creep up on their prey and then pounce and kill it with bites from their sharp gnawing teeth. In South Africa, many dormice have the white fur on their throats and bellies stained brown, probably from the juice of certain species of insect.


They are very active and agile. The males of some species aggressively defend their territories against others, but other species are social and form small groups sharing a single resting nest. Dormice are vocal, producing a variety of sounds including clicks, growls, whistles and shrieks. Very strangely for a mammal, their tails are detachable like those of lizards! A dormouse may lose its tail during a confrontation, and subsequently a new tail will grow – but not a proper tail containing muscle and bone, instead just a long, loose brush of hairs.


The Spectacled Dormouse is not just the biggest but also the boldest marked sub-Saharan African dormouse. Its general body colour is grey, against which the black face mask bordered by white cheeks and chin contrasts markedly. It has white patches above its ears and a whitish belly as well, and long white-tipped hairs on its tail. Despite this dormouse being very striking, it is rarely seen. We know little about it, not even which habitat it prefers! It is found over much of southern and central South Africa, in regions of semi-desert, scrub, grassland and rocky hills. It can be assumed that it is less associated with trees than most other dormice, and probably nests in rock crevices. But some specimens have been collected from trees. It might therefore be quite adaptable.


This dormouse does have a specific adaptation. It has sharp tubercles (warty growths) on the soles of its feet. With these it can not only climb trees, but even go easily up sheer rock faces! It often lives in areas with high cliffs. When hunting, this species seems to prefer to clamber over rocks and trees and bushes rather than walking on the soil surface. A paired male and female will share a territory, laying down scent trails as far as they go to mark it as theirs.


The noises the spectacled dormouse makes are similar to those of other dormice. It has an aggressive spitting call, followed by a lower growl, that it gives when confronted. Two male dormice that come into conflict will approach, calling, the calls becoming louder and faster the closer they get to each other. If the call doesn't intimidate the intruder, the two might fight. The loser might not only be killed – but eaten as well!