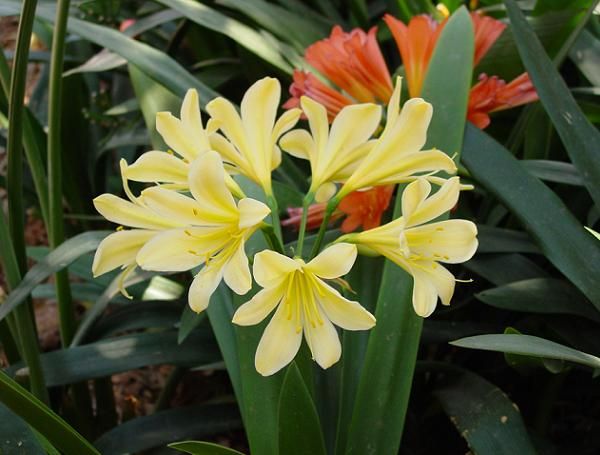 Usually I include a drawn or painted picture but this time I have three photographs of some magnificent specimens in a friend's garden that I don’t think I am able to improve upon! These are bush lilies, or Clivias, scientific name Clivia miniata. The genus Clivia is restricted to South Africa and Swaziland (a small country half enclosed within our borders), and includes six presently known species. This one is the most frequently cultivated one, but you do see some of the others in gardens from time to time. The other species have smaller, downward-hanging flowers, but are also all very handsome. The genus was named in the early nineteenth century for Charlotte Percy, née Clive, duchess of Northumberland, who apparently grew and flowered them in Britain for the first time. The species name miniata means
'the colour of red lead' … not that I've ever seen red lead, so I don't know how appropriate this is. 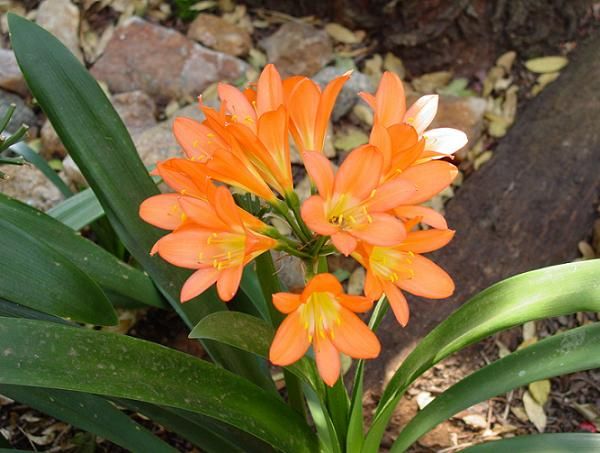 Of the three photos you see here, the orange one in the middle shows the most widespread natural form of the bush lily. These lilies grow on the shady floors of forests, and can be found from the Eastern Cape northward as far as Mpumalanga. I've seen clivias in the forests to the east of where I live; I'm not sure they were this species as they weren’t flowering. But what’s interesting is that, while most grew where they were supposed to, in the understory, some were growing up in the trees, as epiphytes!


Apart from the flowers, Clivias are lily-like plants with clumps of long, broad, deep green, strap-shaped leaves. Unlike most related plants, they don't have subterranean bulbs, but instead grow from underground, branching rootstock called rhizomes. The clumps of leaves grow to a height of about 50 cm/20", and the flowers are borne just above the leaves. Clivias are members of the Amaryllis family, which contains many other spectacular flowering species. 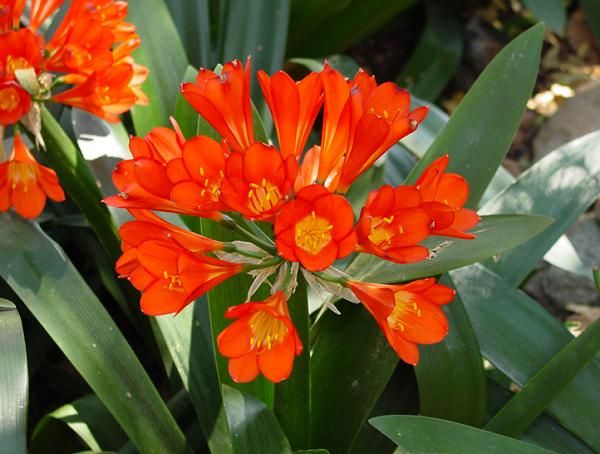 Since their discovery around the beginning of the nineteenth century Clivias have been exported and grown in other countries, first Britain, but soon the whole world! They are some of the easiest plants to grow. They are only vulnerable to frost, since they bear leaves year-long, not having a dormant period. In cold regions they flourish as houseplants, doing well indoors since they're adapted to the shady forests. They are not very demanding, not needing lots of water. In South Africa they can survive droughts of several months. They do prefer well-draining soil rich in compost, manure or other organic material.


Clivias are currently being bred into new forms by enthusiasts worldwide, and especially in Japan. This species is frequently hybridized with other Clivias. I am personally not that into hybridization, feeling we first need to work on conserving and propagating species as they are in nature. But some interesting forms have emerged from the worldwide breeding efforts. I think the red form that I include here is a cultivar, I'm not sure it occurs in nature. But the yellow one is in fact a form that comes from nature, called Clivia miniata var. citrina.


One nice thing about bush lilies is that they flower for long! Most flowers arise in the spring, but they can appear on the plants at any time of the year. A mass of clivias planted beneath a tree can be a spectacular display when they all flower together.


It is easy to grow Clivias: the clumps multiply automatically from year to year by way of the branching rootstock. Clumps can also be detached and planted in separated beds. Clivias are not hard to grow from seeds too. The flowers will be naturally pollinated by insects like butterflies; the flowers will fall off and the red, berry-like fruits will form at the top of the inflorescence. Remove the pulp from the ripe fruit, and plant the seed – actually, just press it into the surface of the planting medium, leaving the top half exposed. A good planting medium is similar to the preferred growing medium: loose and well-aerated with lots of compost. Keep them moist, and watch out for algae growing over the seeds – these will reduce the oxygen to the seeds, so remove them. The seeds will if all goes well germinate in four to six weeks. Leave the plants to grow there for a year or two before planting the seedlings out into individual pots, bags or garden beds.


Clivias grown from seeds will take a few years before flowering. They prefer positions with dappled shade … not full sun but also not deep shade; they need some sun to flower well. If you have children, warn them about this species, since it is poisonous … most particularly the attractive red berries should not be eaten! You should also wash your hands after handling the plants or their berries and seeds.