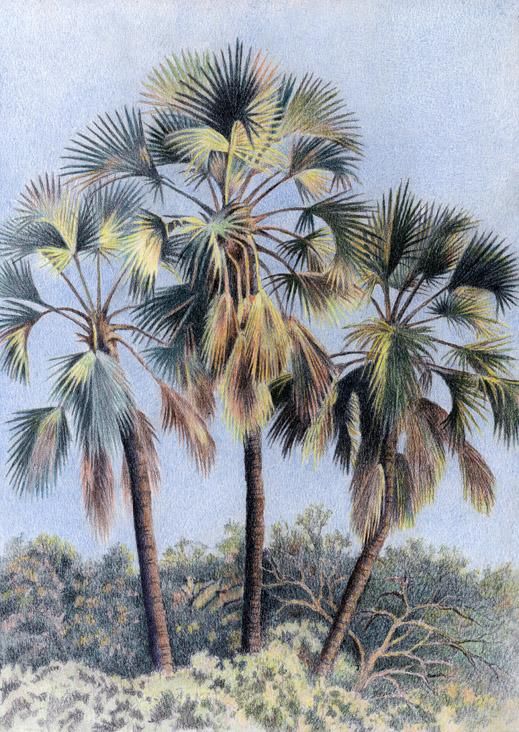 South Africa has a wealth of weird plants and indeed an overall record number of plant species compared with any other similar-sized region outside the tropical rainforest belt. But for some reason it has a dearth of palm species! The island of Madagascar, half the size of South Africa, has 170 species of indigenous palms … South Africa has only six! And of those six, only three are reasonably common. The Northern Lala Palm, Hyphaene petersiana, is one of those. It is sometimes confused with the Southern Lala Palm, Hyphaene coriacea, which is as the name indicates mostly found further to the South. The Northern Lala Palm is the one commonly seen in the Kruger National Park, usually in the valleys of large savannah rivers, and has round fruits. The Southern Lala Palm is found close to the coast, in Kwazulu-Natal and the Eastern Cape, typically in scrub on sand dunes, and has pear-shaped fruits.


The Northern Fan Palm is not a particularly big palm, but still one of the tallest found in South Africa, growing to a height of 18 m/60'. These palms usually grow in clumps of several stems. Particularly fine groups of specimens can be seen in the Letaba rest camp in the Kruger National Park. The leaves at the top can reach a length of 2m/7' and are fan-shaped, with the tips curving backward, greyish green in colour, the old leaves at the bottom drying to yellowish or brownish. The leaf stems are armed with backward-curved prickles. The densely branched inflorescences arise from the tip of the stem among the leaves, and the round, dark-brown fruits are up to 5 cm/2" in diameter. Only female palm trees bear fruit.


A Home for Swifts 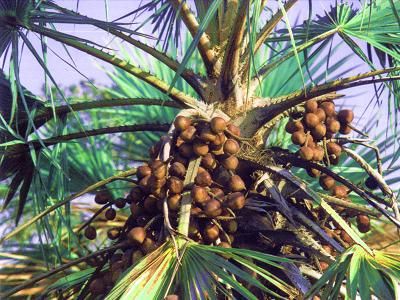 One of South Africa's most commonly seen swifts is the Palm Swift, Cypsiurus parvus. It is a tiny bird, dark greyish with a long, forked tail. Like other swifts it has tiny feet and cannot come down to the ground or perch on twigs. These swifts are very dependent on palms. They can cling on to palm leaves. The Lala palms have 'skirts' of dry leaves that remain on the trunk below the active green leaves. The palm swifts use these as home roosts, and also build their nests on these hanging, dry leaves. With their own sticky saliva they paste together a small bundle of feathers to the underside of the leaf; then they glue their eggs to this as well! The brooding mother swift presses her body close to the nest and eggs; when the chicks hatch they cling to the nest as well with their sharp claws. Before European settlers came to South Africa, palm swifts were restricted to regions where Lala palms and a relative, the Borassus palm, grew. But since then many people have been planting fan palms originating from other countries in towns and gardens, and this has helped palm swifts extend their range enormously.


Also Attractive for Other Wildlife

Other birds also like making their nest among the prickly leaf bases of these palms, most particularly the strange songbirds called the Palm Thrushes that nowadays seem to be closer relatives to flycatchers than thrushes. Elephants will browse the large leaves and growing stem tips, sometimes killing plants. But they also eat the fruits, which have a sweet, fibrous outer layer over a hard shell. Passing the seeds through their dung they weaken the seed coats making it easier for them to germinate. Baboons also eat the fruit.

But humans also make use of these palm trees. People can eat the fruit pulp too, and inside the seed is a tiny bit of milky sap like coconut milk, which is highly sought-after in some communities in Namibia and Botswana. But the seed also has a very hard, white substance within, which is called vegetable ivory. (The term also applies to the similar hard, white substance in some palm trees of South America). While there's not much of it, it can be carved into attractive small ornaments and is often used to decorate walking sticks.


But utilized on a greater scale is the sap in the trunks of these palms. To gather this, people first set a fire around the base of the palm. This removes the old, dry leaves and the prickles that otherwise make the palm's growth tip inaccessible. They then make a cut near the tip; the sap oozes out and is gathered. But as the sap dries it hardens and makes a crust, closing the wound; then the wound has to be opened again. Repeatedly cutting into the growing tip like this eventually kills it and the entire stem will die. But if allowed the palm will form new stems from suckers around its base. Unfortunately in many cases the trees are completely killed by careless sap-gathering.


The sap that is gathered like this is used for making a popular kind of wine. After gathering the sap is left to ferment for about 36 hours. It is sweet and said to taste somewhat like ginger beer with a hint of hops beer. Palm wine is rich in vitamin C, potassium, nicotinic acid and other nutrients. Undiluted it has an alcohol content of about 3.6 percent. As such it is quite mild, but can be distilled into a much more potent spirit that is said to be highly intoxicating.


Apart from vegetable ivory and palm wine, this species also yields leaf fibres that are used for weaving mats and baskets. The strips of leaf can be boiled in dyes of different colours before being woven into very attractive baskets that are not only practically useful but also pretty enough to be sold to tourists.

This is a very difficult plant to grow, unfortunately. The seeds germinate with difficulty. In nature, the animals that swallow the seeds and defecate them weaken the seed coats making germination easier, and this can be simulated by removing the fruit pulp and cracking the seed in a vice – but this can damage the embryo. But some seeds will germinate on their own, and since large palms produce thousands of fruit they can be planted in bulk. This is difficult for a small-scale grower, though.


Furthermore, even the seeds that do germinate rapidly form sensitive taproots. If these are damaged during transplanting, the plants will die. For this reason it is best to sow the seeds where you want the plants to grow.


Under the best conditions this still is not a plant for small or even medium-sized gardens. The palms grow into large clumps needing a lot of room. The best thing is therefore to protect them in their natural habitat. They regenerate well enough in the wild, and in suitable habitat grow in their millions. Gathering fruit and leaves and tapping them for wine, when done right, is sustainable on a large scale.