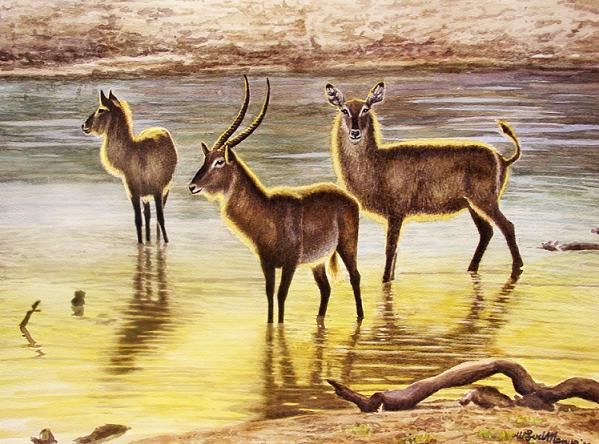 This time I bring you a group portrait – a waterbuck family at dawn. The one with the horns is the bull; the cow is to his right, and their kid on the left. Waterbucks' ridged, gently curving horns can reach 1m/40" in length. They’re among the largest antelopes in South Africa, the bulls reaching 136 cm/54" at the shoulder and a bodyweight of 300 kg/660 lbs. Their long, shaggy coats also make them seem quite bulky. But baby waterbucks are very fluffy and cuddly-looking!

Despite their name, waterbucks are not the most aquatic of antelopes. That distinction would go to the Lechwes (close relatives of waterbucks) and Sitatungas (not so closely related – closer to the spiral-horned antelopes like kudus and, in fact, domestic cattle) who spend most of their time in marshes and swamps. Waterbucks, however, live in savannah and woodland where they graze. But they will stay reasonably close to water features like rivers and lakes, where the vegetation, including the grasses, will be lusher. They will go to the water to drink, which they do more frequently than most antelopes, and they will also flee into the water to escape from predators like lions and hyenas. They are good swimmers and will venture into water where they’re fully submerged, just their heads sticking out. 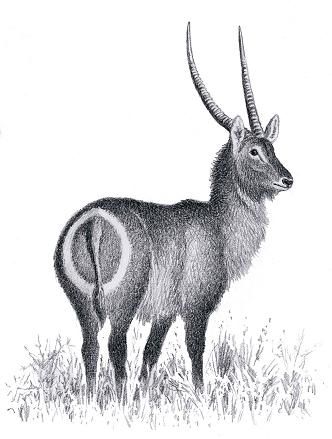 A common traditional tale is that Waterbuck meat is inedible, which makes them undesirable among both human hunters and predators. This has a grain of truth: the waterbuck’s shaggy fur is protected and waterproofed by a musky-smelling (and tasting) secretion – which might also play a role in scent marking and individual recognition. This substance is present in the fat just underneath the skin as well. If care is not taken while skinning a waterbuck carcass, this can end up tainting the meat. (Now if you know me, I don't like the idea of hunting and I'm a vegetarian, but I'm reporting it for the sake of completeness.) But the meat itself is quite edible and in fact there are peoples in Africa that regularly hunt waterbucks for their meat. Predators in the wild are not particularly finicky either, and will eat waterbucks if they can manage to catch and kill them.

Another feature of the (southern) waterbuck that makes for often-repeated tales is the white crescent it has around its buttocks! Here in South Africa there are many 'origin' tales of how animals came by their respective unique features. In the case of the waterbuck, the tale (which you'll realize is of quite recent origin compared to some other folk-tales) is that the waterbuck on Noah's Ark needed to go to the toilet but it had been freshly painted white (the toilet, not the waterbuck). The waterbuck ignored the 'wet paint' sign and sat down, and consequently emerged with the white ring around its butt, which in a fashion not really supported by Mendelian genetics was passed on to all its progeny.


Another tale is that the white ring provides a neat and easily visible target for a predator sneaking up on a waterbuck from behind. This is actually not far from the truth. The white ring is visually very striking and easily visible and in fact probably serves as a way for waterbucks to easily focus on each other. The round shape and the white-and-dark contrast is something that will not be present in anything else in the environment, and therefore any waterbuck glimpsing it through the grass and dense bush will immediately know, "ah! There’s another one of us". It is especially helpful for youngsters to keep in visual touch with their moms, and for fleeing animals to follow each other.


This white ring is present in the southern waterbuck populations, but the northern ones, called Defassa Waterbucks, have all-white buttocks instead of just a ring. This still has the same function, being highly visible. 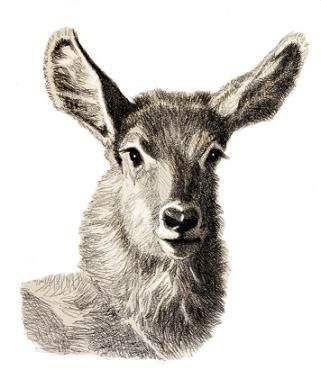 These large antelopes are not as abundant and as frequently seen as some others like Wildebeests. They occur in smaller groups, typically less than ten animals, but rarely in herds of 30 or more. These groups are mostly females and immature waterbucks. Males that are not yet in their prime form small bachelor herds. Adult males will stake out and defend territories, using their horns to fight their rivals, sometimes to the death. But because these fights are so dangerous they will first try and intimidate each other with posing displays. The 'frontal' display consists of the bull standing up with legs as straight as possible, lifting his head to show the white around his mouth and chin and between his eyes. In the 'lateral' display he will stand side-on to his challenger to show the thickness of his neck – and implied horn-wielding strength. He may emphasize the point by lowering and shaking his head. If a challenging bull is 'cowed' by this display he will lower his head and body to indicate that he feels humble and small.


Because of year-round food availability on the lush riverine margins, waterbucks can mate any time of the year, but it happens mostly in the winter. The territorial bull will regularly check the cows under him by smelling their rear quarters and urine. Cows in estrus will arch their backs and twist their tales aside. The bull will then come and rub them on their backs with his face and horns, and tap them between their hind legs with his foreleg, after which they’ll mate. After a gestation of nine months the mother gives birth to one or rarely two calves. She hides the calf in the reeds, grass or bushes while she goes out to feed each day, returning to nurse it. She will regularly lick the calf as thoroughly as possible to remove traces of scent from it, which might attract predators. She calls her calf to her by bleating or snorting. After three or four weeks the calf will start accompanying its mother. It weans at the age of around nine months. Cow calves will remain with their mothers for a long time but bull calves, on approaching maturity, are chased off by the territorial bulls. Bulls only reach the ability to establish and defend their own territories at the age of five or six years. Some will never be bound to territories but become 'satellite' males that roam in and out of the territories of others, usually surreptitiously. They might even be tolerated by the territorial bulls if they don't challenge them too much.

Waterbucks have the scientific name Kobus ellipsiprymnus. The genus name comes from 'Koba', an African name, and the species name means 'ellipsed-hindpart'. It is a member of the Reduncinae, a small subfamily of the antelopes. Waterbucks’ closest relatives are the Lechwes, Pukus and Kobs also belonging to the genus Kobus, and then the Reedbucks of the genus Redunca. The reedbucks are somewhat smaller, and less aquatic, the Mountain Reedbuck not being associated with water at all. Interestingly, this group is found as fossils in Europe and Asia but at present is confined to Africa.