We’ve got an Oddity treat for you: a picture and some words to ponder.

Shaw’s Androcles: Lions and Soldiers and Emperors, Oh My 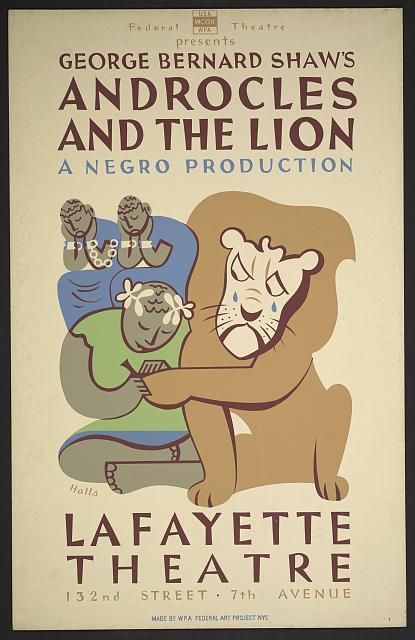 Back in the 1930s, the Federal Theatre Project presented a lot of plays as part of the WPA1. It was a way to help the US out of the Great Depression while doing some educating. Of course, it wasn’t popular with the sort of people who didn’t want other people educated. George Bernard Shaw understood this sort of thinking – in fact, that’s part of what Androcles and the Lion is about. It’s a political fable, this play, which may be one of the reasons why this all-black cast took it on. We wish we had a DVD.

During the First World War, Shaw had a fair amount to say in an afterword to Androcles   – about dissent, about empires (he didn’t like them), and about people who preached Christianity without practising it. We’d like to quote some of his remarks here at length. If we can’t have the DVD, at least we’ve got the text.

Therefore my martyrs are the martyrs of all time, and my persecutors the persecutors of all time. My Emperor, who has no sense of the value of common people's lives, and amuses himself with killing as carelessly as with sparing, is the sort of monster you can make of any silly-clever gentleman by idolizing him. We are still so easily imposed on by such idols that one of the leading pastors of the Free Churches in London denounced my play on the ground that my persecuting Emperor is a very fine fellow, and the persecuted Christians ridiculous. From which I conclude that a popular pulpit may be as perilous to a man's soul as an imperial throne...

the most striking aspect of the play at this moment is the terrible topicality given it by the [First World] war...They [the British clergy] have turned their churches into recruiting stations and their vestries into munitions workshops. But it has never occurred to them to take off their black coats and say quite simply, "I find in the hour of trial that the Sermon on the Mount is tosh, and that I am not a Christian. I apologize for all the unpatriotic nonsense I have been preaching all these years. Have the goodness to give me a revolver and a commission in a regiment which has for its chaplain a priest of the god Mars: my God." Not a bit of it. They have stuck to their livings and served Mars in the name of Christ, to the scandal of all religious mankind....They did not protest even when a body calling itself the Anti-German League (not having noticed, apparently, that it had been anticipated by the British Empire, the French Republic, and the Kingdoms of Italy, Japan, and Serbia) actually succeeded in closing a church at Forest Hill in which God was worshipped in the German language. One would have supposed that this grotesque outrage on the commonest decencies of religion would have provoked a remonstrance from even the worldliest bench of bishops. But no: apparently it seemed to the bishops as natural that the House of God should be looted when He allowed German to be spoken in it as that a baker's shop with a German name over the door should be pillaged. Their verdict was, in effect, "Serve God right, for creating the Germans!" ...

In short, a Christian martyr was thrown to the lions not because he was a Christian, but because he was a crank: that is, an unusual sort of person. And multitudes of people, quite as civilized and amiable as we, crowded to see the lions eat him just as they now crowd the lion-house in the Zoo at feeding-time, not because they really cared two-pence about Diana or Christ, or could have given you any intelligent or correct account of the things Diana and Christ stood against one another for, but simply because they wanted to see a curious and exciting spectacle....
– George Bernard Shaw, note to Androcles and the Lion.

Shaw intended his play to be read as a discussion of intolerance, the problems of cultural dissent, and the evils of going along with the status quo. He ends his commentary by noting with satisfaction that he had apparently been able to offend more than one brand of imperialist.

It was currently reported in the Berlin newspapers that when Androcles was first performed in Berlin, the Crown Prince rose and left the house, unable to endure the (I hope) very clear and fair exposition of autocratic Imperialism given by the Roman captain to his Christian prisoners. No English Imperialist was intelligent and earnest enough to do the same in London. If the report is correct, I confirm the logic of the Crown Prince, and am glad to find myself so well understood. But I can assure him that the Empire which served for my model when I wrote Androcles was, as he is now finding to his cost, much nearer my home than the German one.   – George Bernard Shaw, note to Androcles and the Lion.

Maybe there is something in those old plays after all?