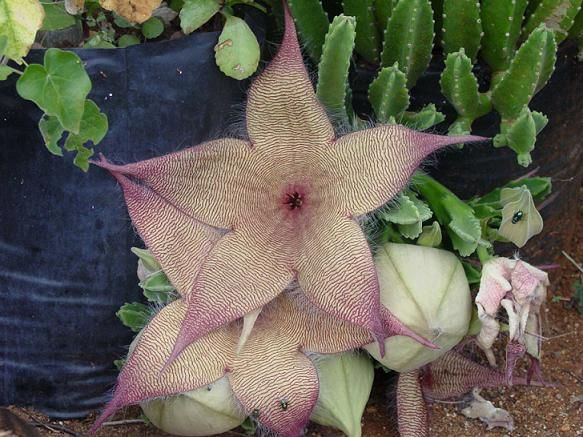 After a few pretty flowers, time again for something truly weird, the Giant Carrion Flower, Stapelia gigantea! I have already written an entry on this species which you can see here. So read there if you want to know all the details! Here I bring for you a new painting and a bigger photo than the one in the entry. On my painting you can clearly see the finger-like, green, succulent stems, and the flower bud with its corkscrew-twisted tip. I have for you a photo as well of the seed pods, actually follicles, that are in pairs and look like the horns of an antelope. These split open at a single seam to release the fluff-tipped seeds. 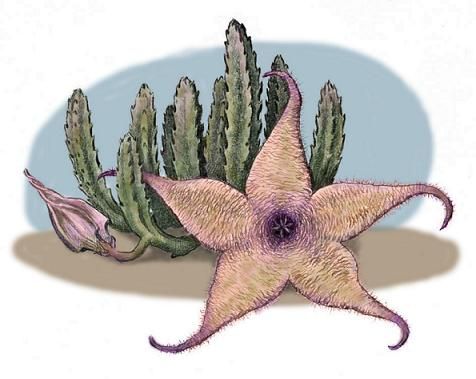 There has been recent news of another smelly flower, the Titum Arum or Corpse Flower, Amorphophallus titanum, flowering in the Washington, D.C. Botanical Garden. Now this is a much larger 'flower' but actually what you see there is not a single flower but a complex flower structure, with a spathe and a spadix on which the small individual flowers are found. The giant carrion flower of Africa is a much smaller plant but its flowers are single and very large, reaching 40 cm/16" in diameter. And this on a plant that itself rarely grows over 20 cm/8" tall! The titan arum is only very distantly related to the giant carrion flower, being a monocot, while carrion flowers are dicots. At any rate I found it interesting that the visitors to the botanical garden complained, not of the flower being smelly, but of it not being smelly enough! A lot of the hype around it after all was about it being so nauseatingly smelly, after all, so they were disappointed in it not being as bad as they had imagined. In the case of the giant carrion flower I guess it’s the same. I've been growing them in my garden for many years now, and the smell has not been an issue. You will smell it faintly from a distance, but only if you shove your nose into the flower will it really be bad. And not so much that you'll regret the experience for the rest of your life! It’s just a moderately-offensive sort of smell. I have some growing right outside the front door. I even once kept a number of specimens of a related species on the windowsill in my bedroom. I guess you could even use these plants in your house to disguise it if you tend to have, erm, issues with your digestion: "it wasn't me, honest, it's these flowers!" 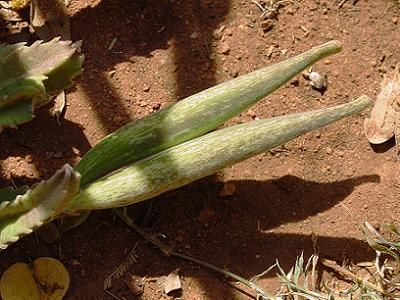 But really, these flowers are worth growing. The plants themselves are interesting with their small succulent stems. They're easy to fit into a small garden. The flowers too are quite fascinating. When I first showed carrion flowers to my nephew Christiaan he insisted that they were not flowers, but stars! They have a very starfish-like appearance … almost the entire family seems somewhat animal-like, rather than plant-like. These plants are good for experimenting, and can offer easy lessons in propagating succulents by way of seeds, cuttings and grafting. Carrion flower stems are somewhat prone to rotting, and this can also teach the succulent enthusiast to watch out for overwatering. But they are also easily rescued – the rotten bits can be cut off, the remaining pieces left to dry for a week or so and then re-planted. All in all I really want to encourage people to try out these weird plants!