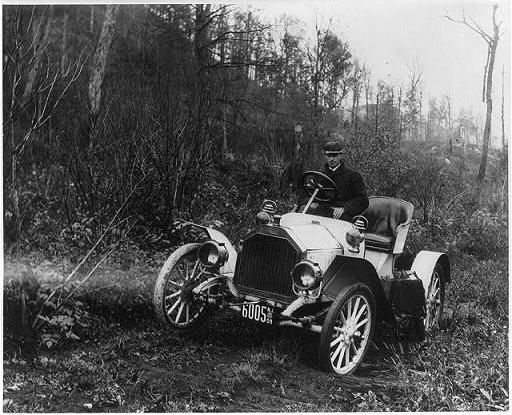 Ah, the joys of the open road. The open corduroy road.

What, I hear you ask, is a corduroy road? Does it go with that retro Madras shirt I have in my closet?

My friends, a corduroy road was Colonial America's solution to how to keep the wagons from sinking in the mud. Basically, you cut logs in half and embedded them in the ground. Result? A bumpy ride. Sort of like driving over corduroy, the 18th-century wonder fabric. Corduroy roads can be found under many paved-over roads in former colonial areas: this Researcher's English teacher once found an ancient shilling lodged in one during renovations in our neighbourhood outside Pittsburgh. History tended to come alive when you went to school on Mt Royal Boulevard.

Horses managed. Wagons managed. Drivers got shaken up, but managed. Then came the automobile.

According to the Library of Congress, this photo was taken in upstate New York in 1909. It is labelled 'On the road to Oregon.' We found this suspicious: At that rate, Mr Derby Hat is not going to get to the West Coast. Ah, Oregon. Oregon, New York. According to Wikipedia, 'New Oregon, New York is a small, unincorporated hamlet in the town of North Collins in southern Erie County, New York, USA.' So now you know.

We hope that guy knew how to change a flat.