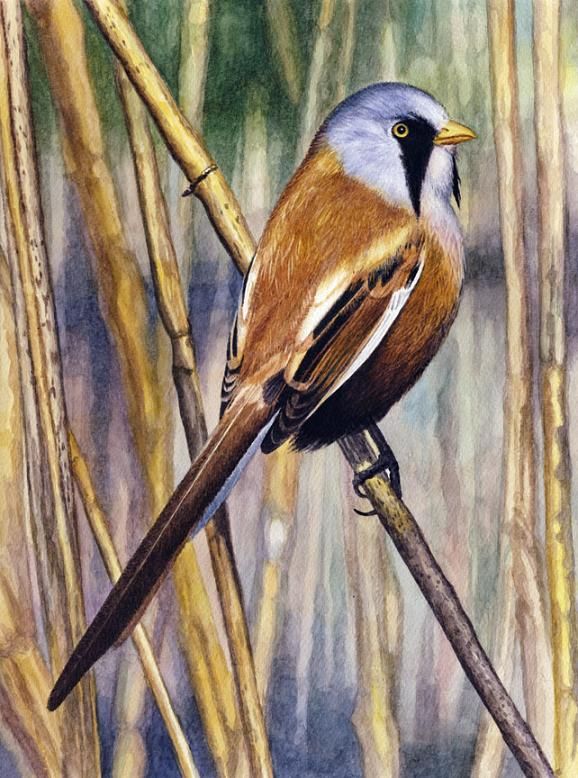 The Bearded Tit, Panurus biarmicus, is a bit of a change for my column, since it is not a South African species. I used a photo taken by a friend of mine as reference; you can see the original here.


Neither a Tit Nor Bearded

This enigmatic bird occurs in Europe and Northern Asia. It is not really a tit, and so is yet another member of the growing list of species featured in this column and in the Phyto-Philes that have inappropriate names. Its alternative name of Bearded Reedling is therefore more suitable. It is not clear just what kind of bird it is – it was considered to be a kind of babbler, then moved to the parrotbill family – and sometimes called the bearded parrotbill – although its bill is not particularly parrot-like. Currently it is thought not to be closely related to any other kind of songbird. The 'bearded' part is also inaccurate because the black feathers at the side of its bill and face should be termed moustaches although it consists of feathers and not hair. (In the Netherlands this bird is known as a 'Baardmannetjie' or 'little bearded man' which is what we in South Africa call an entirely unrelated bird, the Scalyfeathered Finch, Sporopipes squamifrons.) But the 'reedling' part is accurate since it is most commonly found around and in reed beds.


The male, if seen at all well, is immediately recognizable by his black, drooping moustaches. The female can be recognized by her general similarity in shape with the male: long tail, compact body, stubby orange-yellow bill, and general similar coloration. This is a small bird, reaching 18 cm/7" in length, most of which is the tail. It has short wings and typically only flies short distances among the dense reeds, fanning and twisting its tail and uttering a 'ping-ping' call. Flocks of reedlings will also call softly while feeding to help them stay in contact with each other. These calls may often betray the presence of these birds in dense reed beds where it is difficult or impossible to see them.

In spring and summer bearded reedlings feed mainly on insects. The rivers and ponds that provide their reedy habitat sustain a great diversity of insects. Mayflies live most of their lives in the aquatic nymph form, but emerge in masses to breed in spring. Then the bearded reedlings will try and catch and eat them – as will many other bird species. This is no great loss to the adult mayflies, since they die after a day or two at most anyways, and large numbers of them do get to breed before getting caught. There are many other insects and invertebrates around the streams and the reed beds fringing them as well: aphids, flies an, caterpillars, small snails and more, providing ample nutrition. But come winter the insects die, and then the reedling changes its diet – and it also changes its digestive system! Now the reedling feeds mostly on seeds, especially the small seeds of the reeds themselves. Its entrails lengthen so that the hard seeds passing through get more time in which to digest, and its stomach wall becomes thicker and firmer.

This is a fluffy little bird, and when the time to breed comes it makes itself even fluffier! The male's display involves him puffing out his moustaches and raising the long, loose feathers on his crown into a crest. If the female finds him fluffy enough they will mate. They then build the nest together. It is a cup woven from strips of reed and grass and supported between the upright stems of the reeds, using cobwebs to fasten it tightly. The male lines it with downy reed flowers as well as feathers. The female lays between four and eight eggs, and incubates them for 11 to 12 days. The chicks are naked, blind and helpless at birth, but fledge in 12 to 13 days.

Bearded reedlings have a very wide range of distribution, encompassing most of Europe and Asia, but occur only in specific patches over that range, where there is extensive suitable habitat. The species is one of the most sought after by birdwatchers in Britain, where perhaps only about 500 pairs are resident, half of them in the reed beds at the mouth of the river Tay in Scotland. Globally these birds are not endangered, but they go through significant fluctuations and are very vulnerable to particularly long and cold winters, that tend to occur a lot in the more northern parts of their range and in which very large numbers may die. In response to harsh weather some flocks might move to more pleasant climes. This is not true migration as it is not planned and doesn't happen regularly on a set route.


Finally let me just say that entirely too little about this bird is known. I could find only the barest facts in my online searches for info, and this is a species that occurs in Britain and Europe, where so many scientists and birdwatchers live! This is just to demonstrate again just how much more study so many of the living things sharing this planet with us deserve.