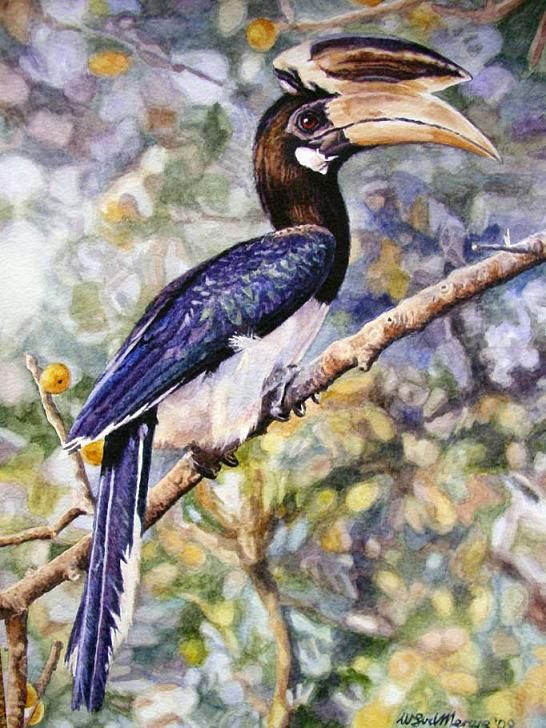 Time for a change. Today’s article is about a species of bird that is not found in South Africa, or indeed Africa. This is a Malabar (or Indian) Pied Hornbill, Anthracoceros coronatus. Although it is not found here, it is related to the many hornbill species that we do have, and is somewhat similar to the Trumpeter Hornbill, Bycanistes bucinator, which I hope to feature some time. This pied hornbill is remarkable for the huge casque it has on top of its bill. This casque is what gives the hornbill family its name. In this species it is hollow and thus not as heavy as it looks; it probably plays a role in amplifying the bird’s calls. Its scientific name means ‘crowned Anthracite-horn’, anthracite being a kind of coal, referring to the black colour of the casque.


This hornbill is found in India and the island of Sri Lanka. It inhabits deciduous forest as well as mixed forests and the more open types of evergreen forest. Sometimes it will enter bamboo forests as well as timber and fruit tree plantations. This species is widespread but declining and warrants conservation efforts.


In appearance this is not a very colourful hornbill, its common name referring to its black-and-white coloration. Its black feathers do have a bit of a greenish-blue gloss to them. But it is a very impressive looking bird with its huge bill and casque. This is a fairly large hornbill, reaching 65 cm/2’2” in overall length. Females also have casques, but they are slightly smaller with a smaller black patch, and also the naked skin around the eye is whitish instead of bluish black as in the male. When this species flies you can see that the tips and trailing edges of its wings are white.


Like other hornbills this is a fruit-eater. It likes figs, and also the fruits of mahogany, Syzygium, Strychnos (which are poisonous to humans), Grewia and many others. The large fruits of Strychnos have hard shells which these birds break or hammer open with their powerful bills. As large as they are, they sometimes hover briefly in front of fruits that are otherwise inaccessible to pluck them off, or sometimes they snatch fruit while flying at them. They have been seen dangling by their bills while trying to pry off too tightly attached fruits! Although they prefer fruit, they will eat the leaves of some trees as well and also insects such as termites, beetles, grasshoppers and a variety of larvae. They sometimes eat small lizards as well. They catch snails on the ground and will hunt flying insects in the air. They live in flocks of from four to sixty birds, making use of abundantly fruiting trees like figs. They roost in dense vegetation at night, and set out for their feeding areas before sunrise. During the hottest times of the day they rest in dense shade, gaping to help them shed heat. At the roost sites they preen and sometimes feed one another, and play around with their bills. Their calls are loud cackles, squeals, whistles and clucks.


This species shares with other hornbills the remarkable habit of ‘imprisoning’ the females while they breed. A pair will first find a large enough hole in a tree, raning from 3.5 m (about 12’) to 15 m (50’) above the ground. The male will bring the female mud and fruit pulp and she will use this along with her own feces to make a kind of cement with which she walls up the entrance, only leaving a small slit through which she can poke the tip of her bill. From now she is utterly dependent on the male for bringing her food. While inside she will moult her flight feathers and grow new ones. She will lay typically two eggs, but up to four. These hatch after about a month; the male keeps bringing food for her and her chicks. When they become too big for her to fit in the hole along with them, she will break out and then reseal the hole and help the male to feed them until they, too, are ready to emerge. This happens after about 5-6 weeks. Then the chicks also break out and join the flock.