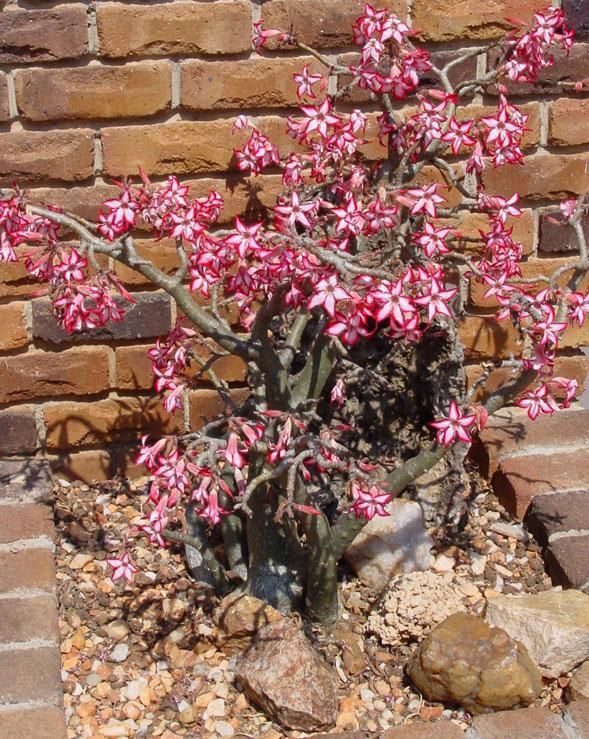 Today I show you a true treasure of South Africa, the Impala Lily, Adenium multiflorum. If you read my columns you won't be surprised when I tell you that its name is quite inappropriate; this is a theme that tends to reoccur in my writings! This is not even remotely a lily. Lilies belong to the other branch of the flowering plants, the Monocotyledons, plants having a single 'seed' leaf. This means that the germinating seed sprouts a single first leaf to get the little plant started. Other monocots include grasses, palm trees, arum lilies and orchids. Many monocot families such as lilies, irises, amaryllids and more, have spectacular flowers. Monocots tend to be small, only palms and a few others reaching tree proportions. They don't have real wood and rarely branch, a great many of them growing annual leaves from underground bulbs. Monocots typically have leaves with parallel veins. The Impala Lily belongs to the other branch of the flowering plants, the Dicotyledons, which typically have two seed leaves. If you've ever seen a bean or pea germinate you'll know the principle; the pea splits in two, each half flattening out to form the baby plant's first 'leaves' while between them a new shoot develops which bears the true leaves. Dicots are spectacularly diverse, ranging from tiny herbs to giant forest trees. Many species are woody – many are not; they tend to branch more than monocots, and most of them have veins in their leaves forming branched networks rather than parallel lines. Many dicots also have beautiful flowers.


So, impala lilies are only very distantly related to true lilies. They are members of the Apocynaceae often called the Oleander Family. Plant relationships are a thorny thing; most laypeople don't have anywhere near enough of a reference frame for understanding them. We tend to know only a few species, either common food plants, or showy and easy garden plants. So it is actually a great disservice to call this family after the Oleander; some gardeners may know that plant, but it is by far not representative of the family as a whole. Indeed no single species in it can be called representative. The Apocynaceae is wonderfully diverse, mostly tropical, and including herbs, shrubs, climbers, trees, and succulents, of which the Impala Lily is a prime example. A feature of the family by which many members can be recognized is the fruit. They typically are borne in pairs, connected at the centre, and each fruit opens along a single seam to release the seeds. Fruit of this kind are called follicles. Furthermore the seeds of many species have long, fluffy white 'hairs' attached to allow them to be blown far away by the wind, helping them disperse. There are fruit and seeds in many species that differ from this, but they can be identified in other ways, such as the typical white, milky sap or latex that exudes from the leaves and stems – but that, too, is not universal. The typical paired follicle fruit, fluffy seeds and white sap constitute the 'default' position, from which a few species changed through adaptation and specialization. People tend not to understand how incredibly adaptable plants are; two species, one a tiny herb and one a big tree, could in fact be closely related, having recently diversified from a common ancestor by adapting to different habitats and lifestyles. Today the best way to determine the relationships of plants is by studying their genes; previously the best way was by detailed analysis of their flowers. The latter is still the foundation of the present classification of plants; only in some cases do genes reveal new and surprising information on relationships. 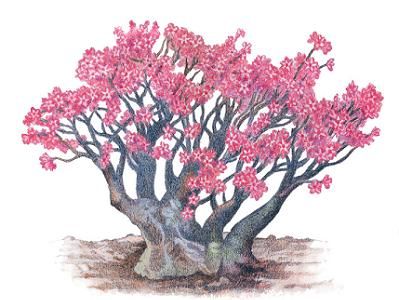 The Impala Lily belongs to a section of the Apocynacae comprising of succulents. These mostly are plants with thick stems. There are two groups, the one the genus Pachypodium which contains the Halfmens which is primarily a Madagascan group of large, tree-like plants; the other group is the genus Adenium which contains this and a few other similar species (sometimes considered subspecies) that range from southern to eastern Africa and also Arabia and the island of Socotra. Pachypodiums are typically more tree-like and thorny, while Adeniums are shrub-like and lack thorns. Also, while Pachypodium seeds have a single tuft of hair, Adenium seeds have a tuft of hair on both ends of the cylindrical seed. Adenium may not be that closely related to Pachypodium, the two groups perhaps having evolved succulence separately.


This particular Adenium grows in the hot, dry, eastern and northern parts of South Africa and other countries further to the North. Indeed it frequently occurs in the same regions as the graceful antelope, the Impala, after which it is named. It sometimes grows in rocky places, at other times in sandy soil in open woodland. In protected places it can reach a height of 3 m/10ft but where game can access it they usually browse it down so that it rarely exceeds 70 cm/2'4”. This is despite its watery sap being toxic. But it has a thick subterranean tuber, called a caudex, from which it can resprout after damage. In healthy, old plants the caudex as well as the lower stem and branches can become wonderfully thick, and the plants develop individual shapes.


Want to know more about Impala Lilies, and see more pictures? Read Part Two of this edition of Phyto-Philes.