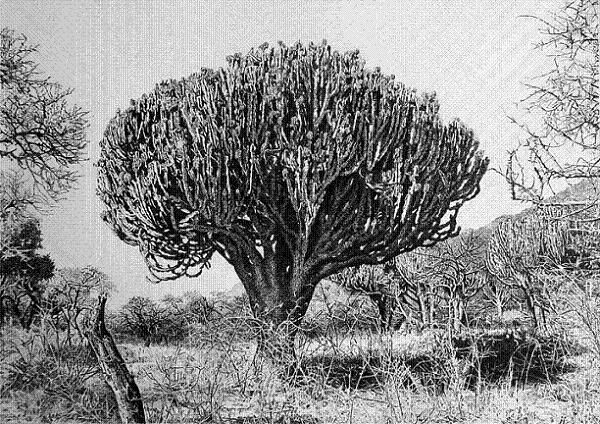 Today I feature the Tree Euphorbia, Euphorbia ingens, also known as a Candelabra Tree. In Afrikaans it is known as a Naboom (near-tree). This strange tree grows in abundance around these parts. My sketch is of one I saw in the Potgietersrus Game Breeding Centre; the photograph is of one growing at the precise spot where the highway northward from Polokwane crosses the Tropic of Capricorn. There is a picturesque group of small rocky hills around which grow many magnificent specimens of the species. The species has also given its name to the town of Naboomspruit (near-tree stream), which unfortunately has been given a new name recently.


This is in fact a giant succulent. Young ones can be confused with cacti, but it is actually not closely related to them at all. But like cacti it has no leaves; instead, the tips of the branches are expanded into four or five rows of flat wings, which are filled with chlorophyll and used instead of leaves to photosynthesize. These tips are also quite soft, except for the short, hard thorns on their margins; the lower branches are harder and fibrous, the trunk with a rather soft, fibrous wood. Its sap is a very toxic white latex. If this gets in your eyes they will burn with an incredibly intense pain. I know only too well; this has happened to me! The latex is also said to burn and blister the skin, but in my experience this is not so. Although I only got small amounts of latex on my fingers . . . if large amounts land on sensitive skin areas it may indeed be very irritating.


There is in fact a funny scene using this in the movie 'The Gods Must Be Crazy'. In this, a bad guy (one of a group of 'terrorists' that took a bunch of children hostage) is shooting at the good guy; he is behind cover and the good guy can't hit him. Then he notices that the bad guy is hiding right below one of these trees. Instead of shooting at the bad guy, he shoots at a branch directly above the bad guy's head; the latex drips all over the bad guy who at first doesn't realize what trouble he's in; then he begins itching and futilely scratching himself. . . soon it's so bad he completely stops paying attention to the situation and the good guy proceeds to effortlessly take him captive. An example of how nature-savvy might defuse a deadly confrontation! 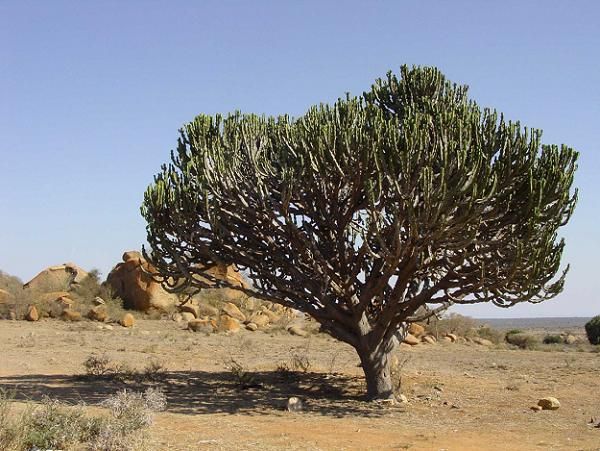 This is one of the largest Euphorbia species. It grows to a height and crown width of 15 m/50 ft. A few others also reach tree proportions, and some grow higher (up to 18 m/60 ft in the case of Euphorbia triangularis, the River Euphorbia) but this one has the most massive crown and trunk and is generally the most imposing species. The genus Euphorbia is incredibly diverse and includes more than 2 000 known species; more are still being discovered and described. Most of them are succulent, and they range from tiny up to this size. Growing in the very same regions as this one is one of the smallest, Euphorbia trichadenia, the above-ground parts of which rarely grow more than an inch tall. This one has a much larger subterranean tuber from which it grows, though. Eupborbias include such tuberous forms, small succulents with an incredible variety of shapes, shrub-like species with leaves, and then tall candelabra-shaped or treelike species. South Africa alone has more than three hundred species, while many others are found throughout Africa and Madagascar. The genus ranges to Europe, America and Asia as well although many of those species are quite dissimilar to this and other African ones. I hope to feature more Euphorbia species here; I have quite an extensive collection of specimens. I've also photographed a collection at the University of Limpopo.


The toxic latex of this species is actually put to good use. It and some of its relatives are planted around cattle kraals as living hedges. Predators trying to push through will get the toxic sap on them or even in their eyes; they will quickly learn the lesson. The latex is also used as a fish poison. A bundle of grass is soaked in it and then thrown in a pool with a stone tied to it. The fish in the pool become paralyzed and rise to the surface where they are easy to collect. At this concentration the poison is harmless to humans and the fish can safely be eaten. Not so harmless are some of the traditional medicines made with the latex. These are used as purgatives, as a remedy for alcoholism and even against cancer, but deaths have resulted from accidental overdoses.


Although this tree's wood isn't very woody, the fibrous material does have uses. If a large fire is made at the base of a tree the heat will cause the sap to coagulate, and then sections of the trunk and branches can be cut without being bothered by the latex. These can be used for making simple doors or boats, the wood being quite light.


An interesting effect of this and other large euphorbias in an environment has to do with honey. These trees flower prolifically. The individual flowers are tiny and highly simplified, but occur in larger structures called cyathia. The entire cyathium is yellow and attracts bees. But euphorbia nectar has the same burning quality as the sap! So when the bees make honey with this nectar the result is a honey that causes a severe burning of the mouth and throat. It is called 'noors honey' after an Eastern Cape species. The burning is only made worse by drinking water! 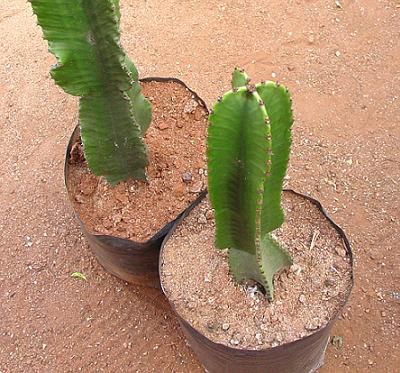 With its combination of useful and dangerous attributes this tree has for centuries been regarded highly by local peoples. Dingaan, the Zulu King who succeeded Shaka and who had Boer leader Piet Retief and his party murdered, had his throne built under a huge specimen. This succulent is very easy to grow. Any branch or section of a branch can be planted and will root and grow into a tree. My photo shows recently-planted branch sections; in fact that was some years ago and these have grown into good-sized trees by now. For best results the branch sections must be left to dry out for a month or few and then planted in sandy, well-draining soil. Of course with this species one must always keep safety in mind. It should not be planted close to walking areas especially where there are children. In fact it should only be planted in very large gardens where it has room to grow nice and huge, and where the climate is suitable. A good idea would be to plant dense, low, thorny bushes around its base, to keep people away but to still allow them to view it from a distance. It loves warm, sunny summers with moderate rainfall and dry, not-too-cold winters. This species is best planted in groups on game farms and nature reserves. Apart from the nectar, which despite its burning nourishes bees and many other insects, the trees have considerable ecological value. Baboons and monkeys eat the red fruit; many birds nest amidst the shelter of the thorny crown – eagles and other large birds will build the nest on top of the dense crown; some birds even excavate nests in the old and dry portions of the trunks and branches. And last but not least a big candelabra tree or even a large grove of them is sure to be noticed and commented on by tourists!