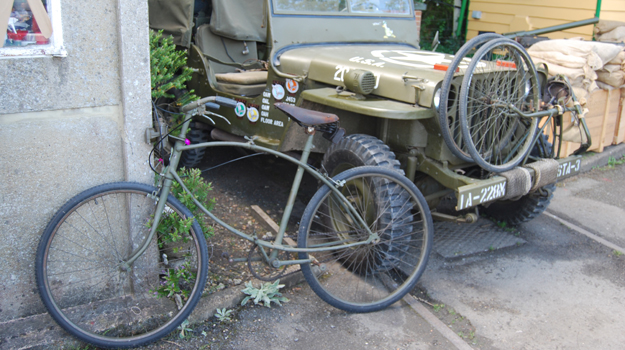 During the Second World War Britain had a secret weapon - the BSA Paratrooper's Folding Bicycle.

One of the major problems faced by paratroopers on raids into enemy territory was how to get to the intended target quickly and silently, without being spotted. When dropped from aircraft the unguided parachutes drifted. Paratroopers often ended up dispersed over a wide area, with valuable time lost in regrouping. Paratroopers would also often be forced to be dropped a distance from the intended target to minimise the risk of being spotted. A lightweight means of allowing paratroopers to regroup quickly, reach their target fast and quietly, without being detected, was needed, and the paratrooper's folding bicycle allowed this to happen.

An additional advantage of the bicycle as a means of transport was that it did not require fuel to operate. Petrol stations and fuel depots were often among the first targets destroyed in war zones.

BSA, the Birmingham Small Arms company, had produced bicycles for the British Army during the Great War, including a folding variety which worked by means of a single lever hinge with a thick tube running down from the top to the bottom frame, approximately halfway between the saddle and handlebar. This experience made them the perfect choice to manufacture the paratrooper's folding bicycle.

The Paratroopers' Folding Bicycle was a completely different design to its earlier counterpart, to allow it to be more suitable for the unique needs for a paratrooper. It was lighter, which was of benefit when taken in large numbers onboard gliders, and had a completely different folding mechanism. Instead of one central lever hinge, the main fold was achieved through two wingnuts, one on the top and one on the bottom of the bike's frame, that were hinged to allow the frame to fold back on itself. The top frame itself was unusual in that unlike most diamond-frame bikes which have one thick frame on all four tubes, it had smaller twin cylindrical top tubes.

In addition there was a wingnut that, when unscrewed, allowed the handlebar to fold out of the way. The bike also was equipped with simple cylindrical spindle pedals, rather than the flat square pedals that cyclists' feet usually rest on. These could be pushed through the pedal crank shaft so that, when folded, the pedals did not get in the way.

Unlike modern folding bicycles, the paratroopers' folding bicycle had a full size diamond frame and wheels. The bike weighed 21lbs, less than the original design specification, and it is believed over 60,000 were made, half the number of bicycles made during the Second World War. The BSA logo of three rifles was prominently displayed.

The bicycle was named the Paratroopers' Folding Bicycle and also officially known as the Airborne Bicycle. Although it is sometimes called the 'Parabike', this nickname is incorrect and was first used to later market children's versions of the bicycle.

The Bicycle In Combat

Paratroopers would drop from aircraft holding onto the bicycles in their hands. The bicycles were never strapped to the paratroopers' backs, as popularly depicted, as obviously this is where the parachute was kept.

The major drawback of the folding bicycle was that it had to be abandoned in a conflict situation. It was impossible to ride the bicycle and fire a rifle at the same time. The bicycle also was not fast enough to allow for a quick escape from enemy fire, and offered no defensive protection. For these reasons the bike was designed to be disposable.

The bicycle was used in a few operations by both British and Canadian troops from 1942, including Norwary in 1942, Sicily in 1943, D-Day, during the second wave of the Normandy invasion, and Arnhem in 1944.

By D-Day, however, lighter motor vehicles such as jeeps had been introduced that could be carried in gliders, and operations such as PLUTO1 ensured that fuel was available to keep these vehicles running. With means of transport no longer needing to be disposable, the reliability placed on the humble bicycle was reduced. The bicycles were still used, however once disposed of were quickly acquired by those living locally to where the bikes were abandoned. They became a common sight in parts of rural France and the Netherlands after the war.

The Bruneval Raid, known as Operation Biting, was a raid against a German radar installation at Bruneval, France, on 27 February, 1942. Scientists believed that analysis of the equipment at the German radar station could help prevent the loss of British aircraft, and so a raid to attack and capture the key components of the dish was planned. As the area had heavy coastal defences, only an airborne assault landing far enough outside Bruneval to avoid raising suspicion, followed by evacuation by boat would succeed.

On 27 February airborne troops of 2nd Parachute Battalion, led by Major John Frost, parachuted a few miles from the radar station. They used their folding bicycles to quickly get to their target, which they successfully raided, dismantled and even kidnapped one of the scientists involved. Using the bicycles they then retreated to the evacuation point, where after a brief battle with the Germans defending the coast, they were picked up and returned to Britain.

Even before the Second World War had ended, BSA began advertising in the Cyclist's Touring Club Gazette in August 1944 that they planned to release a children's version of this bicycle. This went on sale in November 1945. This, and surplus 'adult' versions of the folding bicycle were the first bicycles BSA sold to the British public after the war ended, and were advertised with the words,

'The BSA 'Junior Parabike', a novel design that the dealers are distributing in time for Christmas. Its appearance is based on the famous BSA model used by British parachute troops.'

As well as being smaller, these bicycles were manufactured without the ability to fold and with proper pedals. These bikes were sold between 1945-1953 and a few were exported. They included mud guards, a rear pannier rack and bike stand and came in boys' or girls' versions. In 1953 BSA separated its bicycle and motorcycle divisions, selling the bicycle division to Raleigh in 1957.

Imitators – the sincerest form of flattery

Many of the surplus BSA folding bicycles were sold to Denmark. These proved very popular due to their simple but effective design, so much so in the early 1950s a Danish company manufactured approximately 500 of their own version of the BSA bicycles, calling them 'Parabikes'. Differences include a single back pedal brake rather than the original two brakes and as they were intended for long-term use rather than being disposable, were built to a higher quality as they had a longer life-span in mind.

This iconic design lives on today, 70 years after its introduction. In June 2011 a British bicycle manufacturer released a bicycle based on this design. Pashley, who have been manufacturing bicycles in Britain since 1926, have used this design to manufacture a model named the 'Parabike'. This is based on the classic BSA Airborne Bicycle, but like the Junior Parabike it is not foldable and has modern features such as 5-speed hub gears and fully enclosed drum brakes.

1Piple Line Under The Ocean.