Bastet, Sekhmet, please take your daughter Glory gently by the scruff of the neck and give her what humanity could not, or would not, or simply did not.

Glory had known very little if any human kindness before her rescuers brought her to the shelter at which I volunteer. The tabby was shaggy and terrified when I first met her. Glory shrank away when I offered her my hand. She never hissed, scratched or bit; she just huddled in the farthest corner of her cage.

All cats start out in quarantine until they have had their shots and have been spayed or neutered. They then go into the 'kitten kaboodle' or the cat room, depending on their age. Glory joined three cats in a large, walk-in cage in the cat room. She immediately took up residence in a covered cat bed that permitted her to hide almost completely.

Each time I visited, I stuck my hand in Glory's hidey-hole and petted her as much as she'd permit. Eventually she pressed the side of her head into my fingers. The day finally came when she rolled over onto her back, her round head trustingly cradled in my hand. 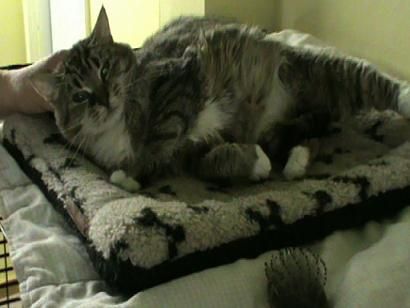 Space is always at a premium during the spring, and cats that don't fight with other cats are released from their cages and allowed to roam free in the cat room. Since Glory got along well with other cats, she became a “free-range cat”.

Theoretically, a free-range cat has an adoption advantage. A particularly friendly cat can saunter up to an adoptive family and wow them before they ever reach the cages. Glory wasn't particularly friendly. Once she was free from her shared cage, she stayed out of arm's reach and, to the greatest degree possible, out of sight. We hoped to find her a position as a barn cat.

For the remainder of the spring, she shied away from everyone, including me. Nonetheless Glory watched me closely as I groomed the other cats. Perhaps she didn't believe a brush and comb should be the cause of all that purring. Each week she sidled a little closer. Eventually she let me rub her ears again.

Over the summer she gradually became quite cuddly. I was overjoyed when she crawled into my arms. She began to accept petting not just from staff and volunteers but also from the shelter's visitors. We began to entertain hopes of finding her a loving home. 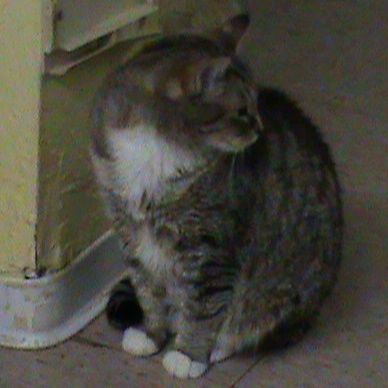 Those hopes began to fade in the face of a string of health problems beginning in late fall. The vet treated her for a urinary tract infection when blood showed up in her urine. Almost as soon as she finished one course of medication, she began another.

I rarely know which will be the last time I'll see a particular kitty. The last time I saw Glory, she was in an upper cage in the infirmary. She had come back from her latest trip to the vet and had already been rescheduled for another. I stood on tip-toe and rubbed her ears until my calves burned. She was too ill to roll over onto her back, but she laid on her side, placed her head in the palm of my hand, and did her best to purr.

Bastet, Sekhmet, Glory was a good cat. She deserved better than she got. She is in your paws now.