This year, we made an impassioned plea for people to tell us what they celebrated, and how they celebrated, somewhere outside the temperate zone of the Northern Hemisphere. The response has been gratifying. Willem tells us about Christmas in his part of the world – and, in case you're wondering, the picture is of course Willem's own inimitable art. 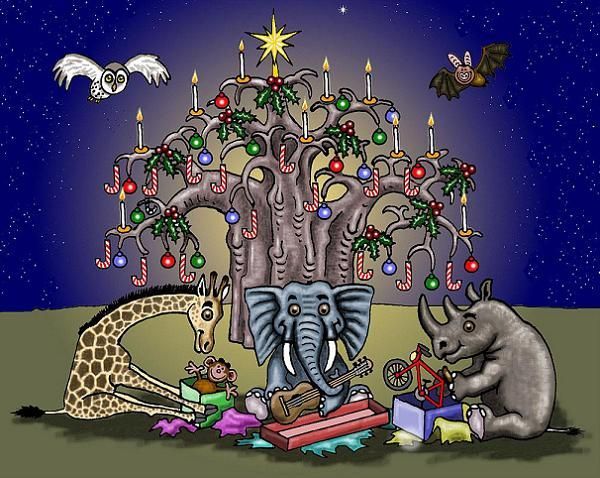 In South Africa, Christmas hasn't been as heavily commercialized as it seems to be in America. Indeed, it is becoming more commercialized, but generally, we celebrate it as a religious holiday. The focus is not so heavily on giving gifts and on partying, but more a celebration of Christ's birth.

Christmas has always been a special occasion for me. Some of my earliest drawings and paintings are of Santa Claus! Over here, the Afrikaans name for him is Kersvader, which means Father Christmas. An alternative, but less frequently used name, is Sinterklaas – this is the same as Santa Claus. Here in South Africa, of course, there is no snow, and no reindeer. And generally we don't see many or even any 'Santa Claus' impersonators (if one could call them that!) or even store-Santas. But one of my earliest memories is of us being in a holiday resort, at Christmastime, and there was a 'Kersvader' that came and gave gifts for the kids there. I must have been three or four years old, and I was quite impressed! I got a little Lego set of an airplane. I loved Legos as a child, so this was special for me.

From then, we had a little game in the family, where I would ask Santa what I would like in a letter. Of course my parents read the letter to get an idea of what I would like. I did believe for a while that 'Kersvader' himself read my letters. It was not like the typical American idea of Santa being at the North Pole, reading the letters of all the kids, and then bringing presents in a flying sleigh and then coming down the chimney … that mythology did not quite make it into our culture. I did not know how he came or how he got the presents to us, and anyways I soon figured out it was my parents, and I usually asked for things appropriate that I think they could afford. Mostly my Christmas presents were Lego sets, and later books. One of the nicest Christmas presents my parents ever gave me, was a little book called 'Prehistoric Animals and Plants', which was illustrated by the wonderful Czech artist Zdenek Burian, when I was eight or nine. The book was very influential on me, spurring my interest in prehistoric life AND inspiring me artistically.

When my sister and I became older we made a point of buying presents for our parents as well. These were usually books or music or nice things to eat. In all three, we quite knew each other's tastes!

The way we did it was to give the gifts at around midnight, when 'officially' the day starts. Then we would spend a while appreciating our gifts and thanking each other, and then to bed. The next day we would get up early because there would be a church service. After that we would come home and spend the day in a relaxed way.

In South Africa, the religious significance of Christmas is generally emphasized. When my sister and I were in school both of us took part in Christmas plays. Not at the same time, but once, I was one of the angels in the choir, and once my sister played the role of Mary!

Sometimes there were Christmas singing services in the church. We have a few Christmas carols in Afrikaans … translations or alternatives to the English ones, or sometimes translated from Dutch or German. 'Silent Night', or in the original German, 'Stille Nacht', for instance, becomes 'Stille Nag' in Afrikaans (meaning exactly the same thing). But we don't have 'caroling' … we sing in church, basically.

Also the Christmas tree is not very traditional. We only once had a Christmas tree, it was a small thing of sparkly tinsel, with little lights. I thought it was quite beautiful (I was probably eight or nine at the time) but we didn't use it again. The traditional Christmas trees don't grow here in South Africa. These days some people use a small living potted tree … a very good one would be an Outeniqua Yellowwood (Afrocarpus falcatus). This tree doesn't have the typical pyramid-shape (none of our native trees do) but it does have a nice, dense, evergreen crown. Another option is to use an artificial Baobab Tree (made of cane), and hang ornaments and presents from its stout branches. Local craftspeople sell these Baobab trees all over the country (at least my part of it) at the side of the road.

Also, advent calendars are not really popular, but again, on ONE occasion we got one, and it was great fun for us to reveal each day's picture and to wait patiently for the next day to see the next one, and so forth!

We didn't really celebrate Christmas with our other relatives … since when we left Pretoria (I was eight) we were very far away from the rest of the extended family, so it was basically just us … my parents, my sister and I. But we did occasionally celebrate with very good friends, going for meals at a nice eating place and then chatting for most of the day.

So, Christmas down here is basically a laid-back affair. Many of us Afrikaners celebrate it in a similar fashion. There are occasional spectacles ... there are sometimes displays of colourful lights making pictures in the central area of our town, and I know at least a few other South African towns do go to some trouble with such embellishments around the holiday time. But once again it is not an intense money-materialism-and-consumption-worshiping festival as it would seem to be the case in America ... but then, I only ever see an American Christmas in the movies, which certainly would likely be exaggerated!