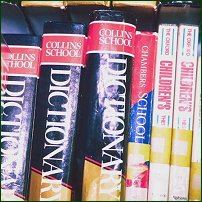 Thank you for all the comments you posted on the previous quiz (Winter 2010). While we wait for the next dictionary update in March, I thought I'd post a retrospective quiz containing words from years gone past. Actually, it's not even one year past: these words were all added in June 2010.

These days, the OED's lexicographers publish quarterly updates to the online edition. On 1st June, 2010, they reviewed and updated, among other sequences, all the words lying alphabetically between 'Rh' and 'rococoesque'. In so doing, they spruced up entries like 'ride', 'ring' and 'rise', as well as 'rhinoceros', 'rock and roll' and 'rocket'. Among the more common new words they added in this sequence were 'rhinosinusitis' and 'ring tone'.

They also added a small batch of new words from across the alphabet, one of the the best known of which was 'scissors paper stone'. Now, I actually prefer to play this game as the variant 'cow bomb lake' (cow drinks lake, lake envelops bomb, bomb blows up cow). The actions are self-explanatory: two fingers pointing from the forehead make horns for the cow (or you can just bellow a loud 'moo'); Make yourself very fat and puff up your cheeks for the bomb; and spread your arms wide for the lake - undulating a flat palm like a cricket umpire signalling four runs is an alternative action. I hope to see this popular variation enshrined in the dictionary some time soon.

The other new words added to the OED in this update were maybe a little more obscure, but how many of them can you identify? I've listed 20 of the new words added in June 2010, and have given four possible definitions for each one - can you spot the correct one?


a) a Caucasian dwelling


a) a cooking utensil

b) a musical instrument

c) a type of sponge


a) a Malaysian curry

b) a medicine bag


a) an Asian unit of currency

d) a measure of land


a) an ant colony

b) a carriage workshop

c) a type of cell wall


a) an agricultural tool

b) a civil servant

c) the science of rhythm

d) a type of marble


a) an astronomically large number

b) a construction worker

d) a variety of poppy

b) a North American tree


a) a bird of paradise

b) a concave surface


a) an architectural moulding

b) an eyespot on a butterfly's wing


a) a braided jacket


a) an anti-cancer drug

b) the honey buzzard

d) a secluded piece of land

b)
an impressive person

c) a move in surfing

d) a stanchion on a biplane

b) a circus performer


a) a geometric puzzle

b) a quad bike

b) a drug addict

d) a genre of blues music