Today has been an odd day and I’ve been a bit off, now I come to think about it. It was stupid hot inside the ship today, which does nothing to improve my mood, that’s for sure. Why, I have no idea, but it was quite unpleasant. If I wanted to be that hot and sticky, I’d bung some suncream on and go out and sit in it. If I’m indoors, I expect to be cool, thank you very much. The humidity is skyrocketing as we pass between Indonesian islands on our way to Singapore, so it’s not very pleasant out, or in, for that matter. The weather forecast for Singapore tomorrow, according to CNN, is 32 and stormy. We get there the day after tomorrow. Maybe the storm will clear the air. Live in hope.

But by heaven, there’s some dull people on this ship! Good grief! We went to the restaurant for lunch, instead of the canteen we usually use. The food was lovely but the company was surprisingly dull. Even the couple we thought would be interesting were so deaf they barely participated. Quite a struggle just keeping conversation going. I passed the time trying to photograph the sea, which was so flat and smooth it looked like rippling silk. Not easy to capture, I can tell you.

I have been hit in the past hour by a wave of overwhelming depression. I was talking to someone in the nightclub and I suddenly realised I was welling up with tears. I had to excuse myself and leave. This evening I saw Up In The Air, the George Clooney film about a frequent flyer. It had a sad and unsatisfying ending. Maybe that’s what’s done it. Until then, I was feeling fine, I think. Tonight was another formal night and I wore another of the new dresses – the red one this time. I felt good in it and got several compliments. Then I went to the cinema and now I’m on the verge of tears. I suppose it must be the film that did it, but I must be fairly hormonal to be that susceptible! It wasn’t THAT sad! Come to think of it, everything has smelt bad today, so, yes, my hormones must be playing up. My sense of smell gets very acute towards the new moon. Look it up in the diary. Today IS the new moon. Conundrum solved. Huzzah for being female. Yay. Ain’t life grand?

Spanish class today was interrupted and curtailed by announcements from the bridge. Which was forgivable because we were passing Krakatoa. How cool is that?! Unfortunately, this meant twenty or more minutes of blathering nonsense from the onboard speaker who twittered inanely over the tannoy system, talking and talking without actually saying anything. Knowing when it exploded (27 August 1883) is all very well and good, but he didn’t seem to know much about it! He mentioned the size of the explosion and how far away it was heard (3000 miles), but I didn’t hear him even mention the nuclear winter that ensued or WHY the eruption was noteworthy. The explosion blew the island apart (which he didn’t mention) and created a new one, called Child of Krakatoa, which is an active volcano that spews out enough gunk to cause it to grow in height by 16 feet a year. That’s a centimetre a day in height. A foot since we set sail. Currently. Right now. As we speak. It’s a foot taller now than when we left England. Wow. How DEEPLY cool is that? 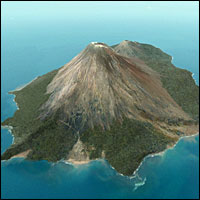 Instead he just kept talking about each US warship sunk near here by the Japanese, which although it is important to know and appreciate, seemed of limited relevance when we could be talking about a volcanic eruption that caused death and destruction all over the globe. Seriously? Could you not maybe do SOME research before you do this stuff? How hard can it be? You probably only mentioned the thing about the film Krakatoa: East of Java being dodgy because Krakatoa is WEST of Java (seriously - did no one in Hollywood get fired for that?!) because the Captain said it last night in his announcement.

Most people who have heard of Krakatoa know about the nuclear winter. How can you not, when you’re being PAID to know this kind of stuff?! Really? Crops failed, people starved to death. Hello? Duh? Maybe just one iddy biddy mention of the dust cloud? Blocking out the sun ALL OVER THE FACE OF THE EARTH? For MONTHS? Affecting harvests, tree growth, human and animal health and growth, even the colour of the sky in contemporary paintings? Just one? No? No mention of the dust layer in the tree ring record? In EUROPE? Or in the Arctic ice record? Nope. Just lists of dead Americans. No idea. Not a ruddy clue. Sigh. I know I’m hormonal today, but anyone would find it frustrating. It really can get a bit teeth-grindingly annoying at times.

Anyway, Krakatoa. I’ve seen it. It’s amazing. It just looks like a triangular/pyramidal island with trees on, but when you know what happened here, it’s awe-inspiring. And very slightly unnerving. After all, we were VERY close... gulp...

Like I said, it’s been a funny day. Today a man got in the lift and pressed the button for the deck he was on. And seemed surprised when the doors opened again. I was queuing in the ladies' and a woman was washing her hands. I supposed she wanted to make conversation, so she commented on how hot it is in the ship today. While USING THE HAND DRYER. When I suggested she’d be cooler if she stopped the dryer and used a hand towel, she was quite nonplussed by the idea. I kid you not. Didn’t dawn on her that sticking her hands into a stream of HOT AIR might make her feel hot. In the face of all of which, I completed both the sudoku and the crossword.

Sometimes, I feel so overwhelmingly intelligent compared to the other passengers, it quite frightens me. They can’t possibly like me. I wouldn’t! But I can’t help it if I have more intelligence and common sense in my little finger than you have in your entire brain. It’s not my fault you’re a mouth-breathing idiot who’d forget to breathe if it wasn’t a reflex, is it?! Still makes me uncomfortable sometimes. They really are a quite astonishingly dense bunch, they really are. Roll on another brain/mind discussion, where I at least get some intelligent conversation for an hour or so.