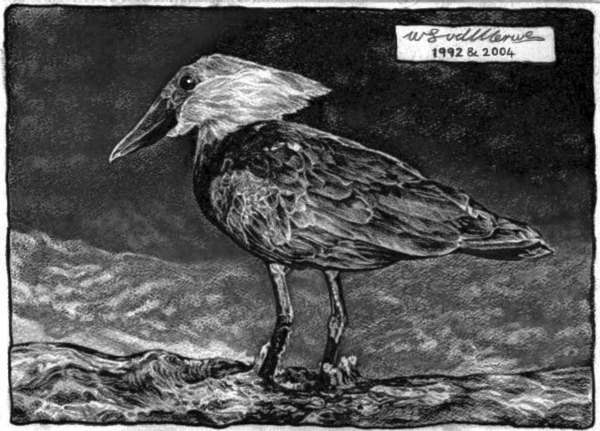 In the hot, dry savannahs of South Africa, rivers are few and far between. The ones that are there, wind their way to the sea in typical African leisure ... in some months of the year, not even flowing at all, but simply consisting of stagnant pools here and there in the sandy riverbed. As the joke goes, "what do you do when you fall in a South African river?" Answer: "stand up and dust yourself off." One river around here is even called the Sand River, because most of the time it's just a sandy riverbed. When we see the river with actual water in it, it's an occasion.

Nevertheless, the rivers that do exist, are precious lifelines. Even if there's no water on the surface, there's subsurface water in and around the riverbed. In narrow ranks on the riverbanks, tall trees grow with permanent access to the water table. They grow large and luxuriant, in contrast to the short, stunted trees of the surrounding dry savannah.

Sometimes in one of these tall riverbank trees, you will see a large mass of tangled, dead vegetation. It looks just like driftwood that got stuck there after one of those infrequent floods that happen during years of exceptional rainfall, when the river sometimes rises many metres above its usual level. Well ... that does happen, so maybe it *is* just driftwood. But maybe not. Look closer ... you may discern that it's looking a bit too neat and solid. Maybe you might discern a hole near the bottom. And if you are lucky, you will discern the final clue, on or near it : a drab brown bird, a tad smaller than a chicken, and with a very strangely shaped head.

If so, congratulations! You have seen one of the most amazing of all bird's nests, and its equally amazing maker, the Hamerkop.

I've just written a piece about classifying living things, and in the Hamerkop we have a perfect example of a species that defies our attempts at classification. About the most we can say about it, is that it is definitely a bird. But what kind of bird? It lives close to water and catches its food there. But it's not a duck, that's for sure. Is it a kind of heron or egret? No. Is it a kind of stork? No, not that, either. An ibis, maybe? No, certainly not. It might be related to them, but only distantly. Most of the time it is classified as being in the *order* of the herons and storks and ibises, the Ciconiiformes, but in a species, genus, and family all of its own: Scopus umbretta, in the family Scopidae. But there are recent indications it may not even belong in the stork order, but perhaps might be closer to the order of Pelicans, Gannets and Cormorants – the Pelecaniformes.

Here's a black-and-white sketch of a Hamerkop. You can easily add colour with your imagination: it's brown. Neutral brown, all over, with just a slight purplish gloss on the back:

The name, "Hamerkop" simply means 'Hammerhead' in Afrikaans. It refers to the shape of the head, with the bushy crest at the back looking like the rear 'claw' of a hammer.

Hamerkops are quite frequently found wherever there is just a little bit of water. They can for instance easily be seen in the Pietersburg Bird Sanctuary, where there are a number of pools containing water after treatment at the water purification works.

Their nests are usually in large trees, but occasionally in other places, such as on riverbanks or even rocky hills or cliffs close to water. They are compulsive nest builders – continually adding to their nests, or building new ones, whether they are rearing a brood or not. The nest is made of sticks – and often other kinds of objects found floating in the river – cemented together with mud. It can be over a meter in diameter. Despite the untidy exterior, internally it is neat, with mud walls lining the entrance tube and inner chamber.

In this huge nests, the hamerkops lay three to seven eggs, and raise their chicks. The newly hatched chicks are downy but helpless and need intensive parental care to get them going. Hamerkops may breed any time of year, seeing as they inhabit the tropics and subtropics. They are sedentary, pairs holding a particular territory with its nest/s. Sometimes, though, when flooding occurs in years of heavy rain, hamerkops will move out to take advantage of new suitable habitat.

Hamerkops eat mostly frogs and tadpoles, but also fish, other aquatic animals like shrimps, and they occasionally catch rodents. They also have a very characteristic cackling/chattering kind of call.

Hamerkop behaviour is unusual. A very strange social ritual of Hamerkops is that of their 'Circle Dance'. Two or more birds join each other in a ceremony of running circles around each other, while chattering, cackling, raising their crests and fluttering their wings. When foraging in shallow water, Hamerkops will stir up the bottom by shuffling their feet, and watching for any small aquatic creature trying to escape. Sometimes they will perch on the backs of hippopotamuses – even using them as mobile hunting platforms!

The strangeness of Hamerkops have made them the stars of many myths in Africa and also Madagascar, where they also occur. Mostly, their mythological status helps them to be left alone by people. Some African peoples claim that other kinds of birds will help Hamerkops to build their nests. Hamerkop nests are seen to bring bad luck, and human huts have to be situated away from them – and sometimes furnished with a little wooden Hamerkop statue at the front of it, to show Hamerkops that that particular hut is already inhabited, and so keeping them away!

The Khoi People of South Africa have great respect for them. A Hamerkop wading in shallow water is said to be looking at the reflections showing them THE FUTURE! They can see what calamities will happen and who is going to die soon. They also watch for falling stars – a star falling above someone's house, meaning that that person will die. When a bird receives such an omen, it is said to fly to the hut of the doomed person, and utter three mournful cries over it.

San people of the Kalahari believe lightning will strike whoever tries to rob the eggs from a Hamerkop nest! They also believe that they risk the displeasure of the wicked god Khauna if they should kill the bird. In Madagascar, the Malagasy consider the Hamerkop to be evil, and believe that leprosy will afflict someone who destroys its nest.

The Afrikaans poet D. J. Opperman, wrote a striking poem, Ringdans van die Hamerkoppe (Circle Dance of the Hamerkops) about this bird, from the perspective of an old Khoi person, in which the supernatural aura of the bird features strongly.