And I think to myself, what a wonderful world!

Fans of Douglas Adams's Hitchhiker's Guide to the Galaxy will know of the special place in the universe of the number 42. I won't elaborate further. Since no month has 42 days, there has never been a 42nd day on which to celebrate the all-important number. Until now. Some ultrageek

Belfast is only a couple of hours away from Dublin on the train, so I decided to attend the party, even though it was on a Sunday. This would mean that I'd have to get the train back home early on Monday morning and arrive in work late, but the people in work didn't mind – I'm due a few hours because of working long days back in June. The party was to be a house-warming and 'near birthday' party as well.

Arriving at the station with 20 minutes to spare, I quickly bought my ticket and found a seat – it's not difficult to find a single seat even with a few minutes to go. The Enterprise is probably the most comfortable train in Ireland, with automatic opening doors, air conditioning and a very smooth ride on continuously welded track, so you hardly notice you are moving. The stretch of track from Dublin to Belfast is not the most exciting in Ireland, although it does have some pretty stretches – along by the sea in North County Dublin, and up into the hills in Armagh. For most of the journey, I amused myself doing the latest craze in our house, Killer Sudoku. The train arrived in Belfast Central Station at 3:07pm and Beatrice had kindly offered to collect me, saving me the hassle of a long wait for a local train or a long walk. As I walked from the train, I wondered would I remember what Beatrice looked like, as I had only met her in the flesh, as it were, on one previous occasion and I suffer from an inability to recognise faces. I'm sure there's a medical name for it. But I need not have worried. There was a small, smiling woman, wearing a T-shirt which said "OH NO, NOT AGAIN" on it. We exchanged the customary greeting hug

and she drove me to her house.

Preparing for the Party

The party wasn't due to start until 4pm, so Beatrice had a little bit of work to do – she'd prepared a lot of Hitchhiker-related food, including "flying saucers" and small jelly "Babel" fish, and there were other more normal party foods disguised as Hitchhiker-related food, such as Pizza Magrathea, as well. Through the miracle of clipart and Office 2007, she quickly printed off menus. The central event of the party was to be a viewing of the recent movie of The Hitchhiker's Guide to the Galaxy, accompanied by the consumption of Pan-Galactic Gargle Blasters

. Adams's writings mention the lethal power of this cocktail but his recipe includes ingredients not easily acquirable on this planet, so we decided to use the ingredients of a Milano cocktail: gin, Galliano and lemon juice in equal quantities. Beatrice couldn't believe that we needed quite so much lemon juice as that, so we made a test version, juicing a real lemon. One sip each convinced us we had the perfect recipe, and it looks a vile yellow, too! So B's daughter was sent off to the shops to buy lots of lemon juice – she came back with about six of those little plastic squeezy lemons full of lemon juice.

To create the right ambience, we put on the DVD of the old Hitchhiker's Guide TV Series from 1981, with Simon Jones as Arthur Dent. We weren't expecting anybody to watch this, but it would provide suitable background noise.

Quite a few h2g2 Researchers had been invited to the party, but at the end of the day, due to unforeseen circumstances, the only ones present were Beatrice, Fizzymouse and myself. Fizzymouse was not well at all, having caught a really nasty cold and was gasping for breath and gravel-voiced. She couldn't stay long.

But despite this lack of h2g2 presence, there were lots of other Hitchhiker fans; Beatrice introduced me to friends and relatives, all of them familiar with the series, and willing to throw in a Marvin reference at a minute's notice. I was surprised to meet one man who actually works as an Ada programmer – this may mean little to you non-programming readers, but Ada was the programming language invented to write programs that don't go wrong. It has the most complete error-checking of any language and is used for writing software for guided missiles, defence systems, and, in this case, aircraft control.

The party invitations had mentioned Fancy Dress (optional). The guests, including myself, all chose to opt for normal dress, and only Beatrice herself adopted a costume, with an amazing hat which turned her into a 'Bowl of Petunias'.

The Skype Session and the Food

We had arranged to talk to Bel, the Post Editor, who lives in Germany, using a Skype connection. This was supposed to take place at 5pm, but there was some mix-up, and we didn't get to talking until about 6pm. Fizzymouse, Beatrice and I sat in the garden and talked to Bel, a thousand miles away, as the sun shone in a clear blue sky, aeroplanes landed nearby (Beatrice lives close to the airport) and, unbeknownst to us, the guests inside the house ate all the food!

It was lovely to see Bel – the connection was a little bit slow, so although we could hear her perfectly, the picture froze occasionally, catching her in various attitudes – like a series of still photos, of Bel laughing, Bel surprised, Bel puzzled, Bel joyous – she's a very pretty woman and looks good no matter what. Eventually it started to get a bit chilly as the sun had set, and we had to wrap up the Skype session. Fizzymouse didn't want to come inside and infect us all with her cold, so she said goodbye at this stage and left.

The Movie and the Pan-Galactic Gargle Blasters

It was interesting to watch the recent movie having just seen bits of the old TV series. They were so similar and so different. But we didn't all sit silently and watch. People were coming and going, and there was a constant flow in and out of the kitchen, finishing off the last of the food and making the other star of the evening, the Pan-Galactic Gargle Blasters! 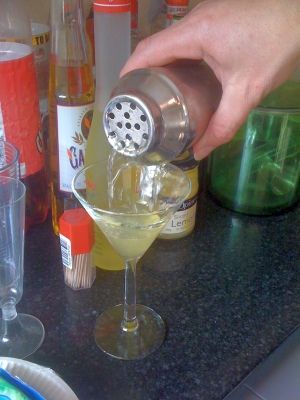 The effect of these is supposed to be "like having your brains smashed out by a slice of lemon wrapped round a large gold brick". It was. This experience wasn't to everybody's taste, but some of us consumed sufficient of them to make a serious dint in the bottle of Galliano! We should perhaps have noted the advice of Zaphod Beeblebrox, who said "never drink more than two... unless you are a 30-ton mega-elephant with bronchial pneumonia". Unfortunately, we didn't, and we did... The effects on the rest of the party are best described in pictographic form. I'm not sure that this will make much sense to anybody except Beatrice, or possibly 2Legs.

Sleeping as I was on an airbed on the floor of Beatrice's study, I was woken up at 6:30am when her computer decided to turn itself on.

But that was OK, because I was getting up at that time anyway. I struggled around an unfamiliar kitchen, full of empty glasses and the debris of a good party, totally unable to find the elusive light switch, and helped myself to a bowl of cereal. Then Beatrice, ever the gracious hostess, appeared to say goodbye

and I trudged off into the morning to catch my train into Belfast Central, ticket to be bought from the 'wee man on the train', and then the Enterprise back to Dublin.

All in all, to quote Douglas Adams, a good gig!

Notes from Around the Sundial Archive