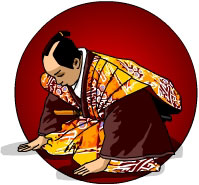 So here I am. Owing to a set of circumstances largely beyond my control, I find myself living and working in Japan. I could tell you the circumstances, give reasons or excuses, but telling you isn't going to help. Let's face it, life – and other four letter words – happen.

Bureaucracy (Excess of) and Thought (Lack of)

I've got it! It's all about the system. In Japan you are not an individual. Not even on your own time. Wherever you are, you will do as the system requires.

In school you will listen. You will not participate, you will not ask questions. Teenagers may have coloured, spiky hair and hang out on street corners or wear goth-lolita fashion, but they must conform to one of a few definable groups. Their rebellion must be visual only. At home they won't cause problems or complain. It's all about the system. At work you will do your job. Do not try to improve your performance. Don't THINK about anything, especially here at Pimie Lever language school. Fulfil your function in the system.

Sometimes foreigners are expected to be different. The Japanese are utterly polite to this wretched gaijin, but rarely actually help. At an optician's, my girlfriend got the wire round her lenses changed for free, they brought us tea while we waited, also free and there was plentiful bowing on our departure, although we had spent nothing. That's just what they do, you see. An hour later and my attempts to buy a postcard were repeatedly thwarted as they were only sold in packs... in a popular seaside town. Could I just buy one or two from the pack? No, very sorry. There... that individual one you are showing me, in your hand now, can I buy that one? No, still very sorry. The idea that selling them separately at a higher rate per card would generate a lot of sales otherwise missed simply did not occur. It would have required thinking, you see.

The gas company repeatedly tried to charge us for usage before we moved in, even though they agreed we weren't there – because that was the system, that was what was on the bill. Confronted by myself and my girlfriend, who had become accustomed to my British standards of complaining, they had a customer refusing to pay, on principle. They didn't understand – that's the bill, that's the system, you must pay. We didn't use the gas, you know this, you agree with us, why are you charging us? That's the system. The system's wrong? It's the system. Moral high ground meant nothing; it took weeks for someone senior to eventually become involved and pro rata the bill, only achieved through our intractable position.

We reserved a sofa and asked for delivery, but were told it could only be done on a weekday, when we were working. The shop was open 7 days a week, we offered to pay extra for the delivery, but that was not the system, so we couldn't get the sofa. Why was it, months ago when I encountered a collapsing drunk, that a foreigner was the person who helped the drunkard up? Well, there's no rule of etiquette requiring the Japanese to do it, so they don't think to do it for themselves.

Why do so many children go to cram schools, then work long hours as adults with low job satisfaction, becoming ever more distant from their partner? Why is the retirement age so low in the country with the highest longevity, why are taxes so low and why is there a pensions crisis nobody seems interested in tackling? Well, anything else would mean changing the system and they don't do that.

In Akira Kurosawa's Ikiru, bureaucracy is mocked, as attempts to get council permission for a play area get passed from department to department, everyone trying to avoid the responsibility of taking a decision. Once the chain of command is in place, each person passes it to their boss for approval, so they cannot be blamed themselves; the processes are interminable. Only when the central character is faced with terminal illness does he begin to realise the inconsequentiality of his existence – all those years in the job and he hasn't actually DONE anything.

When my girlfriend moved back to Japan, nobody told her extended family she was even back – apparently no-one thought it was worthy of interest that a family member was moving country. Such is the limit of Japanese people's apparent capacity to think, that when she announced she was leaving work, no-one asked why, which is particularly strange in a country that's still not moved away from the job-for-life culture. They said all the other polite things – "That's a shame", "We'll miss you", but no thought to what she might do next.

The general Japanese view is not like that of the friendly tourist caricature; they are very insular and don't think about what's outside their needs – if it's not part of the system, it doesn't exist. I'd add a glib closing remark here, but no-one told me to.

The Reluctant Gaijin in Japan Archive