It has just come to my attention that a Russian astrologer is suing NASA, the American space agency, for $300 million in damages for 'moral suffering'. The cause? NASA's Deep Impact probe, which crashed into the comet Tempel 1, 'ruins the natural balance of forces in the universe', and may 'deform her horoscope'. Ahem.

NASA and the Jet Propulsion Laboratory do not seem to be taking this too seriously. This is a mistake. Wanton experimentation with alien real estate could lead, and indeed in the past has led, to grave interplanetary repercussions.

To begin with, astrology is not a pseudoscience to be tampered with lightly. The galaxy-wide Association of Astral and Academic Seers, or AAAS, which meets, at a stardate interval agreed upon after much discussion and two hotly-contested space wars, on the space station at Omicron 7, takes very seriously indeed any unilateral rearrangement of the relative positions of heavenly bodies. Astral seers have worked out, at an effort so monumental as to cause this professional specialty to be listed among the '100 occupations most likely to lead to brain death', a method of calculating the horoscope of any sentient being in the galaxy, no matter where in spacetime they were born, in accordance with a system of absolute reckoning in relative spacetime. These horoscopes are of such a rarefied accuracy, and so complex, that the calculations for a single horoscope are stored in a hyperhologram with a spatial interface of three cubic kilometers. Thus, owners of such horoscopes must not only be extremely wealthy, due to the enormous cost, but also possess a fair-sized chunk of personal real estate.

The rival, cheaper practice of drawing up a 'quantum horoscope', based on calculating the trajectory of a single photon travelling towards the subject from the centre of the dominant house at the moment of his birth, has been dismissed by the AAAS as 'gimcrackery'. Practitioners of quantum astrology, in return, refer to the AAAS as 'a bunch of stodgy morons with ice up their ephemera'.

Litigation on the subject of cometbashing, and similar questions of alien tampering, take up quite a lot of time on Omicron 7, which also happens to be the headquarters of the Galactic Institute for Interstellar Legal Quibbles. Questions of galactic law are often compounded by local statutes, which, depending on the level of sophistication of the planet in question, could involve penalties that are quite punitive, if not outright personal, as in the case of the Aluphid People of Bactria Minor.

The Aluphids so treasure any useful aspect of their personal environment, such as a large outcropping of rock, a spring, or a particularly nice tree, that anyone who removes or damages this feature is required, personally, to make up the difference in the locals' lifestyles that results. The fate of Fardar Macromil, a visitor, who, after chopping down a favourite flowering prunoid in the village of Upper Smallbottom, was forced to spend the rest of his life weaving leaves and blossoms into an arbour for shade, carrying bird's-nests in his hair and beard, and providing breezy whispering noises, is an object lesson in environmental responsibility that would melt a heart of stone. His suffering in the fall, when he was required to mimic the shedding of the foliage, was particularly acute, not to speak of the snowy winters. The annual mulching, with its attendant application of fresh fertilizer, is best passed over in silence. In later years, he ventured the observation that the only perk of his lifelong employment was the occasional hug he received from the stray nature-worshipper.

Another piece of quite interesting litigation arose when the citizens of my favourite planet, Betamax Delta, decided to erect a solar reflecting array to intensify the rays of their own weak sun, thus increasing crop yields, and incidentally getting great tans. Unfortunately, they failed to get prior planning permission from the GIILQ, and the resultant nuisance suits from neighbouring planets ('eyesore', 'spoils the view of the nebula', 'makes me squint') tied up the entire legal departments of six major governments and caused the collapse of Betamax Delta's civilisation.

Betamax Delta is a more primitive, but quieter place now, and the array was dismantled and sold at auction on G-Bay.

In light of the possibility, nay likelihood, of arousing ire in one's sidereal neighbours, organizations such as NASA would be well advised to plan their experiments with more care in future. After all, who wants to wake up to the sound of an Omicron 7 Enviropolice Battlefleet, broadcasting a cease-and-desist order from the ionosphere in 42 different languages? 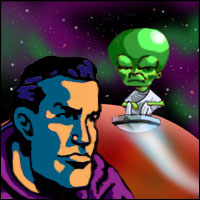