John Ridgway Save the Albatross Voyage 2003-4

AIM: TO PREVENT THE NEEDLESS SLAUGHTER OF THE ALBATROSS 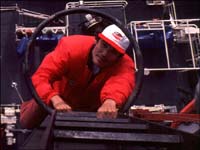 I was born in Lima, Peru, and as a boy lived pretty much unfettered except for a couple of short spells in the south of England. There was the sea, the desert, the mountains and the jungle, interrupted by school. At one stage I was sent to boarding school in Argentina to straighten me out, which it did for a while. There, on a school field trip to Peninsula Valdez in Patagonia, I had my first revelation.

I was sitting crossed-legged on a low sandy cliff overlooking the bay, watching the sun go down, when a whale stuck its fluke in the air and waved it at me, not fifty yards away. The whale, a right whale, was probably more interested in my school chums messing about on the beach below, but I was certain it was shaking its tail at me. I stood up and swore to protect him as long as I lived. The next day we all went back to school, and that was the end of my revelation.

I went on to try and finish my education in the UK. Having had enough of that, and the UK of me, I returned to South America. I missed the adventure. I sometimes thought about the whale but never really did anything about it.

Perhaps I was distracted. In Peru, you were always surrounded by adventure and nature was more or less taken for granted. My dad, an anthropologist and journalist, had arrived there from England in the early sixties to look for lost cities, I think. After he met my mum, a local beauty, she had to put up with expeditions into parts of the Andean jungle that were unmapped and still aren't. I was too small to remember, but my mum tells me we almost lost my dad once and spent days flying over the jungle, me strapped in a crib and not much use, looking for him. He turned up, thin but OK.
When I was about eight, my aunt Anna went down the entire length of the Amazon on an expedition led by John Ridgway. It must have been tough, because I don't think she ever spoke to him again. The team had readied their kit for the expedition at our house in Lima, and standing there, with all the talk and the equipment, I told myself this was the stuff I was going to do.

I more or less kept this promise. I joined several expeditions in later years and went with John a few times over the Andes and into the jungle, always managing to stay on speaking terms with him after each trip.
After I got back from the UK, I started my first job as a reporter and editor at The Lima Times, our local English rag. I became interested in the design, layout and production of publications. Copy deadlines were tough and I didn't care much for them, but here the pressure was more or less constant and from all sides, which I could handle.

I worked my way as a production manager for various publishing houses around South America, and eventually started my own business in Santiago, Chile. A few months of 120-hour weeks later, exhausted, I closed it down: we had no financial controls.
I took an extended leave into the Andes and the Amazon to sit and think, or just sit. This of course is the advantage of living in Peru. Once I was done with that I headed back and was hired to start up a new Lima newspaper, El Mundo. But that, too, disappeared though well-designed and much admired.
One morning, however, I sat down at my desk and found a fax waiting for me, marked 'Urgente'. It said, 'Igor, you only live once. Would you like to sail to the Antarctic? Into the mist... John'. So by the end of the month I was on my way to join the Ridgways on the English Rose VI for one of the last legs of its 1994-95 voyage halfway around the world.

Like any self-respecting Peruvian I arrived 24 hours late at the rendezvous at Port Famine, near Punta Arenas in Chilean Tierra del Fuego. Overdressed and with much too much luggage, I had no idea what to expect or what to wear to sail to the Antarctic. I'd been in the Beagle Channel with John before, first on a research trip to Cape Horn and later on the 1992 British Cape Horn Kayak Expedition; I'd messed about on my dad's 20-footer around the islands off Chiloe. Now I was staring at the Drake Passage which had blown away plenty of people before me.

John and the crew were kind, kept quiet about my gear and clipped my harness to the railings. Once I was no longer rushing to feed the fish after each bowl of porridge, I became aware of this paradox: The Liberating Effect of Being Cooped up with Seven People and a Cat in a Plastic Tube on the Ocean.

I no longer had to run around dealing with millions of people or work out what I should do for dinner or what shirt I should wear in the morning. Here everyone was stuck with clear jobs and responsibilities and toughed it out. Even the cat was tough. No shirking and no messing about or everyone could die. The universe was reduced to solely what you really needed, a few people who depended on you closely, and then the sea around you. And you had time to read, write and think about stuff.
It was also during this voyage that I had another revelation. On the Antarctic, whenever we stepped ashore we became acutely aware that there was nobody else around and that this land belonged to no man and no country, pretty much an untouchable gem like the moon.

The thing was that when we then returned to the boat, we should have felt that the same was true of the ocean around us, the oceans everywhere else for that matter. The difference here was that, though we couldn't see them, we knew the ocean was crawling with people busily cleaning it out of all its valuables. Something had to be done. If it hadn't been glaringly obvious to me before, it was now. I half expected my whale from Patagonia to jump up and give me the finger, or rather the fluke.

You'd think that now I'd do something about the whale. I went back to publishing, however, and worked for a number of years for the Peruvian government and the UN at a special promotion agency. I worked with extraordinary people under absurd pressure and fantastic deadlines, the fangs glistening. We were going to show the world and put Peru on the map. When I left I was burnt out, and had accomplished nothing to show the world or to put Peru anywhere near the map.

That was three years ago. I am now an independent publisher and producer, loosely associated with an outfit with offices in Santiago, Lima and Boston. I'm also a founding member and director of the Asociacion Andes y Mares, a non-profit organisation based in Lima, whose main objective is to create greater awareness and understanding about the Pacific Southeast and Antarctic environments.

A couple of weeks ago, I got another message. This one read, 'Are you interested in sailing with us ex-Capetown 20 October? Rapid reply please. Into the mist... John'. I'll be taking a smaller kit bag this time.

Back to the Contents page