Sagres, the Algarve, Portugal Content from the guide to life, the universe and everything 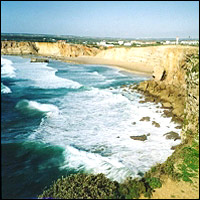 Sagres is a small town in the Algarve region of Portugal, in the far south-west. Although not quite a 'hidden gem', the town has largely escaped the over-development along much of the coast further east. It is also the gateway to the Alentejo and Costa Vicentina Natural Park, an area of low scrub, birdwatching opportunities and quiet beaches. Visitors wanting to escape the general mania of towns like Lagos could do a lot worse; though be warned, during the main holiday weeks in late July and August, the town can be overrun with surfers and accommodation can be hard to find.

Sagres was founded in around 1420 by Prince Henry the Navigator, although the name itself dates from the Roman occupation of the area (Promontorium Sacrum, or 'Sacred Promontory'). Dom Henrique do Infante, the heir to the Portuguese throne, was noted as a sponsor of marine explorations, though he never actually sailed on any of them. Here he founded a fort and seafaring school, and a small village called Vila do Infante, which complemented the shipbuilding port at Lagos. Though little is known of Henry, it is believed that he lived near Sagres for most of his life and died there in 1460 at the age of 64.

Henry's school served its purpose and pushed Portugal to the forefront of exploration. Thanks to his optimism for seafaring, the forbidding Cape Bojador in west Africa was circumnavigated for the first time in 1438 - the captain of that boat was Gil Eanes of Lagos. He paved the way for the golden age of Portuguese exploration in the reign of King John II, at the end of that century. Both Bartolomeu Dias, the first man round the Cape of Good Hope, and the legendary Vasco da Gama are believed to have studied at Sagres.

Being in a strategically important location, many sea battles took place in the waters off Sagres. A boat carrying Christopher Columbus was attacked by pirates and sunk here in 1476 - the young mariner swam six miles to shore - and Sir Francis Drake popped in to raze Vila do Infante after sending fire ships into Cadiz harbour in 15871.

However, the town's history has largely been a rather quiet one. Even during Henry's time, the area was unfashionable and most of the occupants were exiles. When Henry died, many left and the town rapidly went downhill; after the Great Earthquake damaged the church in 1755, the remaining few had to travel ten kilometres to Vila do Bispo to hear Mass. The town became a fishing backwater and would remain this way for centuries.

Thanks to poor transport links and being fairly remote from centres of population, the town escaped much of the excessive development seen in towns further east in the 1960s and 70s. There has been some expansion, but it remains one of the most laidback towns in the Algarve.

In a word: relax. If you're looking for all-night parties, beautiful buildings, quiet cobbled streets or a range of activities to keep yourself busy, this probably won't be the place for you. However, there are many opportunities to enjoy surfing and diving, particularly along the coast to the north of the town.

The small port is a hive of activity when the fishing boats are due in; it is well worth asking in the cafe what time the catch is expected in order to witness the hubbub in the indoor market beneath. In the summer, boat trips are offered, and dolphin and whale watching in the Atlantic are probably the most exciting activities you'll find in the area.

This limestone headland, just west of town, is home to a fortazela, or fortress, and was the site of Henry's school. The fortress looks very impressive and dominating from the outside, but inside there is little of historical interest. Only a small wall and a rather plain chapel remain from the Navigator's time; the rest of the structure dates from around 1800 and is architecturally uninspiring, consisting mainly of a large rampart and a couple of other buildings.

The views are inspiring and the birdlife tremendous; it is an important site for migratory species, including griffin vultures, which literally flock here in the spring. The place teems with local fishermen, apparently with no sense of vertigo as they perch high on the promontory a hundred feet or more above the water. Watching these men ply their craft makes Sagres Point well worth a visit, and results in many a photographic opportunity.

Cape St Vincent, six kilometres out of town, is known as Europe's most south westerly point, and has been a popular place to visit since Roman times. The Romans believed that the sun would fizz the water as it sank into the sea off the Cape, and it was a popular place to watch the event. Two millennia later it still attracts people to watch the last rays of the day. There is a lighthouse on the Cape, on the site of a 16th-Century Franciscan convent, guarding these rocky shores along with its twin on Sagres Point. Access to the end of the rock is currently not allowed3, rather disappointingly, due to restoration work taking place on the old convent walls; the last two hundred metres are bisected by a wall that runs from cliff to cliff.

On 14 February, 1797, a confrontation took place off the headland that would make a young sailor's reputation. On that day, 27 Spanish ships fought 15 of the British fleet at the Battle of Cape St Vincent. The British, finding the Spanish in some disarray, attacked immediately, and to cut off the Spanish escape the commander of the Captain sent his boat directly across the fleeing Spanish bows. In recognition of his courage and initiative, the commander, Horatio Nelson, was immediately promoted to rear-admiral.

In the town itself, the most easterly beaches4 are Baleeira, adjacent to the port, and Martinhal, which is accessible from the Lagos road and is recommended for windsurfers. Sunbathers make good use of these beaches, as the headland shelters them from the prevailing westerly winds, but they have little surf, as they face almost to the east. Windsurfers only need to head a short distance out to sea to catch the winds sweeping round the headland.

The tourist centre's closest beach is Mareta; an outlandishly long stretch of perfect sand. The beach is well serviced with two restaurants on the shoreline, and the charms of the sand have not gone unnoticed. Still far better than the heaving fleshpots of the main resorts, this is not a place for solitude in the peak season.

Surfers and visitors wanting some quiet should look further than Sagres Point. The first beach here, Tonel, is popular, but the tranquility increases as one heads closer to the Cape. The beach at Beliche is long and quiet, with good surf and at least a hundred yards of sand leading from cliffs to sea. The beaches beyond the Cape are often deserted, even during peak season.

The town, though small, spreads out considerably, and most places of interest - including the cafes, bars, shops and restaurants - are centred on the kilometre long Rua Comandante Matoso. This main street starts at the Porto de Baleeira, the port, and continues along the western side of the town to join the A22 - the main road to Lagos.

For now, Sagres remains blessedly free of the high-rise concrete monstrosities found elsewhere on the Iberian coast. At the time of writing, a new development is underway on Martinhal beach, however, so this fate may not be too far away. For the moment, hotel options are limited to the Pousada, an expensive place perched on a headland overlooking Mareta beach; the Navigator, immediately opposite; and the Hotel de Baleeira, a friendly and welcoming place with views over the port and Sagres Bay.

A smattering of private houses also offer rooms and studio apartments centred along Rua Comandante Matoso and the A22. The nearest campsite lies a few kilometres to the north of town; follow signs for Beliche and look for a well-marked right turn.

Although not actively encouraged, the locals seem tolerant of touring vehicles such as camper vans, as long as they do not impinge on the view.

Happily, you're unlikely to go hungry in Sagres - especially if you're a seafood fan - and again all the restaurants lie very close to Rua Comandante Matoso. Restaurants such as El Pescadore, Papa 2 and Restaurante Carlos offer virtually identical fare; good food at a low price. For traditional Portuguese food with daily specials, Rosalina at the A Roda - a fairly nondescript restaurant opposite the tourist information office - will bustle around in her tiny kitchen until you are thoroughly full. Rather than tell you the dish of the day, her husband Sergio will simply present one of the fish he has caught and ask if you would like to eat it. Priceless.

Good options also exist around Mareta beach. Aside from the popular beachfront bar/bistros, the Mar O Vista has a suntrap patio, great views and extensive food and wine lists. The friendly atmosphere justifiably makes this one of the most popular restaurants in town, and it remains busy even in the quieter winter months.

Except in peak season and holidays, don't expect to go to Sagres for a party. There are really only two options, both on Rua Comandante Matoso - the Dromedário, easily spotted by the cut-out camel above the door; and Agua Salgada, right next door. Both attract a young crowd and have themed nights in the summer; they prove so popular at busy times that the main road is often closed to allow revellers to spill out onto the street!

The Last Chance Saloon, above Mareta beach, claims to be the last place to get a drink before Madeira - though the small portable bar that serves thirsty customers on Cabo San Vicente would probably dispute this.

How To Get There

The regional capital, Faro, has airline links with all European capitals. Unless you have transfers included, you'll need to make your own way from here. A taxi from Faro airport to Sagres can cost anything from €80 (pre-booked) to over €250 on the meter.

Trains from Faro run regularly to the end of the railway at Lagos, 30 miles from Sagres. They connect with Lisbon trains at Tunes for those coming in from the north. Late at night, there may be no bus connections, so be prepared to pay €50 or more for a cab from here.

Bus services on the Algarve are infrequent and complicated to connect. If you plan to get to Sagres by bus alone, give yourself oodles of time and make sure your hotel knows if you are delayed.

Faro airport has the usual range of car-hire options, and it is also possible to rent cars in Lagos - your hotel may also be able to arrange this. Driving in the region has improved considerably since the A22 dual carriageway was upgraded in 2003.

1After being famously told by Queen Elizabeth I to 'singe the King of Spain's beard'.2Baleeira literally means 'whaleboat'.3In 2006.4Praia in Portuguese.5Pharmacy, if you didn't guess.