Bring Your Own Popcorn and Watch an Exploitation Movie: Roger Corman's Swamp Women Content from the guide to life, the universe and everything 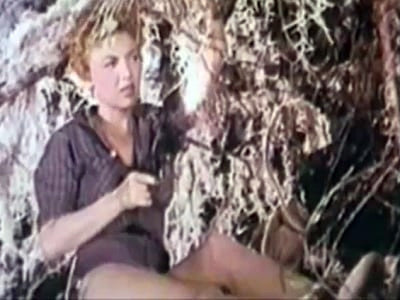 Ex·ploi·ta·tion film: a film intended to attract an audience by means of its sensationalist or controversial content.

When we think of exploitation films, one name that comes to mind is Roger Corman. Not only did Roger Corman turn out B-pictures at an amazingly rapid rate, he did them on budgets that would make a student filmmaker blush. For example, for the movie we're watching today, star Mike Connors earned a whole $400. When he tried to get more out of Corman for future film work, the director took him out to lunch – at a drugstore luncheonette.

'For three more pictures.' They parted company after tuna sandwiches.

In this film from 1956, Mike Connors, later star of such television classics as Mannix, doesn't have a lot to do. 'They [the female stars] had to trudge through the mud, the swamps, pulling this rowboats, and I was sitting in the rowboat high and dry1.' This is because Connors' character is a hostage, and the 'swamp women' are criminals. That's where the exploitation comes in.

The Plot, Such as It Is

Swamp Women (also known as Swamp Diamonds in an attempt to make it sound less like a horror film) has a 5% Tomatometer rating on the Rotten Tomatoes website and was lampooned by Mystery Science Theater 3000, so we know it's going to be great2. It clocks in at 68 minutes but seems longer. The action opens in New Orleans, at the Mardi Gras. We watch the parade. Say what you like about this film (and we will), it's definitely shot on location – much to Mike Connors' dismay.

Geologist Bob Matthews (Connors) is about to go on an expedition into the bayou country to scout an oil well. His clueless and money-grubbing fiancée Marie (Susan Cummings) wants to go along because she thinks it will be romantic. Marie lays it on thick about how her daddy thinks Bob is 'going places', which is why she is interested in him.

Meanwhile, over at the women's penitentiary, plucky policewoman Lee Hampton (Carole Matthews) has a tough assignment: convince a group of incarcerated gun molls from the defunct Nardo Gang to escape with her and go and find the diamonds the gang hid in the swamp. They can't get the men to do it because the whole gang got the Electric Chair. Escaping, of course, is the easy part (because it is rigged by the police), although the ladies do have to dodge machine gun fire (for verisimilitude, we imagine). They hop into a handy waiting car and speed off for the bayou. No one in this film ever runs out of petrol, ever.

In the bayou, the four women – Lee, feisty Josie (Marie Windsor), murderous Vera (Beverly Garland), and hapless Billie (Jill Jarmyn) run across Bob and Marie. Since Bob and Marie actually have a decent motorboat, they steal it and take them hostage. Bob doesn't give them much of a fight, but Marie actually tries to get away and is conveniently killed. This makes future scenes far less crowded, and Marie has served her purpose, anyway. Off they go in search of the diamonds. At least Bob doesn't have to do any work.

Have we mentioned that this film is shot on location in the bayou? There are actual alligators in those waters. One of the cameramen swatted away a water moccasin, we are told. These film people probably didn't even realise how many other things lurked in those waters they were so casually swimming in – ask a catfish noodler. Connors was deeply unhappy about the snakes and insisted they tape that rattlesnake's mouth closed before it was allowed to crawl across his leg3.

'I don't care what you like. Either tape that snake's mouth or get somebody else's legs.'

When the bayou fills with lily pads and the way gets tougher, the tough gals get going and pull the boat (and Bob Matthews) in an unfortunate homage to The African Queen. Of course, once they find the diamonds, the film turns into The Treasure of Sierra Madre. Betrayal is in the air. Bullets fly. People fall in love and out of trees. It's all very exciting.

Final plot note: This film passes the Bechdel Test, although by the skin of its teeth. Most of the women talk about Bob Matthews, most of the time. They also sometimes discuss the dead gang members. But they occasionally wonder aloud what they will do with their riches.

Why Is This an Exploitation Film? Count the Ways

Exploitation films seek to deflect criticism of their salacious content by pretending to inform the public for its own good. The public knows exactly what is going on, and comes for the sex, violence, drugs, and other illicit activities. To preserve appearances, exploitation films are usually careful to include thanks to local law enforcement. Praise of the brave men and women who do whatever brave men and women are expected to do to fight the horrendous menace of marijuana/teenagers with motorcycles/women in bayous is proudly displayed at the beginning and end of these films, usually (as here) with appropriately bombastic music.

In the 1950s, American audiences were well aware that women were far more capable than the standard Hollywood film would suggest. Women could climb trees, for example, or fire guns and shoot snakes, or even commit crimes. They might even tie up men. (Some men might even enjoy this.) However, seeing all of this carry-on onscreen was a taboo breaker.

It helped if the actors were nice-looking. It didn't hurt that the director decided the escapees needed to improvise cut-off jeans, even if wearing short-shorts in the middle of a bug-infested jungle is a really terrible idea. The optics were improved. This is exploitation: the audience is exploited, the actors are exploited (ask Connors), and the subject is exploited for all it's worth.

Fortunately, a good time is had, at least by the audience. The actors were probably glad for the short shooting schedule (it took two or three weeks, nobody could remember exactly, it was all a blur). At least they could get out of the abandoned hotel they were staying in – it didn't even have running water – and back to civilisation. The alligators and snakes probably said, 'Good riddance.'

To watch this film, click here or watch the embedded video below. You'll have to make your own popcorn.