Loving v Virginia: A Landmark Case About the Right to Marry Content from the guide to life, the universe and everything 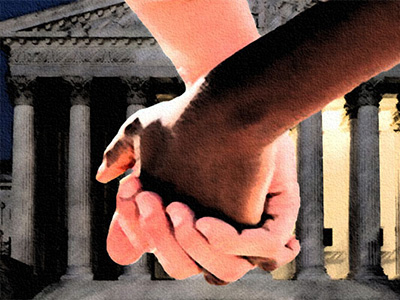 Who says the Supreme Court and romance don't mix?

They were young and in love. They ran off and got married. They moved back in with the bride's parents. So far, so normal, in 1958 Virginia. But then the sheriff came storming into their bedroom and arrested the couple in the middle of the night. They were thrown in jail. The judge told them they'd have to go to prison unless they left the state they were born in and didn't come back for 25 years.

Their crime? Having two different skin colours. Richard Loving (1933-1975) was white, and Mildred Jeter Loving (1939-2008) was Black and Native American. Virginia, it turned out, had an 'anti-miscegenation' law. As the judge put it:

Almighty God created the races, white, black, yellow, malay and red, and he placed them on separate continents. And but for the interference with his arrangement there would be no cause for such marriages. The fact that he separated the races shows that he did not intend for the races to mix.
– Leon M Bazile (1890-1967), January 1965

The Lovings struggled to make a living in Washington, DC, where they were legally married, but they missed their families and their home. Mildred appealed to the US Attorney General, Robert Kennedy. Kennedy advised them to speak to the American Civil Liberties Union (ACLU). They did, and fresh-out-of-law-school lawyer Bernard S Cohen took their case pro bono. It took almost four years, but the case of Loving v Virginia was a landmark in US civil rights history.

Before we tell you more, let's get a bit of background to place this decision in context.

How the Courts Work in the United States

What is a 'landmark' Supreme Court decision in the United States? Does it matter what this court says? To US citizens, it matters a lot. The Supreme Court of the United States, also referred to as SCOTUS, is the highest instance of a national judicial system that begins at local level. SCOTUS hears appeals from lower courts, but only when those cases involve issues of constitutionality. Each of the 50 states has its own code of laws – but those laws are subject to the principles outlined in the US Constitution. SCOTUS can decide whether a state law violates a constitutional protection. It can invalidate such a law.

The US Constitution, which is the 'law of the land', has been amended 27 times. The first 10 amendments, adopted at the time of the Constitution in 1789, are known as the (US) Bill of Rights. The 13th, 14th, and 15th amendments, adopted at the end of the US Civil War, outlawed slavery and guaranteed equal protection under the law to all citizens regardless of race, creed, or colour. This 'equal protection clause' has been very important over the years in advancing individual civil rights. Attorney Thurgood Marshall, who later became the first African American justice of the Supreme Court, argued the 'equal protection clause' to effect an end to school segregation in the landmark case of Brown v Board of Education of Topeka, Kansas in 1954.

And now, back to the Lovings.

Life in Central Point and Elsewhere

Central Point is an unincorporated community located at the crossroads of Passing Road and Sparta Road in Caroline County, Virginia. It's what Southerners of the 1950s called 'a wide place in the road.' The area is rural. What was remarkable about Central Point in the 1950s was that, unlike most places in the US, Black, white, and Native American people lived and worked side-by-side. Richard Loving's father was employed by an African American businessman. Richard pursued his hobby, racing cars he'd built himself, with his best friends – who were Black. People mingled freely, but didn't marry legally. That was because of the Racial Integrity Act of 1924. 16 US states had such laws on their books.

Mildred probably didn't know it was illegal for her to marry Richard. She was only 18, and a senior in high school. She only knew she was expecting their first child. (They had three in all.) Richard may have known about the law, but thought no one would mind as long as they got married out of state. This turned out not to be true.

Living in Washington, DC, in the years of waiting for their appeal to be heard, was trying for the Lovings. Washington may not have had segregation laws, but that still didn't mean an interracial couple were welcome in the better restaurants – or the apartment buildings in the 'good' part of town, where the lovely parks and good schools were. Mildred was shunned in 'white' areas, while Richard was made to feel an outsider in the Black community. They really, really wanted to go home to Central Point, where the colour of your complexion didn't matter.

When Bernard Cohen was finally able to appear before the Supreme Court for his oral arguments, the Lovings declined to attend. But Richard Loving had a message for the court: 'Mr Cohen, tell the Court I love my wife, and it is just unfair that I can't live with her in Virginia.' And that's what he did.

The Court ruled, 9-0, in favour of the Lovings:

Marriage is one of the 'basic civil rights of man,' fundamental to our very existence and survival... To deny this fundamental freedom on so unsupportable a basis as the racial classifications embodied in these statutes, classifications so directly subversive of the principle of equality at the heart of the Fourteenth Amendment, is surely to deprive all the State's citizens of liberty without due process of law.
– Loving v Virginia, 388 US 1

In other words, yes! Anti-miscegenation laws were unconstitutional because they violated the 'equal protection' clause of the 14th Amendment. All of those laws in all 16 states were immediately struck down. Also, Richard and Mildred Loving could go home to Central Point.

US history students learn about these landmark decisions. The changes they make in the law of the United States can have profound effects on daily life. The case of Loving v Virginia had consequences, not only for racial equality in the United States, but later, for other groups, as well: Loving v Virginia was cited as a precedent in the case of Obergefell v Hodges, the decision that granted marriage equality to same-sex couples.

Richard Loving didn't live to see all the effects of his actions: at 41, he died when the car he and Mildred were in was hit by a drunken driver. Mildred lost the sight in one eye. She lived to be 68, and left behind children, grandchildren, and great-grandchildren.

Couples everywhere still find inspiration from the determination of the Lovings. 12 June is celebrated as Loving Day. Songs have been written about them. There have been three movies.

'Last weekend I saw a bride and groom visiting and taking pictures behind the tombstone,' said neighbor Glenda Rinaldi, who lives next door to the cemetery. 'The bride was a black young lady, and the groom appeared to be white and Caucasian. I just thought that was awesome.'
- Sally Jacobs, WGBH Boston, '50 Years Later, The Couple at the Heart of Loving v. Virginia Still Stirs Controversy', 11 June, 2017

Would you like to listen to the Supreme Court case? Check out National Public Radio's ''Illicit Cohabitation': Listen To 6 Stunning Moments From Loving v. Virginia', from 12 June, 2017.