Gothic in the Wilderness: St Michael, Fryburg, Pennsylvania Content from the guide to life, the universe and everything 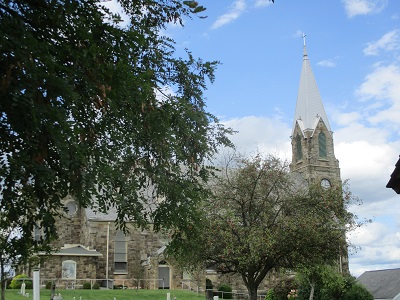 All Washington Township was astir last Wednesday morning when the sun peeped forth from a clear sky and kissed the gilded cross which summounts the lofty spire of St Michael's1. When the orb of day faded behind the western hills in the evening its last rays reflected on over two thousand disappointed people. This was the day set for the consecration of this elegant, sacred edifice…
…it was whispered that Bishop Mullen of Erie, who alone has the power to consecrate a church in his diocese, had failed to arrive.
–   The Clarion Democrat, 16 September, 1886

To avoid undue stress on the reader after the shock of that magnificent Clarion Democrat prose: they went on and had the celebration, anyway. Speeches were given, a sermon was preached, food and drink were consumed. The church did get consecrated, once the bishop managed to get there in August, 1887. But let's back up and tell you about the remarkable history of Fryburg, Pennsylvania (population2 444), and its even more remarkable church.

How to Get to St Michael, and What You Find There

To get to St Michael, start west down Highway 322 from Clarion, Pennsylvania. When you get to the traffic light in Shippenville, turn right and head north on Highway 208 for about nine miles (14km). Once you've passed Marble (population 381), you'll see the sign for Fryburg. Right after that, St Michael will start looming on your left. It's on a hill. The elevation of Fryburg is 1,686 feet (515m), and its what3words address is leopard.nobles.muzzle.

The Gothic edifice is superimpressive, 140 feet (42m) long by 65 feet (20m) wide. The outside walls are made of sandstone, in broken ashlar style, backed by 800,000 bricks. Rising above the steep roof (one-half pitch) is a 160-foot (49m) tower with a clock and steeple. Over the entrance stands the stone statue of Michael the Archangel, triumphant, holding a spear. On his shield are the words 'Quis ut Deus' – 'Who is like God?'

The stonework was done by a German mason, the bricks locally made by enthusiastic (and skilled) volunteers. The statue was commissioned by Fryburg resident Jacob Fasenmyer and made by H Fleige of Münster, Westphalia, where the design had to be submitted to rigorous critique by experts3. In all, St Michael is an imposing building to find on the side of a two-lane highway in farm country.

How Fryburg Got Its Name, and Other Historical Titbits

Christian Henlen was born in northern France in 1787. At 18, he emigrated to Lancaster, Pennsylvania. In 1815, Henlen moved to western Pennsylvania with his friends George Kapp, a native of Pennsylvania, and John Siegwarth, a childhood immigrant from Germany. They would have come sooner: they'd already picked out their land, but they got drafted into the War of 1812. The three men arrived in Conestoga wagons with their families, a yoke of oxen, and four cows. The land was wild, and there were no inns. They spent the first night at the home of 'Highland Alex', a hospitable Scotsman, in Helen Furnace, ten miles (16km) away.

These early German Catholic settlers farmed, hunted, fished and traded with the Native Americans who wintered there. They raised large families and welcomed new German Americans. Many of these settlers came from Baden (this is important). The new settlers had names that became well-known in the area: Eisenman, Rickenbrode, Ditz, and Fasenmyer. They worshipped together: in 1829, a Father O'Neil celebrated the first mass in the home of Jacob Eisenman. In 1836, they built a log church on the Eisenman farm. Bishop Kenrick came by and blessed it. 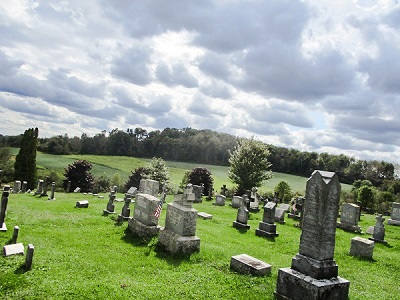 When it came time to name the community, opinions were divided. Some wanted to call the place 'Kappsheim' after George Kapp and his family. Others wanted to name it after a city in Baden. The Baden emigrants won out, and the community became Fryburg, after Freiburg im Breisgau. Spelling in 19th-Century America was a fluid quantity, although the first parochial school in the Erie Diocese was a log edifice on John Ditz's property built in 1856.

In 1871, the Fryburgers built a brick rectory and began work on a new brick school, hall, and convent for the Benedictine Sisters, who came all the way from St Mary's, Pennsylvania to teach. 60 miles (97km) was a bigger move in those days than now. In 1882 came the biggest step of all: laying the cornerstone for the new church, which was completed in 1886, at which time Fryburg also celebrated the 50th anniversary of that first humble log church.

Fryburg is a small community, not well-known to the outside world, but the church and its ministry thrive. Mass is served. Area residents and former residents gather to celebrate Oktoberfest and to purchase lottery tickets for those beautiful quilts the ladies make. Want to know the mass times? Try the website. Want to know more about the people of Fryburg? Explore the cemetery virtually. Do you want to know more about the historic completion of the church? This historical account is available on Youtube, and it's an entertaining tale. Would you like to see an aerial view of St Michael? We thank the Drone Guys, who have drones and cameras and are not afraid to use them in western Pennsylvania.

1[sic]. The church is called St Michael, not St Michael's.2As at the 2010 census.3The Clarion Republican Gazette of 1886 calls this commission the Archaeological and Christian Art Society of Westphalia, but it might have been the Westfälischer Verein für Wissenschaft und Kunst, of which 'H Fleige, Bildhauer' was a ranking member.