'No Time To Die' - Tales of Tank Warfare in the Libyan Desert Content from the guide to life, the universe and everything 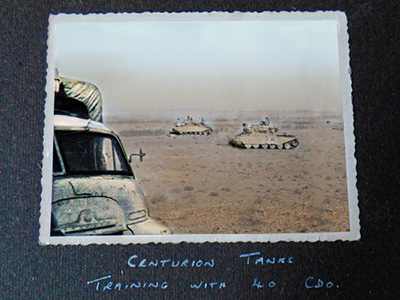 No Time To Die is a novel1 by Ronald Kemp that was first published in 1954. It is the story of Tony Allen, a (fictional) officer in the Tank Corps, who is a tank commander at the time of the conflict in the Libyan Desert during the Second World War.

There is very little information to be found about the author, but it may be assumed that he had personal experience of desert warfare (or had conducted in-depth research).

So why would anyone want to review a book that very few will have read and which is currently unavailable from the network of British County Libraries2?

This Researcher has personal post-World War II experience of the Libyan Desert where the conflict took place. The book brings back vivid memories of desert conditions: extremes of temperature, desert sores (scabs that ooze pus and won't heal on their own3), noisy tanks, and navigating by sun compass (somewhat less accurately than Tony Allen can). Kemp's description of tank warfare is both horrific and gripping, especially when participants are faced with superior armour and firepower.

Tony is badly wounded when his tank is hit by a shell. He is extracted from the wreckage by his superior officer, who forfeits his life in the process. Tony is captured by the Desert Korps and sent to an Italian Prisoner of War camp for officers. His legs are so badly mutilated that his movements are strictly limited and he becomes bed-bound. A British doctor, also a prisoner of war, tends to him with minimal medicines and equipment and maintains his condition.

After lengthy internment, he and the doctor are repatriated on humane grounds and he continues to recover in Britain. One would assume from his mental condition that he is suffering from what would nowadays be called Post Traumatic Stress Disorder. Tony and the doctor remain close friends, and the support and encouragement enables Tony to accept a position in India after his mentor's sudden death from heart failure.

It is during Tony's journey by sea to India that his ship is fatally struck by two torpedoes from a Japanese submarine outside Aden. Tony finds himself trapped in his cabin in a sinking ship.

So why is the book titled No Time To Die? Is it because his life is so hectic and fraught that there is simply not enough time available to pay the ultimate sacrifice, or because the time is not the right occasion to die?

Trapped in his cabin and prepared to die and join his late friends, he decides that he will be letting down the memory of his friends if he does not try to save himself - hence it is not the right time to die.

You may ask why this Researcher has an interest in this book. The reason is that he was serving with 40 Commando, Royal Marines when they were involved in six weeks' desert training in Libya towards the end of the year 1957. This involved exercises with the British Tank Corps, who were using Centurion Tanks at the time. On a leisure day, we were asked if we would like to visit one of two film locations: Ice Cold in Alex, or No Time To Die. As the latter starred a Hollywood movie star, Victor Mature4, the majority vote was for No Time To Die.

When we arrived at the movie set, we saw Leo Genn made up with copious amounts of fake blood round his midriff, obviously a 'fatal wound'. Anthony Newley was practising firing a sub-machine gun with a pipe connected to a generator passing up his trouser leg and into the gun to create flames. Victor Mature was practising pulling the pin from a hand grenade with his teeth. We advised him that this practice would in reality cause extensive dental damage, but he persisted for the sake of movie protocol. Fortunately, his grenade was made of balsa wood and had no pin. Victor Mature and his stunt double were very friendly towards us, chatting and posing for pictures. The British actors were not so kindly disposed towards us. There was also a Centurion Tank decorated with Panzer Korps markings and disguised as a Tiger Tank.

Watching the movie on DVD over 60 years later, it was amazing to see that the film bore no resemblance to the book at all. The movie titled No Time To Die was produced by Cubby Broccoli and directed by Terence Young with a screenplay by Richard Maibaum (who went on to work on screenplays for James Bond Films with Cubby Broccoli5) and Terence Young. It is very watchable, as war films go, with some creditable scenes of tank warfare.

The plot may be summarised as follows: Sergeant David Thatcher (Victor Mature) is an American serving as a tank commander in the British Army. After his group of tanks is defeated in the film's opening sequences, he is captured and, along with other troops, interned in an Italian Prisoner of War camp.

It becomes clear that he must escape, because he is wanted by the German Authorities in Berlin. He was married to a Jewish woman who was sent to Belsen, where she died on the explicit order of Joseph Goebbels, Minister of Propaganda in Hitler's Government. Thatcher tried unsuccessfully to kill Goebbels in a bomb attack, was captured and tortured (had his fingernails torn out) but refused to sign a confession that he was under orders from the American Government.

He makes two early escape attempts but is easily captured. A German Captain, played by Alfred Burke, recognises his man and alerts the Gestapo. Thatcher and Leo Genn's character escape in an ambulance, somewhat more successfully, until they are captured by Arab tribesmen. Thatcher is tortured under the auspices of the Gestapo Colonel but his right hand is mutilated so he could not sign a confession even if he had cracked.

An improbable escape then takes place - the German Captain sees the error of the Nazi ways, so with utmost compassion he gives the prisoners a pistol and commits suicide by shooting himself.

Thatcher escapes with Leo Genn and Anthony Newley in a stolen half-track vehicle and they get well on their way before it runs out of fuel. The next phase of this escape is to steal a German tank (this was the scene being filmed when we visited the movie set in 1957). They succeed, but Leo Genn gets shot in the stomach in the attempt. The Germans in turn destroy the stolen tank. Having evacuated the tank, the three hide behind a ridge and Leo Genn dies. Miraculously, Thatcher's hand has now fully recovered.

A German soldier leaps off a tank and captures them. Anthony Newley then remarks, 'Can't you even give a man time to die?' - the only reference to the title of the film. The British Royal Armoured Corps then come to the rescue, and the impressive sight of Centurion Tanks thundering across the desert landscape is probably the reason for the film's alternative title: Tank Force.

1Not to be confused with the 2014 novel of the same name by Kira Peikoff or the 2018 novel by Andrew Barrett.2Although copies are available for purchase online from time to time.3They were usually treated with Acriflavine, an orange-coloured antiseptic liquid that was liberally applied using one’s fingertip.4Perhaps best known for playing Samson in Cecil B DeMille’s 1949 film Samson and Delilah.5On 20 August, 2019 it was announced that the next Bond film would be titled No Time To Die - executive producer Barbara Broccoli, daughter of Cubby, was quoted as saying that she named it 'after one of her father's films'. Another novel with the same title had been self-published by Michael Parker on 14 August that year, so he got some free advertising in a newspaper article.