'Alone in Berlin': Everyday Resistance in Hitler's Reich Content from the guide to life, the universe and everything 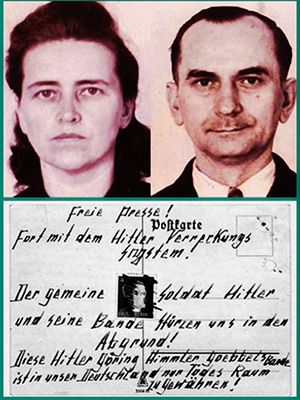 'Say, Quangel, how can you talk like that? You know I can get you put in a concentration camp for defeatist muttering like that? What you said is a direct contradiction of what the Führer says himself! What if I was someone like that, and went and denounced you...?'
- Every Man Dies Alone, p 22

According to Dr Stanley Milgram, two-thirds of humans anywhere will commit atrocious acts if a respected authority figure tells them to do it. That means that one-third won't. When we look at Germany under the Nazi Party, we naturally ask, 'Where were the one-third? Why didn't they just rise up and stop the madness? What were they afraid of?' The answer, as it turns out, isn't so much 'the Gestapo'. The real answer to 'What were they afraid of?' is 'their neighbours.'

That, in a nutshell, is the subject matter of Hans Fallada's intense novel Every Man Dies Alone. Based on real events, the posthumously-published work provides insight into the experiences of everyday Germans under Nazi terror, and their attempts at resistance. Spoiler alert: they don't manage to overthrow the regime. Most of the dissidents die in the end.

Hans Fallada (1893-1947) (this was his pen name) was at odds with society all his life. He was always shy. At 16, he was kicked in the face by a horse. In 1911, he made a suicide pact with a friend. They disguised their suicide pact as a duel. Unfortunately, the friend was a poor shot. While his 'opponent' died, Fallada lived on. He struggled with his sexual identity, was in and out of mental hospitals, and fought drug addiction all his life. None of this stopped him from being a powerful novelist. In fact, it may have helped. But he definitely knew what it was like to be an outsider, which made Nazi Germany perhaps less of a shock to him than to others.

Fallada didn't like the Nazis, and they were suspicious of him. In fact, they'd arrested him, but let him go. Beggars can't be choosers, however, and the Nazis had driven most of their writing talent abroad, so they put up with Fallada as long as he didn't write anything overtly anti-Nazi. Fallada had the chance to leave, but didn't take it. Homesickness can be a powerful motivator. He stayed and wrote under the radar. Once the war was over and the Nazis were gone, Fallada finally had the chance to talk about the things he'd witnessed. The result is Jeder stirbt für sich allein, or Every Man Dies Alone.

After the war, Fallada made friends with another German writer, named Johannes R Becher. Becher spent the war in exile in the Soviet Union and was now the head of the Soviet-backed Cultural Association for the Democratic Renewal of Germany. (Somehow, nobody choked on the irony of the name.) Becher, who was trying to help Fallada, provided him with a home, regular food, a job, and the suggestion that he write an antifascist novel based on the brief, doomed criminal careers of Otto and Elise Hampel. He gave Fallada the Hampels' Gestapo files.

Otto Hampel was a factory foreman. He and his wife Elise were working-class people who initially 'went along to get along' under the Nazi regime. When Elise's brother was killed in France in 1940, the couple turned against Hitler. They began leaving handwritten postcards in public places around Berlin that autumn. The cards, often badly spelled, said things like this:

Which more or less translates to:

Hitler has no wife,
The slaughterer no sow
The baker no dough
That is the Third Reich.
Hitler's violence against justice
Will bring us, the German people, no
Peace! Down with the Hitler gang

This was dangerous stuff. It was illegal to criticise the government: there was a law called the Gesetz gegen heimtückische Angriffe auf Staat und Partei und zum Schutz der Parteiuniformen, or 'Law against Perfidious Attacks on the State and Party and for Protection of Party Uniforms', Heimtückegesetz for short, that forbade snark, complaining, and 'defeatism', called Miesmacherei. Miesmacherei could land you in a concentration camp. Too much Miesmacherei could be called 'preparing to commit high treason', which carried the death penalty by hanging, garrotting, or beheading. The Hampels had to be really careful in distributing their seditious postcards. They could trust no one: Nazi Germany was a place where neighbours denounced each other to the police on a daily basis.

Surprisingly, the Hampels kept this up for two years. The Hampels distributed over 200 cards, with different messages. Almost all were turned in to the Gestapo by the finders, who were terrified even to be seen reading such deadly stuff1. The Gestapo stuck pins in maps to show where the postcards had been found. Unsurprisingly, the Hampels were apprehended, not through thorough police work, but because they were betrayed. They were tried before the infamous Volksgerichtshof, or People's Court, where Judge Roland Freisler was known to scream loudly at the accused for long periods of time. In 1943, they were executed by guillotine.

Fallada himself described Jeder stirbt für sich allein as 'a truly great novel' in a letter to his mother. It's an ambitious attempt to describe the experiences of the disenfranchised resisters in Hitler's Germany whose attempts to oppose the regime were ultimately futile in terms of any real change. This was true whether the resisters were aristocrats, priests, intellectuals, or factory workers. Fallada fictionalises the stories – the Hampels become the Quangels, for example – but he uses his fictions to portray the victims, perpetrators, and resisters who lived through this nightmare on the basis of first-hand knowledge.

Jeder stirbt für sich allein was published in German in 1947. Fallada didn't live to see its publication. Although the book was well-received, it was not a sensation. Most people liked Fallada's other books better.

The book wasn't translated into English for over 60 years. That's when Every Man Dies Alone became a surprise success. Maybe this was because a new generation was hungry for more information about the background to the Holocaust. Perhaps it was only in the 21st Century that the questions were being asked to which this book had some answers. It could be, too, that current debates about ethics and individual responsibility have reached the point where they could benefit from Fallada's insights into his contemporaries and their decisions.

Yes, There Is a Movie

You can find Jeder stirbt für sich allein or Every Man Dies Alone for sale online. You can even read the English version for free at archive.org if you're willing to wait in line.

There have been television adaptations of this work: in West Germany in 1962, in East Germany in 1970, and in the Czech Republic in 2004. There was a West German film in 1975. Currently, the best-known version is far and away Alone in Berlin (2016), the cinema adaptation starring Brendan Gleeson and Dame Emma Thompson and directed by Vincent Perez.

1For a clinical study of the extent to which citizens in the Third Reich internalised their fear of surveillance, see Charlotte Beradt, Das dritte Reich des Traums, Munich, 1966, which discusses the paranoid dreams of citizens living in Nazi Germany.