'Atonement' - the Novel by Ian McEwan Content from the guide to life, the universe and everything 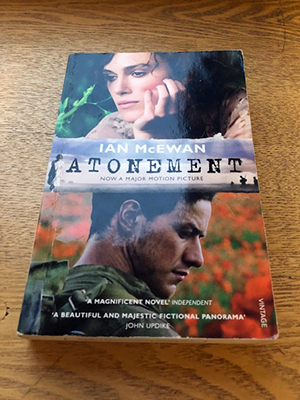 Ian McEwan is regarded as one of the greatest modern British writers. He was born in Aldershot, Hampshire in June 1948 but spent much of his childhood abroad, following the postings of his father, who was an army officer. Having returned to Britain, he studied English at Sussex University and joined the newly established MA in Creative Writing at the University of East Anglia. He began his career writing short stories on dark themes, but these were followed by a string of novels which include Enduring Love (1997), Atonement (2001), On Chesil Beach (2007), The Children Act (2014) and Nutshell (2016). Atonement was shortlisted for the Booker Prize. In 2007 a critically-acclaimed award-winning film adaptation was made.

Atonement purports to be written by Briony Tallis in her old age, to tell the story of events that happened when she was 13. These events changed her life and those of her family and she has sought to atone for her actions ever since.

The first part of the book depicts the wealthy Tallis family on their estate, during a hot summer in 1935. In the claustrophobic heat, tensions between family members builds up. Briony's father Jack is a senior civil servant who is often absent; her mother Emily is subject to migraines. Briony's sister Cecilia is secretly in love with Robbie Turner, who is the son of the charlady. Three cousins, the Quincey children, are staying at the house, following the break-up of their parent's marriage. Briony's brother Leon arrives with his friend Paul Marshall, who is a businessman dealing in chocolate.

Briony is an imaginative girl, who has written a play and tries to persuade the Quincey children to perform it. However, the young boys Jackson and Pierrot are home sick and their 15-year-old sister Lola undermines Briony's project. Briony witnesses a strange scene in which Cecilia takes off her outer clothes and plunges into the fountain to retrieve a broken vase. Robbie, who is watching, realises his childhood friendship with Cecilia has matured into passion. He writes Cecilia a note and asks Briony to give it to her sister. By mistake, he uses a draft which contains obscene words.

Briony delivers the note, but not without reading it first. She is so shocked by the language that she comes to see Robbie as a maniac. When Robbie goes to apologise to Cecilia they make love in the library, but are interrupted when Briony comes in. During dinner the Quincey boys disappear, leaving a note to say they are going home. Search parties are organised. Briony goes looking to an island in the lake and sees a man leaving after attacking Lola. Briony has built up such a picture of Robbie as a monster and a danger to women that she is sure he is the attacker. She testifies to that effect to the police. When Robbie returns, having found the missing boys, he is arrested.

A certain snobbery contributes to the family's readiness to blame Robbie. His position as the charlady's son makes him an inferior. His education has been funded by Jack Tallis, and, although Robbie has gained a first class degree and wants to be a doctor, he still is not regarded as their equal. The only other suspect is Danny the gardener's son, another member of the lower orders.

The next part is set in France in 1940 and follows Robbie, who has served a prison sentence for a crime he didn't commit. He has got out by joining the infantry and is involved in the retreat to Dunkirk. Although he is only a private, his education and general knowledge enable him to lead two corporals to the embarkation beaches. Cecilia, convinced of Robbie's innocence, has broken with her family and trained as a nurse.

The third part follows Briony, who has come to realise that she made a terrible mistake. She is nursing at St Thomas's hospital, which may be part of her penance. She uses a day off to witness the marriage of Lola to Paul Marshall, which confirms her suspicion it was he who raped Lola. She visits Cecilia in her flat, finds Robbie there and promises to issue statements clearing his name.

Atonement is beautifully written. The description of the house and park in the sweltering heat conjures up an atmosphere of languid inactivity, in which minor irritations bubble until they reach boiling point. The judgements which members of the Tallis household make of each other are shown to depend as much on class, wealth and education as character. However, the pace of the first part is slow and some readers might give up.

Although the retreat to Dunkirk has acquired the status of a legend of victory snatched from the jaws of defeat, the description in this novel shows it as blood-soaked chaos. The distressing conditions which Briony experiences in the hospital, as casualties arrive, are scarcely better. The war is important, as it breaks down the class structures in which the Tallis family existed.

The book is not just a description of an injustice committed and the breakdown of a family which results, it is also about writing and the writer. Briony is shown building narratives in her head and she fails to distinguish between what she has seen and her imaginative interpretation. The book ends with an epilogue by Briony as an old woman, which leaves the reader wondering how much of her account is true. The result is a book which asks about the doubtful edges between fact and fiction, the perceived and the imagined.