The Arklow Pyramid, Wicklow, Ireland Content from the guide to life, the universe and everything 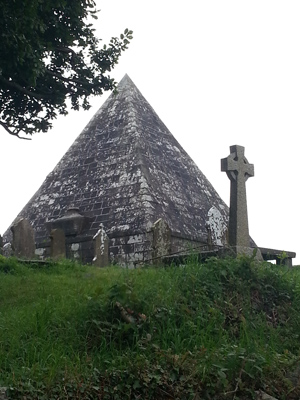 In Kilbride Cemetery, about 2km outside of Arklow in south Wicklow, Ireland, there is a pyramid. It is quite a small one as pyramids go, being only about 30 feet high. On close inspection, it is found to be on a raised square base. This is an 18th-Century tomb.

How to Find the Pyramid

From the M11/N11 road, take exit 20 (Arklow North). Follow the signs towards Arklow. After about 1km, turn right on the road clearly signposted for Avoca and Woodenbridge. Almost immediately take the turn to the left, signposted for the Arklow Business Enterprise Centre. After about another kilometre, there is a series of 'Nissen' huts on the right. Pull in at the space opposite them. The cemetery is on the left side of the road, in front of you.

The tomb was built in the 18th Century by Ralph Howard, Viscount Wicklow. It has a square base which is 27 feet by 27 feet and rises vertically to a height of about six feet. This is topped by a huge pyramid about 24 feet high, making the total height of the monument 30 feet and the slope of the sides equal to 60°. There's a doorway on the north side, which is now bricked up. Records show that inside, there is a 10 foot × 10 foot space surrounded by 33 slots in the wall, each capable of taking a coffin. Only about half of these are occupied.

There's a plaque on the outside of the pyramid with the following inscription: