How to Make a Language Difference - Ms Sheila Michaels Content from the guide to life, the universe and everything 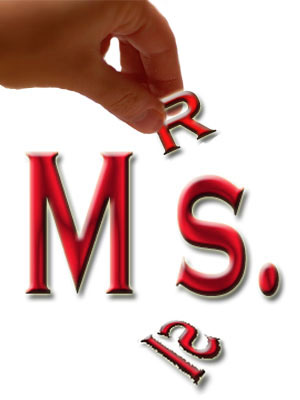 Readers born after 1972 will not understand the following true story.

Before 1972 it was an important point of address etiquette to know whether a woman was married. After 1972, it was not important – at least, in formal correspondence. How did this state of affairs change?

This is the story of Sheila Michaels, and how she changed English-language usage.

The History of an Honorific

Titles such as 'Mr', 'Mrs', 'Monsieur', etc, are called 'honorifics'. These are merely polite courtesy titles, intended to convey good feeling. Manuals of business correspondence spell out the rules, and newspapers' stylesheets ensure uniform usage in a periodical. In the 19th and 20th centuries, these manuals usually prescribed two ways to address an adult woman who was not a member of the nobility: 'Mrs', followed by her husband's surname if she was married, and 'Miss', followed by her father's surname if she was not.

In 1901, a Massachusetts newspaper called The Republican had suggested simplifying everybody's lives by using 'Ms' as a generic form of address for formal correspondence – but it didn't catch on. In the 1940s, linguist Mario Pei had made the same proposal, with equal lack of results. In the early 1950s, office managers' style manuals had proposed the default courtesy title, but got few takers.

One problem appeared to be that nobody knew how to pronounce 'Ms'. True, if you wrote it down, you didn't have to pronounce it. But writing down an honorific you couldn't pronounce gave a letter-writer a funny feeling.

In 1961 Sheila Michaels was a young, committed writer and social crusader. She shared a New York apartment with Mari Hamilton, a fellow member of CORE, the Congress of Racial Equality. The two activists were on a lot of interesting mailing lists. One day, Michaels picked up the mail, and noticed what she thought was a typo on Hamilton's copy of News and Letters. She pointed this out to her friend.

Hamilton replied that no, 'Ms Mari Hamilton' was right, at least according to the radical Marxists of News and Letters. It was a catch-all, non-sexist title. Michaels was delighted. The issue of Miss/Mrs had bothered her for years. Here was the perfect solution. She wanted to take up the cause right away. To her surprise, Hamilton shrugged off the question. After all, there were so many more important issues to work toward.

For the next several years, Michaels fought a losing battle to get people interested in the title change. But in 1968, the women's movement broke out in earnest. Michaels was in Istanbul when she read that feminists had begun a protest outside the Miss America pageant. She cursed. 'They've started the revolution without me!' Then she flew back to New York to join the fray.

In spite of Michaels' urging, few feminists were keen on fighting for the title change. They still felt that other issues took precedence. At meetings of the Southern Conference Education Fund, she was told to shut up. Activists said, 'Nobody wants to hear about Ms.'

However, Michaels was able to make other linguistic changes in the movement. She proposed the term 'feminist', meaning, 'a person, male or female, who believes that women should be socially equal to men'. This was accepted in place of the earlier term, 'women's liberationist'. Another influential Michaels proposal was the adoption of 'sexist' to replace the much more belligerent term of opprobrium, 'male chauvinist pig'. Editors were grateful. Still, there was no energy behind the change to 'Ms'.

Michaels was born in St Louis, Missouri, a city where Northern and Southern US cultures intersect. She had the perfect answer. You pronounce it 'Miz', she announced. And 'Miz' it became.

As it so happened, publisher Gloria Steinem and her friends were just then debating what to call their new feminist magazine. One of them had heard the radio broadcast. 'Why not call it 'Ms'?' she suggested. The rest is history.

In 1971, the idea of 'Ms' as an honorific spread like wildfire across the US. Some pundits made mock, and usage maven William Safire scoffed, but printers paid attention. Soon, most forms offered women the options of 'Mrs', 'Miss' or 'Ms'. In the South, people shrugged: Oh, that's how you spell it.

In 1972, it became official. The US Government Printing Office approved the use of 'Ms' in official documents. That settled it for most people.

Even William Safire had to surrender, eventually. The journalist was stumped when it came to referring to politician Geraldine Ferraro. Ferraro was the woman's maiden name – and her professional one, too. Her husband's name was Zaccaro. Now, she wasn't 'Miss Ferraro', being married. She couldn't be referred to as 'Mrs Ferraro', because she wasn't Mrs Ferraro. And if he called her 'Mrs Zaccaro' nobody would know who he was talking about. He gave up.

Today, the title Ms, pronounced 'Miz', is so common that nobody in the English-speaking world thinks twice about it. It's polite, convenient, neutral, and obviates the necessity for peeking at women's ring fingers. And we have Sheila Michaels to thank for this quick, bloodless revolution.