Emma, Lady Hamilton: The Early Years Content from the guide to life, the universe and everything 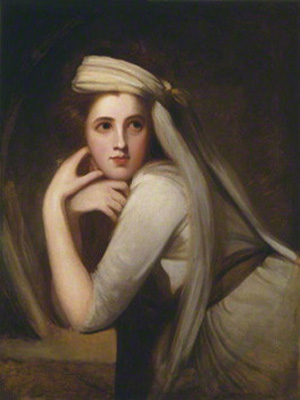 Emma, Lady Hamilton, was one of the most fascinating characters of the 18th Century. She rose from a lowly status as the daughter of a blacksmith and a maid to become the wife of a titled diplomat and the lover of one of the greatest heroes of the British Royal Navy, with many adventures along the way.

The daughter of Henry Lyon and Mary Kidd, Amy Lyon was born in Swan Cottage, Ness, Wirral, in the County of Cheshire, on 26 April, 1765. There was some speculation that she was illegitimate; her mother claimed to have married Henry at Great Neston in June, 1764. As Henry died shortly after his daughter's birth this could possibly have been the cause for the speculation.

Mary returned to her home town of Hawarden, North Wales, where she resumed working as a maid. When the young Amy was 12 years old her mother took her to London where she was put into domestic service in the household of Thomas Linley, a composer.

At the age of 15 years Amy left the Linley household and, changing her name to Emma Hart, moved into the house of a Mrs Kelly, 'a procurer and abbess of a brothel'. Emma then moved on to another establishment with the dubious name of Temple of Health and Hymen, which was run by James Graham. This establishment was an early fertility treatment clinic where Graham gave lectures. He charged couples the princely sum of £50 to spend the night in his 'Great Celestial State Bed', where he claimed 'perfect babies could be created'! Emma worked as one of the 'Celestial Attendants'.

Emma became enamoured with Sir Harry Fetherstonehaugh and began an affair that was doomed as soon as she fell pregnant in 1781. Sir Harry abandoned her shortly before their daughter – given the name Emma Carew – was born. The child was despatched to relatives in Wales. Soon after Emma Hart was taken into the 'care' of the Hon. Charles Greville. Greville set up a home at 10 Edgware Road, Paddington for a Mrs Emma Hart, where she openly became his mistress. Her mother, now known as Mrs Mary Cadogan, also moved into the house.

Always looking for a means to make money, in 1782 Greville introduced Emma to the artist George Romney with a view to exploiting Emma's beauty in a commercial deal. She became the artist's muse for the next four years.

Originally Emma would attend Romney's studio where she posed for numerous portraits, ranging from religious icons to dramatic heroines taken from various pieces of literature. It is thought she also collaborated with the artist as to what 'role' she would play and gave advice on how she should be portrayed.

She also sat for Reynolds, Gavin Lawrence and several other artists, who tended to portray Emma as strong historical characters which seemed to crush the natural sensuality Romney was able to bring to his portraits.

There is a note in Romney's 1786 diary which shows that he is now attending on 'Mrs Hart' at her Paddington Green home. This brings Emma into a more respectable era, with the portraits showing a more demure woman. It may possibly have been an attempt to make her more acceptable to the society, rather than just a mistress.

By 1783, Charles Greville's creditors were beginning to clamour for payment. The commercial venture with Romney had ground to a halt, with many portraits remaining in the artist's studio until sold to other clients to reduce Greville's debt. As much as he loved Emma, Greville needed money urgently. To get the money, he needed a rich wife1 or patron and had set his sights on the heiress the Hon Henrietta Willoughby, but first he had to get rid of Emma – quietly!

Having made contact with his widower uncle, Sir William Hamilton, the renowned vulcanologist and British Ambassador to the Two Sicilies, based in Naples, Greville was hoping the 62-year-old diplomat might take Emma for his mistress. Although Hamilton disapproved of his nephew's plans, he did agree to Emma visiting his home.

Convinced they were to have a 'private' holiday, Emma set out alone for Naples expecting Greville to follow when he'd finished his 'outstanding' business. As the weeks passed, Emma began to pine for her lover; even with her mother for companionship she felt totally isolated. Eventually, Sir William could stand the deceit no longer and told Emma the truth, offering her the use of his home for as long as she wanted to stay.

Emma was grateful to accept Hamilton's gracious offer, and was determined to assist in entertaining the Ambassador's distinguished guests. Again, she began to play her 'attitudes'. Although no longer a lithe slip of a girl, Emma still had an attractiveness which captivated her audience. Goethe, having witnessed one of her performances wrote:

... The performance is like nothing you have ever seen before. With a few scarves and shawls she expressed a variety of wonderful transformations. One pose after another without a break...

As time passed, Emma and Sir William became fond of each other and, despite his greater age, Emma agreed to accept his proposal of marriage. The couple returned to England for Sir William to request the King's permission to marry. On 6 September, 1791, they married at St George's in Hanover Square, London where Emma signed the register with her birth name, Amy Lyon. Due to her husband's title, Emma was now to be known formally as Emma, Lady Hamilton.

Upon their return to Naples, Emma was received into 'society' and presented to the royal court of King Ferdinand IV of Naples. She quickly became a friend and confidante of his wife, Queen Maria Carolina, the sister of Marie Antoinette. The queen had been known to be a sympathiser of the French rebels until the revolutionaries abolished the French monarchy and executed her sister and Louis XVI in 1793. Queen Maria Carolina was a far stronger character than her husband and it was she who pushed King Ferdinand into bringing the Neapolitan and Sicilian armies2 to stand against France.

It was also in 1793 that Emma and Viscount Horatio Nelson were to meet for the very first time. Nelson had arrived in the port of Naples looking for volunteers for the British Navy. He was invited to dine with the Hamiltons for the short period he was in port. It was to be another five years before the pair were to meet again.

Nelson's ship HMS Vanguard docked in Naples on 22 September, 1798. The Hamiltons, having heard of his exploits in St Vincent and the Battle of the Nile, rushed to greet the hero. Emma was greatly shocked at the sight of him. Nelson was prematurely aged, he was blind in his right eye, had lost an arm, and most of his teeth were gone; he was also suffering from a debilitating cough. Escorted to their home, Nelson remained with the Hamiltons as Emma helped to nurse him back to health. Just one week later Emma played hostess to the Neapolitan royal court as a total of 1,800 guests were invited to celebrate Nelson's 40th birthday. In his letters home Nelson began to tell his wife, Fanny, about Lady Hamilton.

As Napoleon's army advanced towards Naples, on 23 December, 1798, Nelson evacuated the Hamiltons and the royal family to Palermo, Sicily. The royal family and court were dismayed as the French army was greeted with open arms by the Neapolitans, which in turn began a revolution in Naples – led by some members of the aristocracy. Queen Maria Carolina feared for her family and turned to Emma for advice, she in turn appealed to Nelson for help. This may have been the turning point in their relationship.

Nelson requested assistance from the British government, which was refused. So, without further support, Nelson did what he could to quell the uprising. Soon the French Army lost interest in Naples and moved further to the north of Italy. The fighting between the Royalists and the Parthenopaean Republic went on for months and, eventually, an army led by Cardinal Ruffo overthrew the rebels and Naples was retrieved. In revenge the queen used Emma's influence to urge Nelson to execute Admiral Caracciolo, one of the leaders of the revolution. The Hamiltons were safely returned to their home in Naples in June 1799.

In April 1800, the Hamiltons joined Nelson aboard the Foudroyant for a cruise of the Mediterranean. It is thought that Emma became pregnant during the cruise. Rumours were circulating around London, and soon the Admiralty could no longer ignore them. They demanded that Nelson return home to explain himself.

Later that month the Hamiltons and Nelson began to make their way home overland and returned to England, eventually landing in Yarmouth, Norfolk on 3 November. Nelson was furious to find his Norfolk home closed up. Fanny had already gone to London to welcome home her husband. It was three days later when the Hamiltons arrived at their home in Grosvenor Square, London.

Nelson joined Fanny at their London home, singing the praises of Mrs Hamilton. Fanny could only watch as her husband grew more distant from her. Soon Nelson was living openly with the Hamiltons in their home.

With thanks to the National Portrait Gallery for permission to reproduce the portrait of Lady Hamilton
1Charles Greville never did marry.2This is known as the First Coalition, which ran from 1793 to 1797.