Pemberton's French Wine Coca and the Birth of Coca-Cola Content from the guide to life, the universe and everything

Americans are the most nervous people in the world...
– John Pemberton, in an 1885 advert for Coca-Cola 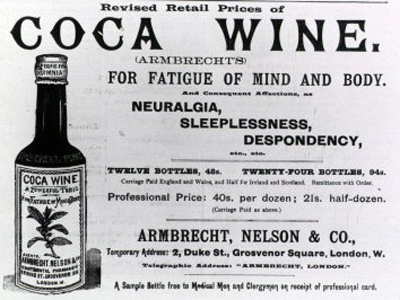 Before there was Coca-Cola, there was Pemberton's French Wine Coca. The 'pause that refreshes' was preceded by the search for a double cure for what ailed the post-bellum South1: morphine addiction and a new disease called 'neurasthenia'. What Dr Pemberton's medicinal drink had to do with curing addiction and nervous conditions is a fascinating story.

To begin with, there was the cocaine craze. In the mid-19th Century, explorers stumbled across tribal people in the Andes who swore by the coca leaf for its properties as a digestive aid, an aphrodisiac and a stimulant. They claimed chewing coca leaves enabled them to work harder, go longer without food, and live longer lives. The president of the British Medical Association, who was 78 at the time, tried coca leaves before climbing Ben Vorlich – and skipping lunch. He became a convert. So did many others, including Sigmund Freud, who touted the substance to friends as a possible cure for morphine addiction. Sadly, neither the BMA nor Dr Freud suspected at the time what we now know: shifting from opiates to cocaine is merely trading addictions. But for a time, coca was all the rage.

Freud himself tried coca in 1884, and the same year wrote a treatise called Über Coca, in which he praised the newly-discovered drug's properties as a painkiller and aphrodisiac. He even wrote to his girlfriend about it, promising her a good time.

In the 1880s, everybody was trying cocaine. It was used in pills, powders, as a substitute for chewing tobacco, in cigarettes and cigars, and as a drink. One drug journal called the craze 'cocamania'.

Angelo Mariani (1838 - 1914) was a French chemist from Corsica. Starting in 1863, he sold a drink mixed from Bordeaux wine and coca-leaf extract as a tonic. The wine, called Vin Mariani, contained .12 grain cocaine per fluid ounce. Used as directed – a 'claret-glass full before or after every meal' – resulted in a daily intake of 18 ounces of the wine, or 2.16 grains cocaine. Users were generally pleased with the results.

Retired Union general and former US President Ulysses S Grant was dying painfully from throat cancer. He had one ambition: to finish his memoires. Mark Twain was helping him to publish this long-awaited work, which would provide for his family's financial security after his death. Friends asked Mariani to visit Grant, which he did. Use of Vin Mariani helped the general to finish his book before he died, and he wrote Mariani a testimonial.

So did many others. The list of satisfied customers included another president, Queen Victoria, and three popes – one of whom, Pope Leo XIII, gave Mariani a gold medal. One wag once asked Mariani why he forgot to get a recommendation from God himself.

Vin Mariani was a very popular drink in its day, although it is almost totally forgotten now. For one thing, it would be illegal almost anywhere in the world. However, in an indirect way, Vin Mariani paved the way for a drink almost everyone on the planet is familiar with: Coca-Cola.

John Stith Pemberton (1831 - 88) was an herbalist, chemist, pharmacist, and an inventor. This Confederate cavalry veteran and sometimes successful druggist had a dream: to leave the world a perfect tonic. To understand what a good tonic should do, in Pemberton's estimation, it is necessary to understand what ailed Southerners after the War Between the States.

For one thing, tens, if not hundreds, of thousands of Confederate veterans were addicted to morphine as a result of their war wounds. Pemberton was well aware of this: he was one of them. His brush with death had come in a cavalry skirmish that occurred after the surrender at Appomattox, one of the last engagements of the war. Along with countless others, he was managing an expensive and debilitating habit. As we have seen, leading medical people leaned toward the opinion that the coca leaf might offer relief for a widespread problem.

The other Southern malaise afflicted mostly women, and as so often happened with women's ailments, it didn't have a name. It was referred to as 'a nervous condition'. Later, it was called 'neurasthenia'. Although abandoned as a diagnosis today, in the second half of the 19th Century neurasthenia was a popular diagnosis for people who were jumpy, had bad digestion, or suffered from unexplained fatigue, headaches, anxiety or depression.

International medical opinion was that Americans suffered more from neurasthenia than other people. Stress might have been a factor – certainly, people in Georgia were stressed after losing a major war, and scrambling to make a living in fast-paced Atlanta or busy Memphis put a strain on the nerves2. As a fashionable diagnosis, neurasthenia was thought to afflict only the most refined and intellectual of people. No matter what the cause of neurasthenia, Pemberton was determined to cure it by coming up with an improved version of Vin Mariani – his Wine Coca.

What was in Pemberton's Wine Coca? Coca, of course, and 'grape wine', but also damiana, a plant from Texas and Mexico that was believed to have aphrodisiac properties. Pemberton's major addition to the formula was the inclusion of cola nuts – a new find from Africa that delivered a strong caffeine punch.

Pemberton's Wine Coca sold well in Atlanta and the surrounding area. Pemberton was making a decent profit on it, when suddenly his business was threatened – by the WCTU, or Women's Christian Temperance Union.

The WCTU had views about alcohol. They did not like it in any form, medicinal or otherwise. According to the WCTU, taverns were the source of all the evil in the United States, from cursing to child molestation. They needed to be closed. The fact that taverns were safe places for working-class men to discuss events and exchange ideas over a glass of beer and a free lunch, and therefore a possible threat to upper-class control, had nothing to do with the issue, of course.

In 1886, Atlanta, Georgia, became the first major US city to 'go dry' by outlawing the sale and consumption of alcoholic beverages. The experiment lasted only two years, but at the time, the looming temperance deadline spelled disaster for John Pemberton. He got to work on a 'temperance drink' – one that would be popular, deliver the drugs he wanted, and be legal under a temperance order.

Pemberton's new 'temperance drink' included coca (yes!), and cola for caffeine, along with citric acid to improve the taste. Pemberton concentrated on the soda fountain market – a lucrative venue back then. Fortunes could be made at five cents the glass.

Temperance didn't last in Atlanta. In 1887, Fulton County went 'wet' again. Temperance didn't even last in the US, when the Volstead Act was passed in 1919, then repealed in the early 1930s. Pemberton didn't live to see Coca-Cola become a success – he sold his rights, which were eventually acquired by Asa Candler, who built the massive industry we know today. Southerners, however, continued to use Coca-Cola – which stopped having any cocaine in it long ago – for its original purpose: to soothe the stomach and calm the nerves. And did so with a clear conscience, as the new product did not contain any alcohol.

If you're curious about the history of Coca-Cola, try For God, Country, and Coca-Cola: The Definitive History of the Great American Soft Drink and the Company That Makes It, by Mark Prendergrast.

The full German text of Sigmund Freud's treatise, Über Coca, is usually available only to subscribers of medical databases, which cost money. Excerpts in English can be read at this webpage, entitled 'Freudian Slips'.

1'Post-bellum' means 'after the war'. For a very long time, 'after the war' in the South meant only one thing: the Civil War, 1861-5. Joke titles such as 'The Late Unpleasantness' merely served to deflect emotion surrounding a catastrophic event.2African Americans in Atlanta might have been even more stressed, as they were victims of prejudice, economic and legal abuse, and the constant threat of violence. However, official medical organisations were unlikely to take notice of minority issues in those days. In New England, Rebecca Lee Crumpler had become the first African American woman to earn her MD (in 1864), but black Georgians wanting a medical education in the 1880s would have to go to the new black colleges in Washington, DC, or Nashville, Tennessee.