Lussekatter: Swedish Buns for St Lucia Content from the guide to life, the universe and everything 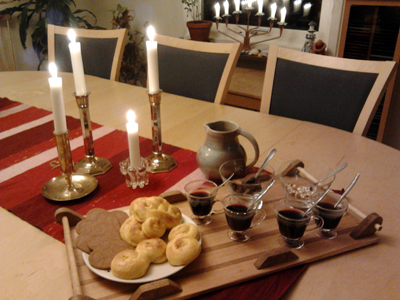 A what? You may ask – and that is indeed a very valid question. The 'Lusse' part allegedly1 comes from a colloquial form of Sancta Lucia, who was a Sicilian saint, and one of the very few saints still celebrated in (mainly Protestant) Sweden. The 'katter' part of the word means cats. Just why they are called cats, is still a mystery. And the real odd thing is that when you combine them into a single word, you mean wheat buns, usually in a curly S-shape, with saffron flavour, and raisins pushed into the bun. Sometimes, they are also called Lussebulle – Lusse-'bun'.

So. Here you have a wheat bun. It's very yellow, and very saffron-y, and a bit sweet. In Sweden this used to be practically the only saffron-flavoured food you could find. A rice pudding on Gotland, oddly named 'pancake', also contains saffron, but not many other dishes. On the rest of the continent, you may associate saffron with the seafood dish Paella, or other hot foods, but not so in Sweden.

The recipe is basically the same as you would use for any other buns, cinnamon rolls or similar, but with a bit of extra butter because saffron tends to make the bread a little dry:

The most important serving of Lussekatter is by Sancta Lucia, who comes early in the morning of the 13 December. She will wear a white gown, a wide red ribbon around her waist, and a crown on her head which has lit candles and usually is decorated with twigs from the Lingon plant. She will bring the Lussekatter and coffee, and often thin gingerbread biscuits. Lucia and her train will sing special songs for the Lucia holiday, and for Advent and Christmas, to the people she visits – while they are still in bed!2

It's also very common to invite some friends for Advent get-togethers, where you serve glögg and Lussekatter, and other holiday sweets. Lussekatt together with hot chocolate (preferably topped with whipped cream) is another favourite. Coming in from a cold day, few things taste better. Or you can make your afternoon coffee break a bit more interesting by adding a Lussekatt.

1Unverified discussions claim that Lusse could be a nickname for Frey or Freya (Den Ljuse – the Fair/Light one), thus linking this celebration to pre-Christian beliefs.2This is a surprise for many of the Nobel Prize winners, who will be treated by a visit from Lucia when in Stockholm to receive the prize.