'The Book Thief' by Markus Zusak Content from the guide to life, the universe and everything 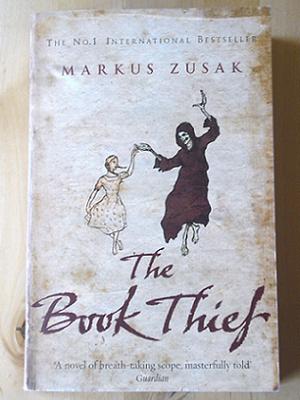 In The Book Thief, Markus Zusak has created a book which may haunt readers, and make them think.  Perhaps its most striking feature is the narrator – Death himself. The story starts in Nazi Germany in 1939, when Death is busy. It follows the fortunes of a young girl, Liesel Meminger, who discovers the redemptive power of books and reading.

The book opens with a stunning prologue, in which Death introduces himself. Death is not cruel; in fact he takes a compassionate view of human life. As he collects the souls of the dying, he concentrates on the colours of the scene, to distract himself from the pain of those left behind. He says:

Personally, I like a chocolate-coloured sky. Dark, dark chocolate. People say it suits me.

Occasionally, he comes across a story that he keeps, one of which is Liesel's. He describes her as:

an expert at being left behind.

Death is an excellent choice for narrator. He knows enough to place the story in its historical context. From time to time, he reminds us how many people are dying. Death sets the tone of the book – although it is a story of a young girl growing up, the presence of Death turns it into a story of survival against the odds.

The characters are subtly developed. Liesel's story starts with her arrival at the house of a foster family in Himmel Street, Molching. Her father has already been taken away, and her mother is too ill to care for her children. It is some time before Liesel learns that her parents suffered because they were communists. When Liesel's brother dies on the way to Molching, Death sees her for the first time. This is also the occasion of her first book theft – she picks up a copy of The Gravedigger's Handbook from the snow.  At first, Liesel is vulnerable. She can't read or write, and has nightmares about her brother's death.

Her transformation over the course of the book is partly due to her foster parents, Hans and Rosa Hubermann. Although Hans is an ordinary painter, and part-time accordionist, he emerges as a man of real moral courage. Hans survived the First World War because of the self-sacrifice of his Jewish friend, Alex Vandenburg. He then makes a promise to Alex's family, which he keeps by hiding Alex's son Max, despite the danger to himself and his family.

Whereas Hans is immediately sympathetic, Rosa Hubermann is less so. She is depicted as often bad tempered, beating Liesel with spoons. Yet she comes to love Liesel and, when Max arrives in the house, she cares for him as best she can.

Max Vandenburg is another important influence on Liesel. Introduced as a Jewish fist-fighter, he is nevertheless a man of sensitivity. Whilst hiding in the Hubermann's basement, he becomes friends with Liesel. He draws and writes two home-made books for her, the second of which, The Word Shaker, dwells on the power of words.

Another subtle characterisation is that of Liesel's friend Rudy. At first, Rudy is presented as a typical young boy, who gets into fights and takes part in expeditions to steal fruit. Nevertheless, he is devoted to Liesel. Later, he demonstrates a brave heart, scattering bread on the route taken by the Jews being marched to Dachau. The scrapes that Liesel, Rudy and their friends get into ensure that the tone of the book doesn't become overwhelmingly dark.

A Question of History

One of the qualities of The Book Thief is that it extends the reader's understanding of others.  Anyone who grew up in post war Britain  will have heard stories of the suffering and courage of British people during the Blitz. These usually depict the Germans as enemies. This book shows us the suffering of ordinary Germans during the war, and features few convinced Nazis.

Markus Zusak1 is recorded as saying,

We have these images of the straight-marching lines of boys and the 'Heil Hitlers' and this idea that everyone in Germany was in it together. But there still were rebellious children and people who didn't follow the rules and people who hid Jews and other people in their basements. So there's another side to Nazi Germany.

However, readers may wonder if the author has painted an accurate picture of Nazi Germany. The book gives the impression that many ordinary Germans didn't much like Hitler but, if this is true, how did he come to power? The book itself offers a possible answer. In his book, The Word Shaker, Max Vandenburg shows Hitler using the power of words to foster hatred, while Max and Liesel use them for friendship. Whether this is a sufficient answer is another matter.

The Book Thief was originally published in 2005 as an adult novel. It was republished in America in 2006 as a children's book, and reached number one on the New York Times bestseller list. It deserves its bestseller status, with its subtle characterisations, poetic descriptions, and the juxtaposition of everyday events with the epic background of the war.