Learning to Paraglide Content from the guide to life, the universe and everything 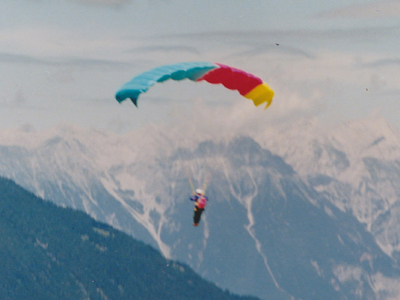 Paragliding is the sport of flying a foot-launched, unpowered wing that has no rigid structure. Where possible, pilots typically launch from the side of hills or coastal cliffs or ridges. Where no such natural structures are available, it's possible to be winched into the air.

What it is Not

Paragliders should not be confused with other similar looking devices. They are not parachutes. Parachutes are designed to deliver you to the ground safely; paragliders are intended to keep you off the ground for as long as possible.

Paraglider pilots do not "jump off cliffs". People who do that are called BASE jumpers, BASE possibly standing for Brain Apparently Somewhere Else1. BASE jumpers have their cloth packed when they jump and only find out whether they packed it properly after they've entered freefall. Paraglider pilots take the time to unpack their wing while they're still on the ground and make sure it's in an airworthy condition before they trust their life to it.

A relatively new and increasingly popular offshoot of the sport of paragliding is speedriding/speedflying - the use of smaller paraglider-style wings to perform a fast, gliding descent from a mountain, launched either on foot or on skis.

The nearest equivalent to paragliding is hang-gliding, where the pilot also launches on foot from a hillside or tow. Hang-gliders have a rigid delta-wing structure and the pilot flies in a prone (face down) position. They are larger, heavier, more expensive and more difficult and time-consuming to prepare for flight than a paraglider. They do have a better glide performance and can fly in stronger conditions. Most people who've done both say hang-gliding is the superior flying experience, although nowadays they usually say this while sitting on a hill with their paraglider when it's too windy to launch...

Paragliding is one of the purest forms of flight imaginable. From a comfortable, natural sitting position the pilot has all round visibility, complete control with simple, intuitive inputs, and no engine noise. Your fully functional aircraft will fit on the passenger seat of your car or the back of your motorbike, can be lifted with one hand, launched (with the landowner's permission) from any suitable hill, flown a hundred miles or more and landed safely in an area the size of a tennis court.

Paragliding requires a certain minimum degree of physical fitness, although just how much varies. As a beginner, you will likely fly a wing that is constructed to stand up to the kind of abuse a beginner will inflict on it, slamming it repeatedly into the ground while ground handling, and dragging it around on launch. Wings that will put up with this are constructed robustly, which is to say, they're heavier.

Furthermore, as a beginner, you will be doing everything the hard way. Ground handling will be tiring. When flying, you'll likely be physically tense. And when packing and unpacking you'll probably do quite a few things several times. Also, as a beginner, flying will consist of repeatedly walking up a hill, flying down, then walking back up again.

However, once you've become more skilled, the sport will get much, much easier. You'll buy a lighter wing, and a lighter harness. You'll unpack it and lay it out once, and it'll stay where you put it. Ground handling will be instinctive and subtle instead of brute force and physical. In flight, you'll be relaxed and attentive, rather than tense. And most significantly, when you land, it will either be back on top where you took off, or next to your car. If you are fortunate enough to live near a site that doesn't require you to walk up a hill, either because you can drive to the top or because there's a ski lift or similar, the requirement for physical fitness really can be quite minimal.

How not to Learn

One cannot simply get into a light aircraft and fly it - to do so would be to break laws, even if one were able to take off, fly and land without incident.

However, there is no legal impediment to a complete novice buying a paraglider on the internet, finding a hill with a cooperative landowner, and simply trying to teach themselves to fly. This is of course how the pioneers of paragliding were forced to learn, there being no alternative. However, quite a few of those pioneers are, as a result, dead. The man (and it usually is a man) who attempts to teach himself to paraglide has a fool for a student.

One of the problems with the sport is that it looks, to the uninitiated, extremely easy. There are only two controls - how hard can it be? And indeed, if they manage by blind luck to find a benign site on a good day, a self-teacher may find themselves able to inflate and launch the wing, take off, fly and land without incident. They may even find it easy. They may repeat the process on other days, at other sites, and believe themselves able to fly. And then, one day, something they had not considered - and of course, never been taught about - will arise as a factor in their day. And they may be crippled or killed.

Paragliding is easy. Really, it is easy. Even for the experienced pilot, there is relatively little that you actually need to know, compared to other forms of aviation. We don't use airband2 radios, so no need for a licence in that or learning the lingo. We don't have engines, so no inspections of those or maintenance. We're only allowed to fly where and when we can see, so there's no need to learn how to use complicated instruments. We're generally not allowed in controlled airspace, so all we really need to learn about that is where it is and how to stay out of it. That, and the fact that the gliders themselves are quite easy and intuitive to control (and getting easier and safer every year) means anyone with a bit of common sense can learn to paraglide.

Find your local controlling body's website. They'll have a contact for your local clubs and schools. You need a school first, until you're qualified. Once you've got the certificate that says you're safe to fly with others, unsupervised, then you can join a club and go flying whenever and wherever you like.

The things you learn can be broken down into:

Theory of flight covers all the stuff about why your glider works at all, and how it works. In particular, it will teach you things that apply specifically to unpowered flight, such as the concept and importance of the polar curve, which describes how fast your glider sinks at different speeds. Certification in most places requires you to pass a written test on the basic concepts of this stuff.

Meteorology may seem dull, even to the British who are culturally obsessed with talking about the weather. If you're going to get seriously into paragliding, you need to be prepared to take that obsession to a whole new level. As a keen pilot, your life will rapidly begin to revolve around the forecasts. You will learn how the weather actually works, the symbols on synoptic charts will start to make sense, and you will amass a collection of invaluable bookmarks on your web browser for the sites you find most reliable. Certification will also require you to pass a short written test on meteorology.

Air law is mainly concerned with the safe administration of your flight, ensuring that you don't cause yourself or anyone else inconvenience or damage. Most of what you will learn is where and when you are not permitted to fly. All levels of pilot qualification require you to pass a written examination in air law, and it is the most stringent part of the certification.

And you will of course learn the physical skills of handling the glider. You will do a lot of 'ground handling' - messing around with your feet firmly on the ground, inflating, launching, controlling, steering and landing the glider without ever flying yourself. This is an extremely important skill to master, and it's impossible to overstate the value of lots of ground handling practice. If you can handle a glider confidently on the ground, you will handle it better in the air. If you rush to get into the air every time and neglect your skills, you'll never fly as well as you might.

A common dilemma faced by the newly-qualified, fresh-faced and keen pilot is - what now? You've got your ticket to fly, and you're sitting on a hill with no instructor to tell you what to do. Do you fly? If you do, what do you do? And what COULD you do?

In the first instance, you're ripe for some coaching. Most clubs have coaches who are keen pilots who've done a course to help them pass on their skills. They're not instructors, and if you're not qualified they can't help you. But if you are, they're a mine of information.

What you do next depends on your aspirations. Some people just want to turn up to the hill with their gear and have a chat and a cigarette to get out of the house, and if they fly it's a bonus. Some people are happy boating up and down a ridge3 for a while, landing by their car and going to the pub. Flying doesn't have to be an adrenaline sport.

For some, the next step is to strap on an engine and fly in places they could never reach unpowered. Others seek to exploit thermals, convergence or wave lift (or all three) to take their unpowered wings as far as possible away from launch before landing in some remote field and wondering how long it will take to hitchhike back to the car. Some push wing performance to its limits with acro flying, looping and tumbling the glider in ways to make the average pilot feel queasy. An increasingly popular recent development is speedflying - using smaller paragliders not to stay up in the air, but rather to descend quickly and excitingly from the tops of mountains.

Any and all of these experiences can now also be shared with friends and social media by using increasingly cheap and lightweight video cameras. These can be mounted on the pilot's helmet, chest or boots, waved around on a pole, or even fitted to the wing itself for a different perspective. Fiddling about with video cameras is probably best left until after the rest of the flying experience has become second nature.

It's very hard to avoid the cliché, so why bother? The sky is the limit.

1But actually an acronym that stands for the four categories of objects from which one can jump: Buildings, Antennas, Spans (bridges), and Earth (cliffs).2A section of the VHF radio spectrum used for civil aviation radio communication.3Ridge lift is caused by a long edge of hillside getting in the way of a steady flow of air. When the air stream reaches the hillside, there's nowhere to go but up. One can then fly quite happily above the ridge, supported by all that rising air.
– quoted from H2G2 Entry A325748 - Gliding.