The Varied Carols of Henry Clay Work Content from the guide to life, the universe and everything 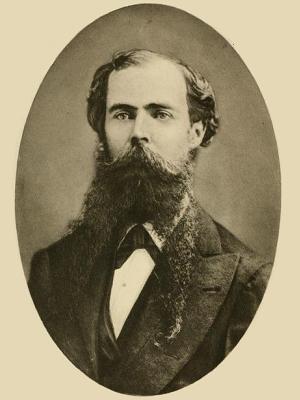 Know the songs of a country, and you will know its history...1

I hear America singing; the varied carols I hear...2

Pop music: it forms part of the rhythm of our lives. We hear it on the clock radio as we rise. We warble it in the shower. It plays in our cars, on our iPods, in the supermarket, the mall, the lift. It is hard to escape from the songs of our time and country. As Bertram Work said, '... the true feeling of a people speaks through what they sing.' What our most popular songs tell us about ourselves is a question for another day: but what about that other country, the past? What do we know about the inhabitants of the 19th Century from listening to their most popular songs?

Well, for one thing, they liked catchy tunes. The ones that follow were mostly toe-tappers. We can listen along cheerfully – as long as nobody remembers the words.

Keep in mind: each of the songs discussed below was wildly popular. Some sold more than a million copies of sheet music. That's platinum. No matter how much the lyrics make us cringe today, it is true: if we know these songs, we know something more about history. (We might wish we didn't.) And each of these songs was written by that very popular songwriter – the Paul McCartney3 of his day – Mr Henry Clay Work of Connecticut. The man who gave us the expression 'grandfather clock'.

Strange how potent cheap music is 4.

Henry Clay Work came of respectable Scots stock. His father, Alan Work, was an ardent abolitionist who went to jail for his activities as a conductor on the Underground Railroad. The elder Work is said to have helped almost 4,000 people get to freedom from slavery. Henry was brought up in a household with the most liberal views.

Henry was a self-taught musician. While working as a typesetter for a Chicago music publisher, he composed songs in his head, using the rhythm of the presses as a sort of backbeat. His first hit, 'We Are Coming, Sister Mary', was published in 1853 and became a Christy Minstrels hit – the equivalent of having your song recorded by Elvis.

Work became a popular and successful songwriter. Although he had the usual copyright problems – over the years, others claimed to have written his songs – his music publishers always sorted them out. Over his career, Work published at least 73 popular songs. He died in 1884, relatively young, leaving a considerable musical legacy.

During the Civil War, Work was inspired to write music that supported the efforts of the Union Army to end the rebellion and to free enslaved people. His first big hit in this direction was 'Kingdom Coming'. Even before the Emancipation Proclamation of 1863, Work was imagining the slaveholders on the run and the formerly enslaved people at large and in charge on the plantation. This was heady stuff, and really caught on. The song sold a million copies.

One assumes that most of the people who bought this song:

It was asserted that Work 'learned' this dialect from the refugees his father helped escape. This is possibly true. Mark Twain once commented on reading Bret Harte that he could tell from Harte's use of language that he had never been a miner, as Twain had. The same thing can be said of the 'dialect' in Work's songs.

In addition to the gleeful 'Kingdom Coming', Work added to the US patriotic corpus by penning 'Marching Through Georgia'. Work wasn't with Sherman, of course, or he might have been less prone to sing cheerfully about a scorched-earth operation. Be that as it may, the song was a runaway success.

A linguistic note: in Work's song, people are referred to as 'darkies'. This was not generally considered to be an offensive way to describe another person at the time, although it is a reason why the lyrics are almost never sung in public today. In a later verse, Work jokes that 'massa' has become so tanned from drilling with his troops that he will be able to pass himself off as 'contraband'. 'Contraband' is the term used by Union troops to refer to runaway slaves who followed the army. The moral? Even if your heart's in the right place, your terminology may not be.

Funny Foreigners and the Amusingly Ignorant

So what made a song popular back in the 1860s? To judge from the sheet music sales, dialect would be one answer. Language-murdering foreigners and ignorant people like the malaprop-prone Irish mother above seemed to tickle everybody's funny bones.

Take 'Corporal Schnapps'. (Please.) The corporal, like many a German immigrant, was off to war, possibly following General Franz Sigel. He did it for the love of a girl, who of course runs off with the next German who's too clever to enlist:

The Germans, the Irish, the 'darkies': imitations of 'funny' accents just wowed them in the music halls.

When he wasn't exhorting men to go to battle, Work was exhorting them to stop drinking. He wrote one of the most famous temperance songs in history. Who could hear this affecting song without putting down the beerright now?

Father, dear father, come home with me now,
The clock in the steeple strikes one;
You said you were coming right home from the shop
As soon as your day's work was done;
Our fire has gone out, our house is all dark,
And mother's been watching since tea,
With poor brother Benny so sick in her arms.8

As you may have guessed, little Benny is dead by the time the song ends. The 19th Century ran to musical morbidity not unlike the songs recorded by Bobby Goldsboro.

Of all his accomplishments, one of which Henry Clay Work might have been proudest was the fact that he popularised the term 'grandfather clock'. That clock used to be called simply a 'longcase clock'. Not only was Work's song about it another platinum hit, but it caused people to refer to the clocks as grandfather clocks. (The smaller longcase clock became a 'grandmother clock'.) The song also inspired urban legends about the 'inspiration' for the song.

My grandfather's clock
Was too large for the shelf,
So it stood ninety years on the floor;
It was taller by half
Than the old man himself,
Though it weighed not a pennyweight more.
It was bought on the morn
Of the day that he was born,
And was always his treasure and pride;
But it stopped short
Never to go again,
When the old man died.9

Chances are, you've heard this song somewhere. The tune is catchy, like all Work songs. Unlike most of his lyrics, this one manages not to be sexist, racist, ethnocentric, or socially retrograde. Anthropomorphising inanimate objects – writing, for instance, the 'life story' of a coin – was a popular conceit back in the day, and it seems to have served the composer well. In Britain, 'Grandfather's Clock' is even used to sing children to sleep.

Gone But Not Forgotten

The past is never dead. It's not even past10.

What have we learned? Music, indeed – especially popular music – both focuses and defines an era. Who can remember an event from their teens without a mental musical soundtrack? Tell us what song was playing at your school dance, and we will tell you exactly how old you are. And what country you come from.

Music never really goes away. The pop tunes of the past come back to haunt us   –   this summer's ice cream wagon may be calling little kids with the tune that set the grownups dancing back in 1860.

Musical taste is one of the many, many things that divide us from our forebears. We listen, we roll our eyes. Someday, guaranteed, somebody will be listening to our favourite hit...