Predicting the Future - John Elfreth Watkins' Brave New World Content from the guide to life, the universe and everything 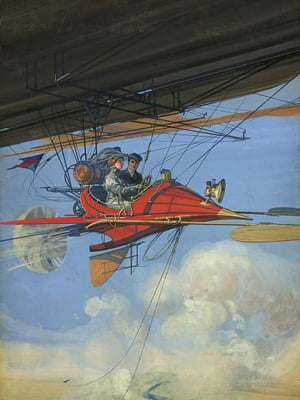 What happens when you reach the end of your history book? Some wag of an author usually reminds you that you've come to 'the end of history'. After that, he is sure to point out, it's up to you: you're making history now. You roll your eyes and move on to the latest thing on Twitter, but as you do, you might think to yourself, 'What technological and social changes will my children/grandchildren be reading about in 50-100 years' time?'.

Back in 1900, a civil engineer and museum curator named John Elfreth Watkins looked forward into the unwritten history of his civilisation. He made some startling predictions. Many of them came true. We might be less interested in what he got right – and wrong – than in wondering why he was thinking about the things he predicted.

As the man said, 'The past is a foreign country. They do things differently there1.' This is true of the US in 1900, which was Progressive with a capital 'P'. Progressivism was even the name of a political movement. Just about everyone was interested in Progress, from the 'sewer socialists' of Milwaukee who wanted to clean up the infrastructure, to muckraking journalists who exposed vice and corruption in government and industry, to industrialists who wanted the machinery to hum. The country was only a few years out of the Long Depression (1873-1896), and people who finally had money to spend were interested in new goods, new experiences, and new pleasures.

They believed, too, that when it came to Progress, the sky was the limit. Nourished on the rags-to-riches novels of Horatio Alger, and accustomed to announcements of breakthroughs in technology from the likes of Thomas Edison and Nikola Tesla, the citizens of the nation of 1900 looked forward to new wonders in the century to come. So when Mr John Elfreth Watkins, longtime Curator of Mechanical Technology at the Smithsonian, ventured an article in Ladies' Home Journal in December of that year, readers were quite ready to pay ten cents to learn about a bright and prosperous future.

Surprisingly, most of Watkins' predictions came true in some form.

The American will be taller by one to two inches.

Yes, people were shorter then, no matter how much this pains the historian. It turns out Watkins was right – people in the US are one to two inches taller than their predecessors.

Gymnastics will begin in the nursery, where toys and games will be designed to strengthen the muscles. Exercise will be compulsory in the schools.

This man predicted the fitness craze (though not Richard Simmons). He thought we would be better at it, though. He predicted that in 100 years, everyone would walk ten miles at a stretch – not that people would drive for half an hour to find a parking spot close to the gym entrance.

Automobiles will be cheaper than horses are today. Farmers will own automobile hay-wagons, automobile truck-wagons, plows, harrows and hay-rakes. A one-pound motor in one of these vehicles will do the work of a pair of horses or more. Children will ride in automobile sleighs in winter. Automobiles will have been substituted for every horse vehicle now known.

We haven't priced any horses recently, but our sage correctly predicted the automobilisation of modern society2. Considering that a horse requires more careful upkeep than even the fussiest car, and that an automobile has quite a few 'horses' under its hood, Watkins was spot on.

There will be air-ships... They will be maintained as deadly war-vessels by all military nations.

To England in Two Days. Fast electric ships, crossing the ocean at more than a mile a minute, will go from New York to Liverpool in two days. The bodies of these ships will be built above the waves. They will be supported upon runners, somewhat like those of the sleigh.

Is Watkins' hovercraft full of superfast eels? Actually, this is an uncannily accurate description of a hydrofoil, a ship mounted on wing-like fins that reduce hull drag. Hydrofoils don't cross the Atlantic, because they don't play well with waves, but they are great at crossing large European lakes.

Photographs will be telegraphed from any distance.

Man will See Around the World. Persons and things of all kinds will be brought within focus of cameras connected electrically with screens at opposite ends of circuits, thousands of miles at a span. American audiences in their theatres will view upon huge curtains before them the coronations of kings in Europe or the progress of battles in the Orient. The instrument bringing these distant scenes to the very doors of people will be connected with a giant telephone apparatus transmitting each incidental sound in its appropriate place. Thus the guns of a distant battle will be heard to boom when seen to blaze, and thus the lips of a remote actor or singer will be heard to utter words or music when seen to move.

This is worth quoting in its entirety, not only because it is such an accurate prediction of television and cinema, but because it is so cool. Watkins was really perceptive in thinking that war coverage and Royal Events would be high-ratings items.

Telephones Around the World. Grand Opera will be telephoned to private homes...

No, no, do not want! Wait, he was just talking about the revolution in recorded music. We don't know what Watkins would have said about Rebecca Black3 on his iPad.

Watkins was thinking of pneumatic tubes, but his ideas presaged the worldwide revolution in computerised buying and container shipping.

Ready-cooked meals will be bought from establishments similar to our bakeries of today.

Peas as Large as Beets...

No Foods will be Exposed...

Strawberries as Large as Apples...

Oranges will grow in Philadelphia...

Watkins predicts serious advances in agricultural techniques. A modern prognosticator might not be so keen on growing things, but in 1900, many more Americans were farmers. They had a vested interest. That went for food protection, as well – a major concern back then.

Coal will not be used for heating or cooking.

Watkins was in favour of hydroelectric power (he didn't dream of nuclear).

Hot and Cold Air from Spigots.

Microscopes will lay bare the vital organs, through the living flesh, of men and animals. The living body will to all medical purposes be transparent. Not only will it be possible for a physician to actually see a living, throbbing heart inside the chest, but he will be able to magnify and photograph any part of it. This work will be done with rays of invisible light.

Well-predicted. Watkins didn't point out how much an MRI would cost though.

He was a bit high, but the population certainly grew amazingly fast. Watkins predicted a growth of 4.5 times over the 1900 population of 76 million. The actual growth was 3.5 times, to a population of 272 million.

There Will Be No Street Cars in Our Large Cities. All hurry traffic will be below or high above ground when brought within city limits.

A mixed prediction: Although there are still street cars in some US cities, they were often phased out and then brought back. The end of this prediction is an epic fail, though: 'Cities, therefore, will be free from all noises.' (see the film Noise, Mr Watkins forgot to predict the car alarm).

Mosquitoes, house-flies and roaches will have been practically exterminated.

Sad to say, this has not yet been accomplished. But Watkins might have been cheered by the high-tech techniques used by the Orkin people.

There will be No C, X or Q in our every-day alphabet…

No, Mr Watkins, spelling reform hasn't happened in English yet. He also predicted that Russian would be the second most popular language on the planet.

A university education will be free to every man and woman.

Don't we wish. In the US, a university education was never free, as it was for a time in other countries, although low-cost options and scholarships have been available. It is also a shame that the rest of this prediction never came true: 'Etiquette and housekeeping will be important studies in the public schools.'

There will be no wild animals except in menageries. Rats and mice will have been exterminated.

See 'Orkin'. However, the sad note about species extinction is that Watkins didn't seem to think it was a bad thing.

As we look back over the last 112 years, we realise that through all the horror, fear, and suffering of the 20th Century, there was, indeed, enormous technological and social progress – enough to gratify far-seers like John Elfreth Watkins. What will the next century be like, we wonder? If we cast our imaginations farther into the distant country which we ourselves will be unlikely to see, what do we predict for our progeny?

Is 'everybody will be travelling by Segway' really the best we can do?

1The quote about the past comes from the opening sentence of HP Hartley's The Go-Between (1953). 1953 was definitely a different country.2And skidoos it appears.3A singer who received worldwide internet fame in 2011 as a 'viral star'.