Hard Astarboard - a Titanic Controversy Content from the guide to life, the universe and everything 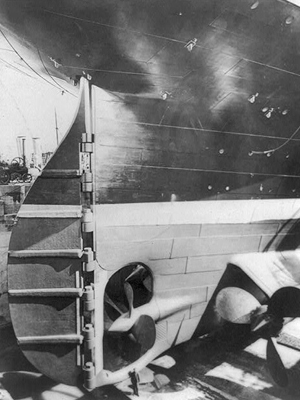 At about 11:40pm on 14 April, 1912, a huge passenger liner was crossing the Atlantic Ocean, making 22½ knots (26 mph, 42 km/h). The serenity of the bridge was shattered when the lookout rang 3 bells and reported 'Iceberg right ahead!' (This is not an entry on the RMS Titanic, but only the few moments that followed the lookout's warning.)

First Officer Murdoch, who was the Officer of the Deck, issued the order 'Hard astarboard'1, and he rang the Engine room to 'stop' and then 'full astern'. The helmsman spun the wheel anticlockwise as fast as possible and the ship turned ponderously to port. She had turned about 22½° before a spur of the ice raked a 300-foot (90-metre) scar into the ship's starboard side. In less than 3 hours, the ship would sink and two thirds of those on board would not survive. The question that is often asked is why did the ship turn to port when the order was 'Hard astarboard'? Here is the explanation.

In the early days of sailing, the rudder, or 'steering board' that steers the ship, was placed on the side of the vessel near the rear. Over time it was decided that the rudder should be placed on the right hand side and almost all ships were built this way. To protect the fragile rudder when the ship was brought alongside a pier or quay the left side would be placed against the structure. A gang plank or 'loading board' would be placed between the ship and the port. When facing forward, the right hand side became known as starboard and the left hand side larboard.

When steam propulsion was introduced to the navies in the 1840s the term larboard was officially replaced with the word port to avoid the confusion of words that sounded so similar.

So why can't sailors just say 'right' or 'left'?

Port and starboard refer specifically to the sides of the ship, or boat. Have you ever noticed two people facing each other when told to go to the right? One will ask 'your right or my right?' Sailors working a ship are faced in several different directions; port and starboard eliminate the confusion. Picture a large rowing boat with all the oarsmen facing the rear so they can pull with their backs, and the person steering and giving orders facing forward. Any instruction to the port or starboard oars can be understood by all without confusion.

In the Middle Ages, ship design advanced and shipbuilders found the rudder would be much more efficient if it was mounted to the stern post on the centre-line of the ship. The terms starboard and larboard remained. The early ships were steered with a long bar mounted through the top of the rudder. Because the bar extends past the pivot point of the rudder, pulling the tiller to starboard forces the rudder to port (larboard) and turns the ship to the port side. Even today many small sailboats and outboard motors are steered by a tiller.

As ships grew bigger, a more efficient means of controlling the rudder was needed. In the 15th Century, a second vertical lever called the whip-staff was added. Pushing the whip-staff to port would pull the tiller to starboard and force the rudder to port, turning the ship to port. By the 19th Century, almost all ships were steered by a wheel linked to the tiller by ropes. By crossing or not crossing the ropes, the wheel could be turned either way to turn the rudder. The standard was to set the wheel to turn in the same direction the ship was to turn.

How were steering orders given 100 years ago? The following quote from a textbook goes a long way to explain how it was done:

'Conning is the art of directing the helms-man to steer the ship on her proper course by compass or by the wind; the person who performs this duty is generally the quarter-master or pilot. When steering by compass or landmarks, and it is desirable that the vessel's bows should go to the left, or to port, the order is given Starboard! Whereupon the helmsman turns the spokes of the wheel over to port, or in the same direction the ship's head is to go, and this according to the usual method of arranging the steering gear, has the effect of sending the tiller to starboard, and consequently of presenting the port side of the rudder to the action of the water.'
– SB Luce, Lieut-Commander, USN Newport, RI (1863), Seamanship: Compiled from Various Authorities and Illustrated with numerous Original and Selected Designs, For the Use of the United States Naval Academy2

When did the Orders Change?

Following World War I, a series of International Shipping Conferences were held to standardise the rules of navigation. In 1928, recommendation number 41 stated that the old 'tiller orders' be abandoned and replaced with the actual direction the ship should be turned. This was adopted in Britain in 1933 and the United States in 1935. The confusion that followed led to the almost universal system of 'rudder orders'. The old 'hard astarboard' became 'left full rudder' and to turn the vessel to starboard became 'right standard rudder'.

Back to the Titanic

After the disaster, inquiries were held in both the United States and Great Britain. Among the witnesses was the helmsman who was at the wheel at the time of the accident, Robert Hichens, who had survived. He gave a detailed account of the orders and actions on the bridge from the time he came on watch at 8.00pm until he was ordered to help getting out the boats. Some of the confusion after the sinking was that First Officer Murdoch was heard telling Captain Smith:

I put her hard astarboard and run the engines full astern, but it was too close; she hit it before I could do any more. I intended to port around it.

This is why the Titanic turned to port when the command 'Hard astarboard' was given.

1This order is often misquoted as 'Hard to starboard' which seems to be more grammatically correct. The prefix 'a' comes from Old English meaning on or to, as in the phrases 'to look ahead' and 'to be taken aback'. This prefix is still used in many nautical terms such as 'abeam' or 'astern'.2Available online at Google Books.