Odiham Castle, Hampshire, England, UK Content from the guide to life, the universe and everything 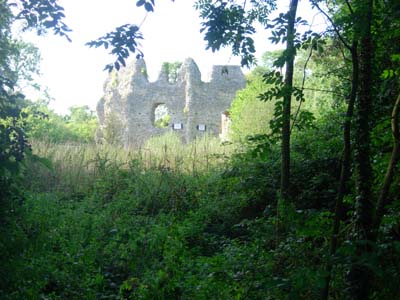 Odiham Castle1 is described as a small 13th-Century ruin on the banks of the River Whitewater near Odiham in Hampshire. The castle, known as King John's Castle, is an example of a fortification known as a shell keep. This type of fortification was a direct development of the Norman motte and bailey, replacing the original timber walls with stone. Many of the walls were strengthened even further by the building of gatehouses, towers and buttresses. Carisbrooke on the Isle of Wight is another excellent example.

Odiham Castle, however, was of a much more sophisticated design, and represents the final stage in the development of the shell keep. Built on a slightly elevated site with the north and western approaches protected by a loop of the river Whitewater2, the castle lies approximately 500 metres west of the canal bridge at North Warnborough. The original river crossing that the castle guarded was the ford situated near Castle Mill House. What stands today are the remains of the octagonal shell keep.

The castle walls surrounded an inner courtyard that was accessed by a fortified gate in the eastern side. There were originally bank and ditch defences and an inner and outer moat surrounding the keep with a palisade between the two3, but only archaeological evidence remains of these features. The defences were mentioned in an account of an action that was recorded in 1322, when Robert le Ewer attempted to take the castle.

Although King John had 90 royal castles, Odiham is one of only three built during his reign. The 20 acre site was part of the royal estate with palace and lodgings from the time of the first Saxon Kings up until the reign of King Harold, in 1066. By 1086, Odiham had been declared a royal burgh, and construction of the castle was begun in 1207.

Records indicate that by 1214 the castle was complete, however, excavations indicate that a domus regis or 'King's House' was the first building on the site4. The keep that stands today was not the same building that withstood the 1216 siege. The damage to the castle sustained during the siege was not repaired and it resulted in the construction of the later, much stronger fortress. As John was king from 6 April, 1199, until 19 October, 1216, it would appear that he never stayed in the castle that we see today. There are, however, 12 recorded visits to Odiham by King John between 1207 and 1216.

Odiham was said to be King John's favourite residence and as such it was a substantial building; it played its part in the most important days of his reign. It was at Odiham that the royal party spent the night, prior to travelling to Runneymede to sign the Magna Carta on 15 June, 1215. By the standards of the day it would have been an extremely comfortable residence.

On 21 May, 1215 , a French army landed at Stanhope and Louis Dauphin of France, son of Louis VIII of France (later to become Louis IX), landed at Sandwich and marched to London. The French had previously taken John's French lands, and now it looked like it was time to continue their successful campaign. John and his troops fell back to Winchester, then moved on to Windsor just before the Dauphin laid siege to the city. In October of that year Dover fell to the French forces and a French army of 35,000 held London and the Home Counties where they would remain for almost a year. The French army also took John's favourite castle at Odiham in Hampshire in July 1216 after a siege lasting 15 days. These facts indicate that Odiham must have been a fairly substantial fortification, as it was held by just three knights and ten sergeants. The castle was overrun and captured, but the French army accepted the surrender of the garrison and allowed the knights and band of troops the honour of leaving with their horses and armour. This was a mark of respect only granted to gallant and worthy enemies.

In November 1322, Robert le Ewer, the Constable of Odiham Castle, rebelled against Edward II; the cause of the rebellion was the rise to power of the Despenser family. Robert was declared an outlaw and the custody of the castle placed in the care of John St John of Basing and of Ralph de Camoys. In an attempt to retake the castle, Robert and his supporters mounted a serious assault. The assault failed despite causing some damage to the fabric of the castle and the attackers were forced to retreat. Robert escaped, but was captured in Southampton in December 1322. He was later placed in chains and died in prison due to deliberate neglect.

During excavations on the site, some round stones were found in the backfilled moat. These have been identified as shot for siege weapons, probably a catapult or light trebuchet. It has been speculated that these date from the time of the siege of 1322.

In the period 1325 to 1326, the castle played a small part in the 'Despenser's Rebellion' as it was part of the holdings of the rebel, Hugh Despenser, 1st Lord Despenser, also known as Hugh Despenser the Younger. Amongst his many titles was 'Constable of Odiham Castle'. Hugh Despenser was also Lord Chancellor and Warden of both Portchester Castle Hampshire and Hanley Castle in Worcestershire. He also held further wardenships of other castles in Bristol, the West Country and Wales. This rebellion was a political move against Roger Mortimer and Queen Isabella of France, the wife of Edward II. Ultimately, this cost Hugh his life as he was executed for his misdeeds on the 24th November, 1326. 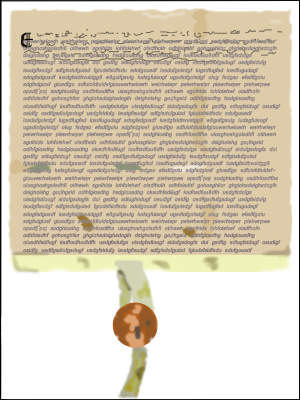 During the 14th Century, Odiham castle was the venue for a sitting of Parliament.

David Bruce5, King of Scots, was held at Odiham after being taken in battle by the English in the Battle of Neville's Cross in October 1346. It took 11 years to raise the ransom of 100,000 Marks. King David's fate is recorded by Shakespeare in his play Henry V6.

By the 15th Century, the castle had lost its status as a royal residence and became a hunting lodge. During the following 200 years, little was spent on the upkeep of the building; in fact, much of the valuable castle stone was incorporated into local buildings and by 1603 the castle was described as a ruin.

Sadly, the castle is in extremely poor condition because of its neglect since the 1500s, although even as a ruin it is still impressive. If you happen to visit, and it is recommended that you should, you will find a site that evokes both the power and majesty of kings and also a reflection of their folly. Hampshire county council purchased the castle site in 1977 and redeveloped the whole area. The council have done an excellent job of presenting the site to their visitors, and it is a perfect place for a summer picnic. There is good car parking and the venue is ideal for a relaxing destination.

Odiham, a Place in History

Odiham is recorded in the Doomsday Book as a pre-Conquest royal estate. After the Conquest it was retained as one of the Crown's properties. It remained as a hunting lodge until King John built the castle on the site, between the years 1207 and 1214. Odiham was only in the spotlight of history for around 200 years; the rest of the time it was a minor royal property and finally the ruin that it is today.

An oasis of peace and tranquility amid one of the busiest parts of the country, the Basingstoke Canal is a fully-navigable waterway which runs for 37 miles between Greywell in Hampshire and Woodham in Surrey. Built in the 18th Century, to allow barges to deliver agricultural produce from Hampshire to London, it fell into disuse with the advent of the railways and was for the most part derelict by the 1940s.

A short walk along the towpath to the west of St John's Castle lies the 1,120m long Greywell Tunnel. In the latter half of the 20th Century, the roof collapsed - a restoration job too far for the canal society volunteers. Greywell marks the western end of the navigable section, although ramblers can follow the footpath through to Basingstoke. Today, the disused Greywell canal Tunnel houses an important bat colony.

Just a short distance away are the ruins of Basing House, a major palace that was fortified during the English Civil War. It once was as glorious as Hampton Court Palace, but it suffered so badly at the hands of the Parliamentary forces that today just the foundations and Civil War fortifications remain.

1Not to be confused with Bodiam Castle, a National trust property in Sussex. Bodiham is a much larger 14th-Century castle in an excellent state of preservation.2The canal now passes to the south of the site, and is a much later addition to the landscape. In fact, it takes a little effort to find the river.3The moats and the palisade were additions between 1216 and 1330.4The evidence of the first structures, found during excavations, were a richly decorated stone doorway and several pits. Public records show that the total spent on works to this site, from 1207 to 1214, was £1,000.5King David II of Scotland, Son of Robert the Bruce.6Act 1 Scene 3.