Learning Chess - an Allegorical Tale Content from the guide to life, the universe and everything 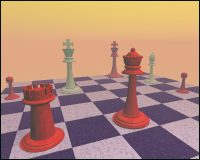 Chess looks daunting when you're first introduced to it. The main problem is learning the different pieces and how they move around the board. One way to overcome these initial difficulties is to make the unknown into something familiar. This approach is for children and adults alike, and is of course only a first step - an easy way into beginning to understand chess. To find out about chess in greater detail go to the Edited Guide Chess Entry. If you tell this story to someone, indicate the various pieces and their movements as you tell it, either by physically handling the pieces or by showing it as a diagram.

Once upon a time in a faraway kingdom there lived an old king. (Introduce the king piece). He was very old and couldn't get around his kingdom very easily. (Indicate the king can only move one space at a time).

He had a young wife (queen) who would travel all over the kingdom on his behalf. (The queen moves in almost all directions, any amount of spaces).

He also gathered around him some trusted advisors: two men of God (bishops), who, although they travelled on different religious paths, still criss-crossed the Kingdom on behalf of their king. (Bishops travel on different colours, in a diagonal line).

He also had two knights. Now, you've heard of the knights of the round table, well, these were knights of the L-shaped table. They would only travel in an L-shaped pattern. They rode horses which enabled them to jump over any obstacle. (Indicate knight movement pattern).

The king was very wealthy and owned two castles, and when he didn't like the position of one of them he would have it demolished and then rebuild it anywhere along the length or breadth of the Kingdom. (Castles move horizontally or vertically on the board).

The majority of the king's people were, of course, peasants, mere pawns in the game. They followed the straight course of their own lives until service to the King made them deviate from their chosen paths in order to do battle. (Indicate that pawns move in a straight line unless they are attacking, which they do diagonally).

The opposing force to the king was a mirror kingdom, with a king, queen, two bishops, two knights, two castles, and pawns. The objective for each was the same - to capture the other's king.

And that's how chess is played.