Brendan Behan, 1923 - 1964: Irish Poet and Playwright Content from the guide to life, the universe and everything 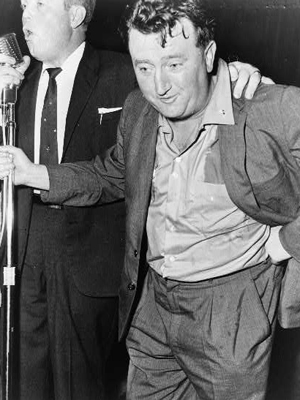 Brendan Behan, the Irish poet and playwright, was known for his sharp wit and skill as a raconteur. He was also known for his drinking and, to some, unsavoury political background - he spent several years in various British penal institutions for IRA activities. But his earthy, satirical writing is marked, not by political rant or social bitterness, but by an acute commentary on the lives of common people. In spite of the poverty of his childhood, the alcoholism that killed him at the age of 41, and his tendency to play up to the stereotypical foreign image of the drunken, sociable Irishman, Behan contributed greatly to his country's literary heritage, and to our understanding of the human condition.

The Bible was a consolation to a fellow alone in the old cell. The lovely thin paper with a bit of mattress stuffing in it, if you could get a match, was as good a smoke as I ever tasted.
- Brendan Behan

When Brendan Behan was born in Dublin in 1923, his housepainter father was in prison for his participation in the Irish War of Independence. Behan was raised in a very Republican family - his uncle, Peadar Kearney, was the author of the Irish National Anthem. As a child, Behan was a member of the Fianna Éireann, an IRA-affiliated youth organization, and in the 1930s worked as an IRA messenger.

In 1939, when he was sixteen, Behan was arrested in a Liverpool hotel with a suitcase full of dynamite intended for use in blowing up a battleship. He spent most of the next three years in borstal1 in Suffolk, where he seems to have made many friends among both warders and inmates, and to have read a great deal in the library. Upon his release he returned to Dublin and took up the family trade of housepainter2, but after a confrontation between the police and the IRA during which he shot at a detective, he was sentenced to 14 years for attempted murder and imprisoned, first at Mountjoy Prison and then in Curragh Military Camp.

It was while he was in Curragh Internment Camp that Behan first wrote stories based on his borstal experiences which were published by Sean O'Faolain in the journal The Bell, and which later appeared in his full-length book Borstal Boy (which has been filmed). He also learned fluent Irish there, as conditions there were quite different from those in an ordinary prison, and many of the IRA prisoners were well-educated people with knowledge to share3. Behan was released under the general amnesty of 1946.

The most important things to do in the world are to get something to eat, something to drink and somebody to love you.
- Brendan Behan

After being briefly incarcerated in Manchester for assisting in the escape attempt of an IRA prisoner, Behan settled down, more or less, to a writing career. Following his deportation from Britain in 1952, Behan lived in Paris and Dublin, writing for Radio Éireann and the Irish Press. He also worked at times as a merchant seaman, and wrote pornography under an assumed name.

His big break came in 1954, when his play The Quare Fellow was performed in Dublin's Pike Theatre. The play was later staged by Joan Littlewood4 at the Theatre Royal in London's East End, and Behan became famous.

Set in an Irish prison in the 1950s on the day before and the morning of an execution, The Quare Fellow uses music, wit and a keen observation of human behaviour to explore the question of capital punishment.

The Quare Fellow was followed by the plays The Big House (1957) and An Ghiall (The Hostage) (1958). The latter, a play Behan wrote in Irish and later translated into English, deals with the execution of an IRA prisoner by the British and the death of an English hostage taken by the IRA in reprisal. As usual with Joan Littlewood's productions of Behan's work, music and wit are used extensively in the English version to give a more Brechtian feel.

Death of a Poet

Critics are like eunuchs in a harem; they know how it's done, they've seen it done every day, but they're unable to do it.
- Brendan Behan

Soon Behan was being sought after on both sides of the Atlantic. And being wined and dined by publishers and critics was not a good thing for someone who described himself as 'a drinker with a writing problem'. By the early 1960s, Behan was very ill, suffering from a diabetic condition that was aggravated by his alcoholism. He found it difficult to write. When the Guinness company commissioned him to write a slogan for them, he sat around for months, drank all the free beer they sent him, and came up with the slogan 'Guinness makes you drunk'.

Recognising Behan's talent as storyteller, his New York publishers put him in front of a tape recorder and transcribed what he said. The results were published as Brendan Behan's Island (1962), Brendan Behan's New York (1964), and Confessions of an Irish Rebel (published posthumously in 1965). Although lacking in the piercing insight of his early work, the wit and humour still shine, and the stories engage.

Behan died in Dublin in 1964. His wife, the painter Beatrice ffrench-Salkeld, gave birth to their only child, a daughter, later the same year.

The IRA, which Behan had once invited to 'shoot him in absentia'5, accorded him an honour guard, although they waited until the officials from the State funeral had left before firing the traditional farewell salute over his grave.

Behan is buried in Glasnevin Cemetery in Dublin, an historic place that contains the remains of many of Ireland's most important historical figures. His gravestone features the inscription 'Breándan Ó Beacháin File Fiáin Fearúil Feadánach'6, which roughly translates as 'Brendan Behan, wild, manly poet and piper'.

Although Behan began life in a time of turmoil and civil war, his legacy remains one of tolerance and respect for the humanity in others, and of caring and concern for the plight of those who are victims of history, not its makers. As he once said, 'I have a total irreverence for anything connected with society except that which makes the roads safer, the beer stronger, the food cheaper and the old men and old women warmer in the winter and happier in the summer'.

Thank you Sister, and may all your sons be bishops.
- Brendan Behan's last words

1A kind of reformatory in Britain, since replaced by young offender institutions.2A respectable trade also followed by Behan's uncle, Peadar Kearney.3One of them, Máirtín Ó Cadhain, later became Professor of Irish at Trinity.4For more on Joan Littlewood and her influence on the British stage, see this article from the Northumbria University website.5After being courtmartialled by them in absentia.6Pronounced 'Filleh fee-awn farroul fadhawnach'.