Margaret Sanger - Pioneer in Birth Control and Women's Rights Content from the guide to life, the universe and everything 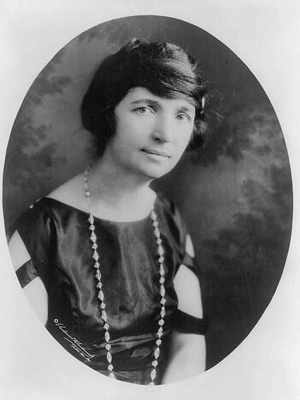 Characterised by women's rights leader Gloria Steinem as a woman who 'pioneered the most radical, humane and transforming political movement of the century'1, and by Anthony Comstock, champion book-burner, as a purveyor of 'smut', Margaret Higgins Sanger was a woman of great courage and vision who pioneered the struggle for women's reproductive rights in the United States. Speaking of her in 1931, HG Wells wrote:

'When the history of our civilization is written, it will be a biological history, and Margaret Sanger will be its heroine.'2

The idea taken for granted by many in the West today - that women have the right to control their own bodies, to choose when and if they will bear children, and how many they will have - was not accepted during Margaret Higgins' childhood. As she watched her mother die, worn out after 18 pregnancies and 11 live births, Margaret began the life's journey that would bring her fame as a leader in the birth control movement, but would also bring persecution and imprisonment at the hands of her detractors. Even today this woman, the founder of Planned Parenthood, is vilified by some as a proponent of abortion, a racist and a eugenicist3.

Margaret Sanger's struggle was an arduous one, but one which opened the way to reproductive freedom in the United States and elsewhere in the world, and which has saved countless lives.

The Beginning of a Movement

Margaret Higgins was born on 14 September, 1879 in Corning, New York to Irish-American parents, the sixth of eleven children. Her stonemason father was a freethinker, her mother a devout Catholic. With the financial help of her older sisters, Margaret attended Claverack College and Hudson River Institute in 1896 and then entered the nursing programme at White Plains Hospital in 1900. Only months before completing the programme, she married architect William Sanger. The couple, which eventually had three children, settled in a suburb of New York City.

In 1910, the Sangers moved to New York City, as William Sanger wished to give up his work as a draughtsman in order to become a painter. Margaret Sanger used her nursing skills to help support the family. The Sangers became part of the bohemian culture of Greenwich Village, meeting intellectuals, artists, and activists such as Emma Goldman. Margaret Sanger became a member of the Socialist Party, and took part in labour actions.

It was her work as a visiting nurse, however, that awakened Sanger's interest in sex education, which she saw as essential to women's health. Beginning in 1912, she authored a column on sex education for the New York Call. This column, entitled 'What Every Girl Should Know', sought to put common-sense information into the hands of women and girls. The suppression of her column on venereal disease on the grounds of obscenity was her first encounter with the censorship and prejudice that would dog her work.

Sanger began to believe that limiting family size was the key tool for working-class women seeking to liberate themselves from poverty. The main problem was the lack of reliable information on the subject. So Sanger began challenging the Comstock Law, the 1873 federal law that banned the dissemination through the mails of pornographic material - includingcontraceptive information.

In 1914 she published the first issues of The Woman Rebel, a feminist monthly that advocated the right of women to practice birth control. Three issues were banned, and Sanger herself was indicted for violating the law against sending obscene materials through the mails. Sanger jumped bail and left for England, where she continued to lobby leading thinkers in her crusade for reproductive freedom.

When her husband William was jailed the following year for distributing one of her pamphlets, Margaret returned to the US to face charges, but when her five-year-old daughter died suddenly, public sympathy became so overwhelming that the prosecution was dropped. Emboldened by this victory, Sanger went on a nationwide tour to promote her ideas. She was arrested in several cities, but her head-on approach and unabashed style won her a wide audience.

Contraception in the Early 20th Century

Margaret Sanger wanted women to be able to control the timing of their pregnancies. To that end, she supported the use of contraceptive devices - ways to prevent conception. At first, she promoted the use of woman-controlled contraceptives such as suppositories or douches, but in 1915 she learned of a new device, the diaphragm, a medically-fitted flexible appliance that would serve as a sperm barrier.

Sanger opened the first birth control clinic in the US in Brooklyn, New York, in 1916 - and was immediately arrested. However, a new legal loophole permitting physicians to provide contraceptive information for medical reasons allowed her to reopen with a staff of female doctors and social workers. The Birth Control Clinical Research Bureau served as a model for other clinics.

In the coming years, Sanger's movement gained acceptance and prestige, garnering support from the medical profession, social workers and the liberal wing of the eugenics movement. Although her efforts to change anti-contraceptive legislation largely failed, she did succeed in bringing about a court ruling exempting physicians from the Comstock Law. So, although the ban on importing contraceptive devices for personal use was not lifted until 1971, she had succeeded in making it possible for women to obtain them through their doctors.

By the late 1920s the birth control movement in the US had become middle-class and mainstream, and Margaret Sanger was considered too radical for her own movement. She resigned from the American Birth Control League, and throughout the 1930s, 1940s and 1950s continued working on an international basis to stem the tide of overpopulation, particularly in the Third World.

In 1965, a decision by the US Supreme Court finally legalised the use of birth control by married couples. Only a few months later, Margaret Sanger died in a Tucson, Arizona nursing home.

In 1953 Margaret Sanger recorded a statement for Edward R Murrow's radio programme, This I Believe. In it she says:

'This I believe, first of all; that all our basic convictions must be tested and transmuted in the crucible of experience - and sometimes, the more bitter the experience, the more valid the purified belief... This I believe - at the end, as at the beginning of my long crusade for the future of the human race.'

No one could have said it with more justification.

Although Sanger's efforts have been honoured in many quarters, there have been detractors, ranging from contemporary self-appointed guardians of public morals to other, more serious critics, who have detected uncomfortable strains of racism, elitism and the negative aspects of the eugenics debate in her writings. She has been accused of being prudish and anti-sex on the one hand, while shocking people with her frankness on the other.

It cannot be denied that Margaret Sanger shared many of the ideas of her time - ideas which are now known to be false, such as the notion that Down Syndrome is inheritable. In common with almost all people of her time, she used words such as 'feeble-minded' and 'imbecile' in her writings. But her alliance with the liberal wing of the eugenics movement was largely one of policy, in order to get influential physicians on her side.

Although some of the beliefs she espoused are considered racist, Margaret Sanger fought for the rights of minorities. In 1930, she opened a family planning clinic in Harlem, endorsed by no less than civil rights leader WEB DuBois.

In spite of these limitations and errors, the modern reader would do well to take a look at Margaret Sanger's work and recognise it for what it is: a bold pioneering step into the light of reason from a time of repression and inequality.

1In 'Margaret Sanger - Her crusade to legalize birth control spurred the movement for women's liberation', The Time 100, available online.2Quoted in Steinem, ibid.3Generally speaking, eugenics is the movement to use modern discoveries in genetics to eliminate 'undesirable' traits from the human genome.