Anglo-Saxon Isle of Wight: Churches Content from the guide to life, the universe and everything 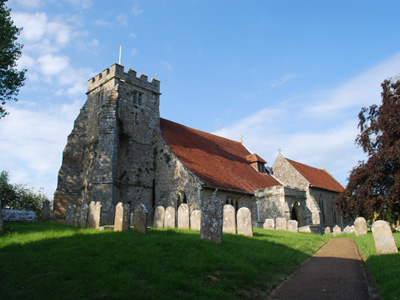 In many ways, churches are what we know most about, in the way of Anglo-Saxon life. They were among the few buildings Saxons built of stone, and after Cædwella brought Christianity to the Island, quite a few Saxon churches were built. Sadly, though, only two churches retain their Saxon walls - Arreton's Church of St. George and Freshwater's All Saint's Church, neither of which are of early Saxon date, as the Island was converted to Christianity quite late.

Yet despite this we can still learn about Saxon churches from the dedications of present day churches, from the churches that were built on the site of previous Anglo-Saxon churches, and from other sources, such as the Domesday Book.

Of the two churches that containing Saxon construction, Arreton's church is perhaps the most beautiful, and retains more of its original shape. Arreton itself is one of the oldest parishes of the Island, and the largest of the original seven, stretching from the north to the south coast. The church itself was originally the private chapel of the lords of Arreton Manor, which is also Saxon, and mentioned in Alfred the Great's will of 901.

Although most of the church that stands today was built after the conquest, some of the Saxon building has survived, thanks to the impressive stone tower which was built in the 13th Century. When this was made, the original external Saxon wall on the west end became an internal, and protected, wall. This wall has therefore survived, along with a Saxon doorway and window.

Freshwater, on the other side of the Island, is the second church retaining some Saxon construction, and it too is only visible if you know where to look. The actual date of All Saints' Church is not known, yet it is believed that it could date back to the last two decades of the 7th Century, when the Island was converted to Christianity. The church is also mentioned in the Domesday Book of 1086, yet nothing is known of what happened in the interim 400 years.

From the outside, none of the remains of the Saxon church are visible. It is believed that the original Saxon church was a simple aisle-less building, and that over the centuries it was expanded on all sides until the Saxon remains lay engulfed in the middle. Chapels were first built north and south of the original church, and in the 12th Century much of the Saxon structure was removed to form an arcade and aisle. In the 13th Century a new nave was built, and in the 15th the unique tower, north and south porches were built, and the nave roof and chancel arch were expanded.

What has remained of the Saxon church are Saxon quoins1 on three of the nave piers. It is believed that they were the corners of the original Saxon nave. The fourth is believed to have been lost in the major restoration work that took place in the 19th Century.

Many of the churches on the Island are dedicated to Saxon saints and martyrs. Most of these are old churches in their own right, rebuilt on the site of earlier Saxon ones.

With all the legends surrounding Saint Boniface at Bonchurch, having a church dedicated to him there is unsurprising. Saint Boniface's Church is the second smallest on the Island, at 48 feet by 12 feet, seating no more than 80 people. Yet despite its graceful size and beauty, it is a Norman church, believed to have been rebuilt by monks who immigrated shortly after the Norman Conquest.

The Royal Church Of Saint Mildred is now more fondly remembered for its connections with Queen Victoria than its Saxon heritage.

Saint Mildred was an Anglo-Saxon princess, and there was a church dedicated to her on the site of the Royal Church in Saxon times. It is believed that this church stood until 1804, when it was completely demolished by John Nash, to make way for a new church. This church only lasted 50 years when it was demolished and a new church was built by Prince Albert.

This was the church in which Queen Victoria and Prince Albert worshipped during their lives, it was here in 1885 that Victoria's daughter Princess Beatrice married Prince Henry of Battenberg, and it contains both Prince Henry's sarcophagus, and the decking from HMS Blonde which carried his coffin back from Ashanti. It also has the grave of Naval architect Uffa Fox, inventor of the airborne lifeboat.

The church itself is breathtakingly beautiful, and has become in many ways more of a tourist attraction than a place of worship. Sadly, however, the only thing Anglo-Saxon that remains is the name.

Saint Edmund's Church, Wootton, is a small church dedicated to Edmund, King of East Anglia. In 870, the Danes invaded his kingdom, and despite Edmund's gallant attempts to protect it, he was outnumbered and captured. The Danes had been impressed by his courage, and offered him his kingdom and his life if he would rule East Anglia as sub-King under them, and not Wessex, and worship Odin, and not Christ.

Edmund refused to do this, and so he was tied to a tree and his body was riddled by arrows. Miracles occurred at the site of his burial, and he was canonised. Many Saxon churches in East Anglia and Wessex were dedicated to him.

The church at Wootton was originally the chapel of Wootton Manor, which dates from Saxon times. Immediately before the Norman Invasion the Manor was owned by Queen Edith, wife of Edward the Confessor. Since then, however, the church has been re-built and restored many times, and the oldest part of it, the Norman nave, only dates back to 1087.

Churches Built On The Site Of Saxon Churches

Many believe that the first church on the Island was at Brading, even before Cædwalla's conversion of the Island to Christianity. Wilfrid, Bishop of York and missionary, is recorded to have spent some time at Brading, preaching to the population.

Despite this, there is no church at Brading among the 10 Island churches mentioned in the Domesday Book of 1086, and the oldest part of the current church is 12th Century. Brading church is, however, sited near what was the harbour of Brading Haven - the site of the old Saxon village - and Saxon bones have been discovered underneath the present church and graveyard. Yet nothing more remains.

Calbourne Church is recorded to have been granted to the Bishopric of Winchester in 826 by King Egbert, and is recorded in the Domesday Book.

It is a church that has suffered constant rebuilding and restorations, and the oldest part of the church that remains dates back only to the 13th Century.

Although the church at Gatcombe is a fairly typical 13th Century church, it does have Saxon connections. The Domesday Book records that there had been a Saxon manor, which in Edward the Confessor's time had been owned by three brothers. It is believed that the manor house had a private chapel too, but one that had been built of wood.

The most interesting aspect of Saint Olave's Church is the legend of how, in 1831, Lucy Lightfoot time-travelled back to 1364 to join the volunteers of Peter I of Cyprus in their attack of the Mamelukes of the Holy Land.

The church was mentioned in the Domesday Book, and shortly after the Norman Invasion of 1066, was given by William FitzOsbern, Lord of the Wight and Kinsman of William the Conqueror, to his Abbey in Lyre, along with the churches in Arreton, Freshwater, Godshill, Niton, Newtown and Whippingham. The church which survives in Godshill now is the fourth on the site, and dates back to the 14th Century.

In Saxon times, on the site of what is now Saint John The Baptist's Church, was a church dedicated to Saint Michael. This was demolished shortly after the Norman conquest, and the church on the site now dates back to the late 1070s/early 1080s, with parts added in the 13th, 14th and 16th centuries as well as major restoration in 1864.

Unlike Niton Church, its original dedication is unknown. Shalfleet Church was known only as 'Shalfleet Church', until in 1964 it was dedicated to Saint Michael the Archangel.

Shalfleet itself is one of the oldest villages on the Island, the first record of it dating back to 838. The church is also mentioned in the Domesday Book, in which Shalfleet was one of the 10 parishes on the Island. The Domesday Book also states that in Edward the Confessor's reign, Shalfleet Manor was worth £20, but in 1086 was only worth £15. The village mill at the time was worth 11p.

The oldest part of the church today is the tower, which dates back to 1070, shortly after the Norman Conquest. Its walls are 5 foot thick, and it was built as a refuge in times of invasion.2

The Church of the Holy Cross in Binstead is another church that had existed in Saxon times and was later rebuilt by the Normans. The oldest part of the church itself is the chancel, which dates back to the 13th Century. Yet in the exterior of the church is something far older.

In the South Wall is the remains of the original Norman doorway to the church. After the church was rebuilt in 1844, this was re-erected here. It is believed that the odd figure at the top of the arch is a Saxon pagan sculpture, the exact nature of which is unknown.

1Corner stones.2This could be viewed as being built 4 years too late.