Tapirs Content from the guide to life, the universe and everything 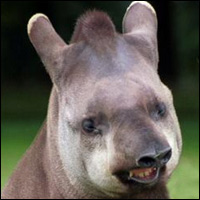 Tapirs are members of the order of Perissodactyla, which is the order that includes other odd-toed ungulates such as horses, rhinoceroses and hippopotamuses. They are approximately the same size as a donkey and can live to around 30 years of age.

The tapir's body is heavy, round in shape with a curved back and is covered with short, bristly hairs. Their ears are large and are similar to those of the rhinoceros or hippopotamus. The front of the body tapers to allow for swift movement through the thick underbrush of the jungles that they inhabit. They have four toes on each front leg and three toes on each hind leg. Tapirs have very short, thick tails. The snout and upper lip protrude into a short, prehensile trunk which the animal uses to browse vegetation. The South American species have an unobtrusive mane. The body mass of adult tapirs ranges from 200 to 400kg and the female is often larger than the male. This species has evolved little in the last 20 million years.

There are four species of tapir — three from Central and South America and one from Asia:

This species can be found in Central America, including Mexico and the northernmost part of Colombia. Its colour is usually brown, with a reddish area on its back and a large cream-coloured patch extending from its face down the throat to the chest. There are distinct, characteristic dark spots on the face below each eye. Baird's tapir can be distinguished from the Brazilian tapir by the flattened shape of the neck, similar to that of a cow. This tapir is the largest of the American tapirs.

This species is generally smaller than Baird's tapir and is widely found east of the Andes in South America. They are found mainly in Brazil, as well as in other areas of the wet jungle of South America from Mexico to Ecuador. The most prominent feature of the Brazilian tapir is the crest along the back of the neck, which is believed to give some protection from jaguar attacks. It gives the tapir's face a concave, bowl-shaped look. Its colours are normally dark tan to brown and there is more colour variation among individuals of this species than in the other species.

This species lives mainly in the Andes among the elevated, temperate forests of Colombia, Ecuador and possibly northern Peru1. Closely resembling Baird's tapir in shape, the mountain tapir would be difficult to mistake for either South American species in that it is smaller in size, has longer fur and a distinctive white pattern around the lips. The fur colour ranges from grey-black or reddish-brown depending on its geographical location.

This species used to inhabit much of Southeast Asia, including the countries of Myanmar, Cambodia, Malaysia and Indonesia, although it is no longer found in some of the areas of its former habitat. Easily distinguished from its American cousins, the Malayan tapir is considerably larger in size2 and has a distinct colour pattern on its body. The legs, chest, shoulders and head are black, while the back from the shoulders to the rump is brilliantly white.

Tapirs are crepuscular3. They are shy, docile creatures that seek the shelter of the forests for most of the day and have an acute sense of smell and hearing. Tapirs lead mainly solitary lives, with the exception of the unweaned calves. However, new evidence is coming to light that adults may live in pairs and mate for life. Communication is performed with high-pitched whistling sounds and their calls are often mistaken for those of jungle birds. They also communicate by spraying urine to mark their territory. Males are generally more territorial than females.

Tapirs are good runners, divers and swimmers. They are able to deter predators, such as jaguars or pumas, by snapping at them and biting them with their large, muscular jaws. Their thick hides also serve them well in an attack. They may run to water if threatened and wait there until the danger has passed.

Tapirs reach sexual maturity between 18 and 24 months. Breeding can occur at any time during the year; the female becomes receptive once a month. Tapirs can produce a calf about every two years. Gestation lasts 390 days (about 13 months), resulting in a single birth, although some tapirs will occasionally have twins. Newborn tapirs weigh between 16-17kg and are weaned between six and eight months of age. Calves of all species of tapir are covered with striped markings to camouflage them against the jungle background. These stripes will eventually disappear after the first six months. Calves will stay with their mother for approximately two years.

In the wild, tapirs eat aquatic vegetation, leaves, fruits or the green shoots of the common browsing plants. They have been known to clear small areas of forests for food. As they have a limited stomach volume, tapirs tend to eat frequently throughout the day. In captivity, they are fed on a diet of alfalfa, lettuce, carrots, apples, bananas and processed grain. Their favourite food, almost universally, is banana.

Tapirs will find their own sheltered places in the jungle or forest amongst bushes or trees. They will often choose a particular location so that they can smell another animal approaching. Some tapirs are said to sleep on ridges in the Andes, near a good draught, in order to detect scents on the breeze. Other tapirs have been observed sleeping partially submerged in the water of shallow streams. They often select these spots in order to keep themselves cool in the heat. They are able to remember where they have chosen to sleep and will regularly return to the same location.

Tapirs are commonly hunted for food and sport in their native habitats. In addition to this, their habitat is being destroyed to make way for agriculture and grazing. They are also susceptible to common domestic horse diseases. All species of tapir are either endangered or vulnerable. The ecology of the areas in which these animals live would suffer if they were to disappear, as they are a vital link in the dispersal of local plant seeds. Several organisations around the world are working to try to prevent the tapirs from becoming extinct.

1Although it is not certain that there are any mountain tapirs left in Peru.2In fact, the largest of all the tapir species.3Active during the hours of dawn and dusk.