Collar Stiffeners Content from the guide to life, the universe and everything 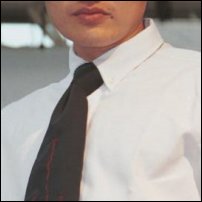 You will have noted and recorded the oddities of dress of these humans about us. In particular you will have seen some of the "mostly male" gender wearing strips of gaily coloured 1 cloth around their necks, known as "ties". The more observant among you will have also noted that these "ties" are covered at the neckline by an extension of the shirt; the collar. This is, presumably, a remnant of a previous century's fashion, the ruff. Collars, now, are a far cry from the heavily starched version in use a mere century ago*. Present day collars are soft, and need support if they are to make the right impression.

Stiffeners are all of a similar shape and size, say 5 cm long and 6-7mm wide, round-pointed at one end and completely rounded at the other. The precise dimensions will vary according to the type of collar they are intended to support. Not all are interchangeable. They are made of a variety of materials. Plastic, often. Metal, occasionally. Bone, historically. Card, temporarily. The material and indeed the thickness thereof is important, for it is that that governs the weight of the stiffener and hence the effect it has on the fall of the collar points.

Some stiffeners - it is appreciated that we do not all move in such rarified circles, but those of us who have can assure you that it is true - have inscribed or engraved upon them the makers name and/or the name of the retail emporium at which they - or the shirt - were purchased. There are specialist establishments that will, for a small sum, engrave the customer's name upon the stiffener, and several that will fashion for you stiffeners of silver or gold. A splendid idea for a gift you might think should you have an attachment to the sort of chap that wears a tie. A caution should be issued here, for there are some who write so-called jokes on their stiffeners. "Mine's a stiff one"* is one such recently noted. The mention of such gifts evokes memories of little sets of nicely thick stiffeners in a variety of weights and colours in a specially constructed roll of pocketed material. Truly a delight to give or receive.

There will come a time when even the most organised of chaps finds himself without a stiffener and with a pressing need for a smart point to his collar. Armed with scissors and one of those birthday cards that you forgot to give to the wife, should you have one, - it will be at the back of the bottom drawer in the dining room sideboard (the card, not the wife) - cut a neat and properly shaped stiffener and insert in collar. Double up for extra stiffness.

Neither Machine-Wash or Iron a Stiffener

An imperative. Always extract stiffeners before placing the shirt in the laundry basket. If you do not, the stiffener made of plastic will buckle and bend thus rendering it useless. A metal one may well stain the shirt and impede ironing. A temporary card one will turn to mush and a bone one will break. There is no alternative to removal. Your gentleman's gentleman will, of course, do this for you, if so instructed, but you can never be quite sure in this day and age, so best do it yourself. You will find a suitably sized indentation on top of your trouser press in which to leave the removed stiffeners, alongside your cuff-links. You may even have a silver tray on your bedside table for the same purpose.

Occasionally stiffeners will break in-situ. Especially the cheaper plastic 'given away with the shirt' type. You are left with an unreachable point buried deep in the stiffener pocket. If left there, it will spoil the lie of the collar point. There are two alternatives. You can attempt the pinch and wiggle technique from the outside. This is difficult and needs practice, but is possible, though requires a re-ironing of the collar afterwards. The alternative is to get a pair of tweezers. These may be obtained from a wife - goodness knows what they are used for (tweezers, not wives) - or you may find one in that manicure set that was given to you seven christmases ago by a previously unknown niece trying to curry favour with you, an incorrectly supposed to be rich uncle. It will be a the back of the bottom drawer in the dining room sideboard. With persistence and careful manoeuvring you may get the tweezers to a sufficient depth in the little pocket and you MAY be able to get them to open sufficiently to grip the remains of the stiffener. Good luck! Not an easy task.

Other Uses for Collar Stiffeners

They are most often used to jam the extraction pump of a washing machine. Should you (or your servants) not be enamoured of your washing machine but feel guilty about exchanging a perfectly good and working piece of machinery on a mere whim, simply slip an especially sturdy collar stiffener into the wash load. The pump will jam, and you can explain from the middle of a flooded kitchen to a passing spouse that you had known all along that the thing was broken and that, obviously, you need, immediately, the latest and greatest model to replace it. 2 If you are a wife (or similar) this ruse has the great advantage of enabling blame to be lain entirely at the collar of the husband - the stiffener is undeniably his - and he can thus be impelledPlease excuse the pun. Pump... impeller... Oh, never mind! to pay for the new machine.

They are well designed to assist in the extraction of APS film cartridges from a camera.

Where do they go to, my lovelies?

The collar stiffener belongs to that class of objects that disappears without trace. Socks and wire coat-hangers are others, among many. They have no known home on this planet. Answers must be sought in parallel universes.

1Except at funerals when more sombre shades are the norm.2 This will look remarkably like the machine it replaces. Washing machine design seems stuck in a time warp. Only the electronics vary.