The Claque - Art Appreciation Or Pest? Content from the guide to life, the universe and everything 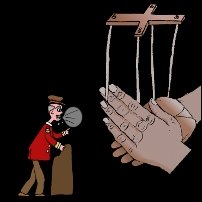 Everybody loves a good round of applause when they've done well - nobody more so than actors, many of whom seem to live on nothing but nerves, coffee, cigarettes, and praise. But what to do when faced with deafening silence? A few half-hearted attempts at clapping that soon die off? An auditorium that's only half empty because the other half of the audience has fallen asleep? Could it be time for that horror of horrors, serious introspection? Might it be that the critics are right, that this brilliant career could only be improved by cutting it short and becoming a taxi driver?

Fortunately, at heart, most people fear being different - a little peer pressure is often all that's needed to change their minds. If everybody else likes something, it must be wonderful... Clever people have always made use of this fact to further their own causes. The Roman emperors are said to have used soldiers to pad out the audience while they were speaking, making them cheer on command. Most notable among these is Nero - according to the historian Suetonius, he ordered 5,000 soldiers to attend every staging of any play in which he performed, to shout praise and, presumably, intimidate others into doing the same. A somewhat more subtle form of such organised emoting was used in ancient Greek theatre, where the audience was led in its reactions - it is said that Philemon defeated Menander in the comedy competitions at the theatre of Dionysus in 4th-Century Athens not by virtue of better material, but because he distributed his supporters in the theatre, with instructions to laugh at strategic points.

The Development Of The Claque

Jean Daurat, a 16th-Century French poet and classical scholar, used a variation on this theme to fill the house at his performances, giving away free tickets to friends, who were guaranteed to cheer him. In 1770, according to the 'memoirs of Bachaumont'1, it was common practice among actors at the Comédie Française to distribute free tickets to supporters after a failed debut performance - and to pay audience members to applaud. These were known as claqueurs, from the French claquer, to clap; as a group, they formed a claque2. In the 18th Century, Claude-Joseph Dorat, an unfortunately second-rate poet3, was organising his own claques to support his plays - and lending them to others. His contemporary, Jacques Rochette de La Morlière, took this one step further, having his cronies applaud those writers who had given him a token of their esteem - preferably in monetary form - and booing4 those who didn't pay.

By 1820, the practice had developed so far that a M Sauton set up the first professional claqueur service in Paris. These were soon able to supply up to 500 professionals for any performance. Each claque consisted of different specialists, headed by a chef de claque. The commissaires memorised the play's script, the better to point out interesting bits to their neighbours. The rieurs were usually employed for comedies, laughing loudly at all the jokes. The chatouilleurs ('ticklers'), made jokes and comments of their own to keep nearby audience members entertained. The pleureurs were more often pleureuses, women who cried dramatically into their handkerchiefs during the sad parts of a melodrama, or better yet, had forgotten their handkerchief and needed the help and comfort of a nearby gentleman. The bisseurs, finally, had the job of standing up at the end of the play and shouting for an encore5.

[The claque is] the avowed symbol of the Public's inability to distinguish by itself the worth of what it is listening to.
- Auguste Villiers de l'Isle-Adam, 19th-Century French writer

Nothing was left to chance. The chef de claque, sometimes styling himself an entrepreneur de succès dramatique, met with the author of the play, the stage manager, and even the actors before the performance, the better to choreograph the work of the claqueurs and work out their optimum distribution in the audience. He then attend the performance himself to further direct their work, calling on them as required to bolster or provoke the audience's reactions. Each of the better-known Parisian theatres soon had its resident chef de claque, with 'Pompon at the Vaudeville, Sauton at the Varietes, Ely at the Cirque-Olympique and Lazare at the Folies-dramatiques'. These men had great influence, and their work could make or break a career6 - so a good part of a theatre's time and budget soon went toward keeping them happy.

The claqueurs at our theatres have proven themselves to be canny practitioners; their craft has been elevated to an art.
- Les Soirées de l'Orchestre, 1854, by the composer Hector Berlioz

As so often happens in these cases, the chefs de claque exploited their privileged position. Actors and singers soon found themselves coerced into paying off the claques7, lest their performances be booed - especially those in smaller, badly-paid roles still hoping to break through. The claques, not the critics, dictated what was fashionable, and the chefs de claque sometimes doubled as marchands de billets, ticket-sellers, thus dictating the prices for the entertainment as well. A further offence to the sensibilities of the rich was that the lower ranks of the claques often consisted of unskilled labourers supplementing their meagre income8 - the performances took place after normal working hours, and for many, it was the only chance to take part in the diversions of their alleged betters. As the claques gained acceptance, they lost their sense of subtlety, annoying audiences and performers alike. The scourge soon spread - most notably to La Scala in Milan, to Vienna, to Covent Garden in London, even as far as the Metropolitan Opera in New York - though nowhere was it as ubiquitous, well-organised and professional as in France, which had developed a veritable Claquomanie.

The Decline Of The Claque

Toward the end of the 19th Century, the claque began to lose favour. The fashion of the day turned toward a more quiet, respectful audience. A German etiquette book of the time9 admonishes the audience to refrain from laughing or crying openly, from commenting to its neighbours, and from clapping too loudly, noting that silence often honours an artist more than wild applause. It also remarks that one must not hiss at a performance one doesn't like - 'Letzteres ist höchstens dann gestattet, wenn es gilt, eine aufdringliche Claque in ihre Grenzen zu verweisen' - 'the latter is only permissible when it is needed to put a pushy claque in its place'.

The new concert etiquette10 was developed partly at the behest of conductors like Arturo Toscanini. While Richard Wagner instructed his audience not to make distracting noises at a concert held in Bayreuth in 1882, Gustav Mahler actively discouraged claques, going so far as to specify in the score of the Kindertotenlieder11 that there was to be no applause during the movements. Theatres soon followed suit, and claques all but disappeared. Their last stronghold was the opera, where the normal rules don't apply anyway, with singers frequently being applauded immediately after their solos, despite the music and chorus continuing.

Though the formalised, professional claque has all but disappeared, the practice of filling the audience with friends and family for moral support - or to sell more tickets - continues unabated, especially in amateur productions. However, with television replacing the theatre or opera as the normal evening activity, another variant has arisen - the laughtrack. A standby of sitcoms - or anything that's intended to be funny - this 'canned laughter' is meant to show the audience where the jokes are, and hopefully entice it to laugh, augmenting and eventually replacing the live studio audience. Where live audiences are still used, they can be equally directed, with gestures or signs to tell them when to applaud, when to laugh, and when to be silent.

Today, the word 'claque' is often used in a more political context, to refer to sycophants used to swell the ranks by anyone giving a speech, making use, once more, of people's tendency to agree with what others seem to like. An example for this are the Jubelperser, a word now used almost synonymously with 'claque' in colloquial German. These so-called 'cheering Persians' were alleged supporters of Iran's Shah Mohammad Reza Pahlavi, who accompanied him on a state visit to Western Germany in 1967, during a time of political unrest12. A more recent example, also involving Iran, are the suspicions that President Mahmoud Ahmadinejad had photos of his victory rally digitally altered to make it look like he had more supporters, doing away with the need for paid claqueurs in favour of someone handy13 with Photoshop.

1Probably the 'Mémoires secrets pour servir à l'histoire de la République des Lettres en France depuis 1762 jusqu'à nos jours' or 'Secret Memoirs Serving as a History of the Republic of Letters in France from 1762 until Our Days', a collection of anecdotes and news items from 18th-Century Paris that is attributed to the French writer and critic Louis Petit de Bachaumont, though it continues after his death.2Pronounced klak. It's not to be confused with a clique; the two words are not related.3Besides organising claques, he used his money and influence to make sure his stories, plays, and poems were illustrated by excellent artists and printed in costly volumes.4Or, rather, showing disapproval the French way, by hissing.5'Encore' is French for 'again', but 'bis!' is used by French audiences to demand an encore.6A power which was shared by the journalists of the time.7At times, as described by Balzac, actors might pay off a claque hired by their rivals, so that they would not perform their duties - or would exaggerate so much that an annoyed audience would silence them.8A phenomenon encountered in Balzac's 'Lost Illusions'.9'Handbuch des guten Tones und der feinen Sitte von Konstanze von Franken' - originally published in the late 19th Century, reprinted in 1977 as 'Der gute Ton - wie benehme ich mich vornehm?'10This didn't prevent a complete collapse of social order at the premiere of Igor Stravinsky's ballet 'Le Sacre du Printemps' (The Rite of Spring) on 29 May, 1913, at the Théâtre des Champs-Élysées in Paris. The opening solo on bassoon with its purposely discordant accompaniment, combined with Vaslav Nijinsky's unusual choreography of violent dance steps depicting pagan rituals and fertility rites, was enough to split the audience firmly into supporters and opponents. They weren't content with vociferous arguments and cat-calls, but started a fistfight in the aisles, which soon developed into an all-out riot. Stravinsky ran from the theatre in mid-scene, allegedly in tears. The police were called at the intermission, but were not particulary successful at restoring order. However, the show must go on - the rest of the ballet was performed in pure chaos, with the impresario flicking the lights on and off to get the audience's attention and the choreographer shouting the count to his dancers, who were unable to hear the music over the noise. Stravinsky and Nijinsky were devastated, but the show's producer was delighted at the publicity gained through the scandal.11The 'Songs on the Death of Children', five of Friedrich Rückert's 425 poems on the theme, set to music by Mahler.12In truth, they were members of the former Iranian intelligence agency, SAVAK, disguised as demonstrators and planted to provoke and attack the protesters. This culminated in the death of the student Benno Ohnesorg at the hands of the police, and eventually sparked the 68er-Bewegung, the German students' protest movement.13Or not.